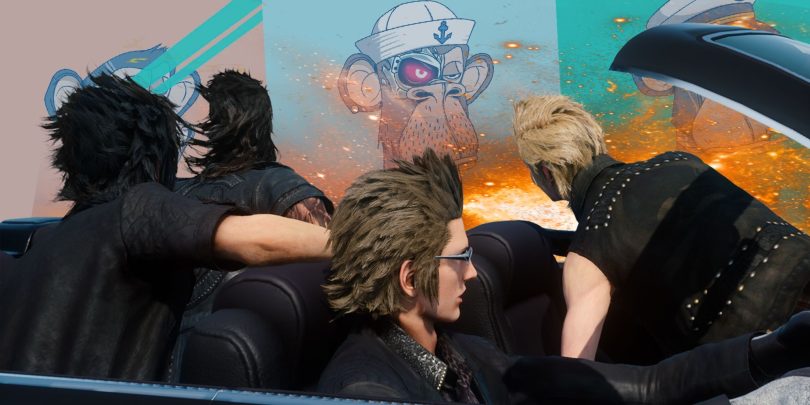 Square Enix has become Shinra Corporation. Final Fantasy 7’s evil organisation is known for its disregard for the planet, bringing about its destruction so long as it means maintaining profits and syphoning energy from its very lifeforce. Except instead of murdering millions by dropping plates on the slums beneath it, the company is instead taking its most iconic characters and selling them off as NFTs. It’s crass, exploitative, and fucking bullshit.

This comes mere weeks after the publisher sold off the likes of Tomb Raider, Deus Ex, and other Western properties for a pittance as it declared it will double down on blockchain technology instead of giving its creative teams the resources to work on exciting new projects or to delve into an overflowing well of legacy content that to this day is being ignored. Sod all that stuff, here’s some JPEGs with digital certificates that will cease to exist the second Square Enix stops caring. That’s not even in the terms and conditions, it straight up warns customers this is the case ahead of purchase because it really is that obvious.

Related: Stray Shows That Games Shouldn’t Be So Obsessed With Combat

If you aren’t familiar with non-fungible tokens and haven’t had your social media timeline flooded with crypto bros losing their apes these past months, they’re a form of digital currency that is both damaging to the environment and ultimately worthless because the market is so volatile and builds upon all manner of scams fueled by a mixture of glorified rhetoric and celebrity endorsement. However, like most failing tech fads, corporations have smelt blood in the water and must get involved in order to earn a quick buck.

Konami turned its beloved franchises into ugly pieces of art, while Ubisoft failed to interest players in dull cosmetic items for Ghost Recon Breakpoint. For a while it seemed like the bubble had burst, but now Square Enix has made an extremely late appearance that only serves to make it look more foolish than all those who came before it. You can tell it’s stuffy executives in a boardroom pushing for these products without really understanding them because it’s all about that sweet cheddar. It’s the most NFT friendly publisher out there.

I presume they can choose to sell it or watch as the value depreciates, but the fact it’s being packed in with the product takes agency away from us and labels this crypto nonsense as some form of gift we should be grateful for. It isn’t, and if people eat this up Square Enix will take it as a sign to double down on their business dealings and keep poisoning its own water. This is the company known for Final Fantasy, Dragon Quest, and goodness knows how many other classics, and instead of increasing this goodwill it is treating us like idiots for easy money. It doesn’t care about us, its creations, or the planet, the only thing it’s concerned about is money. Good luck spending it when the planet is on fire though.

I’ve always seen the metaverse and NFTs as corporate buzzwords, temporary flashes in the pan that will fade away as countless companies try and cement them as the status quo while the public shake their collective heads and move on. We aren’t buying it, and the crypto market is flooded with celebrities, scam artists, and toxic rhetoric that makes it clear there is no genuine artistic expression to be found here, just a thinly veiled excuse to make money at the expense of our environment because they’re too useless to do anything else.

NFTs are a product of greed, produced by those who already have plenty to their name, but can always have more of so the cycle continues and we’re the ones who will pay for it. Corporations jumping on this trend was always going to happen, but the majority of them crashed and burned while a few ignorant outliers hung on hoping for it to work out. Square Enix didn’t even do that much, it arrived late to the party and has failed to read the room to an extravagant extent. Millions adore Final Fantasy, but this legacy is being tarnished for profit in a way it can never be taken back, and I look forward to the day Square Enix has to pick itself up off the ground and beg for our forgiveness.

Next: Better Call Saul Just Broke Our Hearts, But It’s For The Best