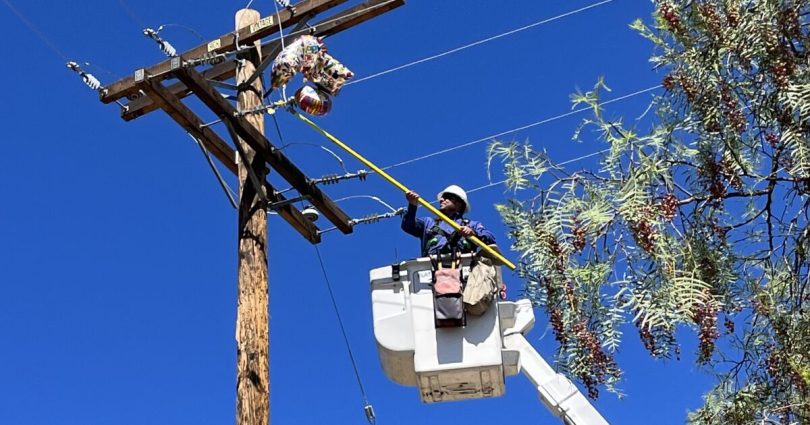 It’s all fun and games until the power line blows up.

Foil balloons commonly festooned at celebratory events such as birthdays and graduations inadvertently cause thousands of power outages. The shiny, metallic exterior of the balloons, such as Mylar, are electrically conductive and if they float into and get tangled in power lines, they can spark fires and cause circuits to shut down.

“Balloon safety can go a long way in preventing power outages and fires,” Quirk said in a statement. “With California facing increasing wildfire risks and electric reliability challenges due to climate change, it’s important that we do everything we can to mitigate fire risk and prevent power interruption.”

Working with engineers at SDG&E, Quirk introduced Assembly Bill 847 that requires sellers to transition to non-electrically conductive balloons by no later than Jan. 1, 2027. SDG&E collaborated with the Institute of Electrical and Electronics Engineers to ensure that foil balloons sold in California eventually meet IEEE requirements and don’t damage or interrupt the service of electrical lines.

The utility also worked with a leading balloon manufacturer, Anagram, to develop and test a balloon made of shiny material that is non-conductive. The balloon was successfully tested in conditions common to those of California’s three big investor-owned utilities — SDG&E, Pacific Gas & Electric and Southern California Edison.

SDG&E Chief Operating Officer Kevin Geraghty said the new balloons perform as well as those currently on the market and, “I would have confidence that you’re going to see it enter at a similar price point.”

Despite their non-threatening appearance, foil balloons cause major headaches, especially in California where dry conditions in recent years have made the threat of wildfires a year-round concern.

“These types of balloons are a scourge to the industry,” Geraghty said.

The internet is dotted with videos of electrically-conductive balloons coming into contact with power lines.

Utilities in some other states have lobbied for outright bans on metallic foil balloons but Geraghty said the phase-in period of more than four years will give the state’s balloon industry time to make the switch, “and it’s also a win for consumers who at the end of the day still want to use this product.”

AB 847 passed the Assembly floor and the Senate floor on unanimous votes.