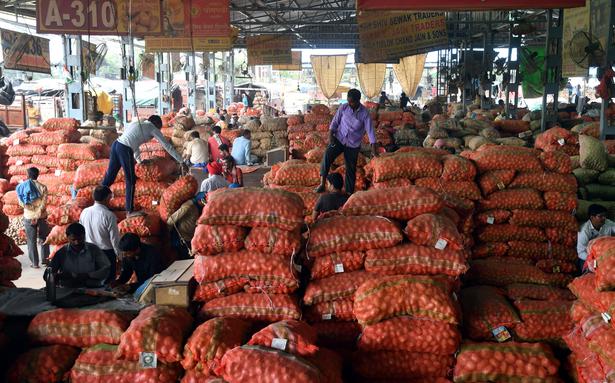 Cooling food prices may have helped moderate retail inflation to a five-month low of 6.7% in July, but there could be a reversal in August’s inflation print thanks to concerns about the uneven progression of monsoon through the country and other factors.

Price rise in food items had dropped to the lowest level since March 2022 at 6.75% in July, from 7.75% in June, and was seen as the key driver for bringing consumer price inflation below 7% after a three-month spell. In recent weeks, the government has imposed curbs on external as well as internal trade of food items like rice, atta (wheat flour), and tur dal (red gram), reflecting its recognition of their surging prices.

Food items constitute little over 45% of the Consumer Price Index (CPI) and the National Statistical Office is scheduled to release the August CPI on Monday.

Retail inflation has averaged 7.28% in the April to June quarter of 2022-23, and the RBI, in August, pared its second quarter (Q2) inflation projection to 7.1% from 7.4%. Yet, July’s print of 6.7% would mean higher price rise can be expected in the months of August and September. CARE Ratings expects inflation in Q2 to be “pretty much in line” with the RBI’s 7.1% estimate.

Even as overall food inflation moderated in July, inflation in cereals such as wheat and rice had edged up to 6.90% due to a consistent rise in their prices on account of limited supply, noted CARE Ratings chief economist Rajani Sinha.

The base effect from August 2021, when retail inflation was 5.3% compared to 5.6% a month earlier, may also lead to a slight rise in the CPI reading. Another factor that may drive up retail food prices is that August marks the first full month of GST levies on unbranded, pre-packed food items which kicked in on July 18.

“With the onset of the festive season, we believe that food inflation should pick up in August 2022 and we also see upside risks to food prices due to floods and uneven monsoon,” Hitesh Suvarna analyst at JM Financial, said in a research note, adding that mandi prices had risen over the first half of August.

While the government had imposed a ban on wheat exports in May, a shortfall in production of wheat on account of heatwave led to disruptions, and lower rice acreage due to uneven rains could keep supply conditions tight, resulting in high cereal inflation in the near term, Ms. Sinha said. Moreover, the volatility in rupee and uneven monsoon distribution continue to pose a risk to overall inflation, she emphasised.

The Essential Commodities Act was invoked on August 12 to crackdown on tur dal traders who were undertaking “restricted sales” so as to drive up the price. A fortnight later, the export of atta, maida (refined flour) and rava (wheat semolina) was banned, citing a sharp spike in their global prices and the need to ensure overall food security in the country. Last week, a 20% export duty was imposed on rice exports to calm domestic prices even as paddy sowing continues to lag due to uneven progression of monsoon in different parts of the country.

ICRA chief economist Aditi Nayar cautioned that August and September retail inflation numbers could be “slightly” higher than July’s 6.7% level due to base effects. While edible oil, vegetables, and meat and fish inflation had dropped in July, fruit, eggs and cereal had recorded substantial upticks, she pointed out.

Following July’s retail inflation data, the Finance Ministry had said that policy steps such as maintenance and calibrated releases of buffer stocks in the case of rice, pulses, and onions, and export restrictions in the case of wheat, are expected to keep a check on food inflation. “In the absence of any further shocks”, inflation pressures are expected to be capped due to moderation in global commodity prices, it had said.