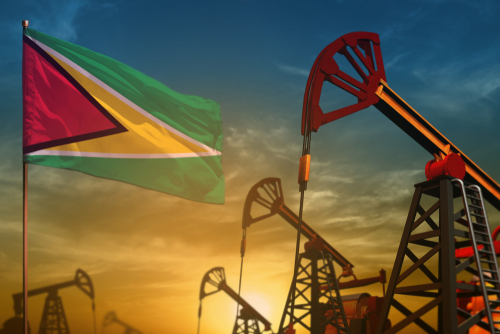 SOUTH FLORIDA – Since massive oil reserves were discovered off its shores in 2015, the small nation of Guyana on South America’s northern coast has seen its economy take off. Economic growth topped 43 percent in 2020, 23 percent in 2021 and was poised to exceed 50 percent in 2022, making Guyana likely the world’s fastest-growing economy this year, according to the International Monetary Fund.

But how can the sparsely populated nation next to Venezuela bring the greatest benefit to its people and avoid the “curse of oil” that has sparked corruption and inequality in some petrostates?

That’s among the questions to be discussed at an event Dec. 14 in South Florida, organized by several Guyanese groups in the US. The hosts aimed to engage the Guyanese diaspora to help their Caribbean homeland find the best ways to channel Guyana’s newfound oil and gas wealth for the common good. Similar events have already been held in New York City’s Queens and Brooklyn, says Terrence Blackman, a longtime academic at City University of New York. He recently founded the Guyana Business Journal & Magazine blog and webinar series, which is helping organize the event.

“What is needed is a sober, calm conversation among all Guyanese across racial lines, across class lines, and we’re trying to provide a forum for that,” says Blackman, referring to sometimes tribal politics of Guyana, where the two main parties are split mainly along racial lines between descendants of enslaved Blacks and indentured East Indians. “We want to take the conversation outside of the political cauldron.”

Blackman is especially keen on improving education in Guyana, so locals can find good jobs not only as engineers or technicians in the oil-and-gas industry but also in the many businesses that will develop from oil and gas: transportation, trade, hotels, facilities management and more.

“You have to build that capacity, because businesses require it,” says Blackman. If people in Guyana can’t fill jobs, others will be brought in, with the potential to disrupt society in the nation of some 800,000 people, he says. “And this is where I think the diaspora is important. You have at least 400,000 Guyanese overseas with expertise in various areas… And we need some clear understanding how you source that capacity first from the Guyanese diaspora and then from beyond.”

Natasha Gaskin-Peters already is working on ways to help local Guyanese companies become more competitive and cash in on the oil-and-gas boost windfall. A PhD economist, she leads the five-year-old Centre for Local Business Development in Guyana. It’s part of an initiative funded by Stabroek Block partners ExxonMobil, Hess and China’s CNOOC, to strengthen local firms to supply the oil sector and beyond.

Gaskin-Peters says the Centre is focusing on training and mentoring to bring Guyanese companies up to international standards, helping boost their internal systems, documentation, and quality controls to become certified in such programs as ISO9001 or the American Petroleum Institute’s QI. It’s assisting a broad range of local companies, mostly small and medium-sized, in industries as diverse as construction, logistics, food catering and welding, she says.

“Guyana’s key focus is diversification,” says Gaskins-Peters, who will visit Florida to speak at the Dec. 14 seminar. “Prior to oil-and-gas, we were an agriculture-dominated country, with mining playing a huge part. Now, we’re looking to expand in agribusiness, use gas onshore to produce energy and reduce the cost of electricity, increase infrastructure projects … It’s really about utilizing the oil-and-gas sector to propel agriculture, industrialization and services to diversify for sustainable development.”

Revenues for diversification are significant. Guyana’s government likely will receive more than $1 billion this year from its share of oil and gas production and $7.5 billion in 2030 alone, as output rises, forecasts Norway-based Rystad Energy consulting firm. That should propel Guyana’s economy to grow by at least 25 percent yearly on average for the next decade and “continue to be the fastest-growing economy on the globe,” says Gaskins-Peters.

Wesley Kirton, president of the Florida-based Guyana American Chamber of Commerce, says he’s helping organize Wednesday’s event, responding to concerns among some in Guyana’s diaspora that they lack up-to-date information on what’s happening in their fast-transforming homeland.

“And we want to give our diaspora an opportunity to share their ideas on how the revenues from oil-and-gas can be used for the benefit of all people of Guyana,” adds Kirton.

The Chamber leader is eager to see oil revenues channeled into agri-business, so that Guyana can not only reduce its own food import bill but also, supply food to fellow nations in the Caribbean Community (CARICOM), trimming food imports from countries outside the group.

“The importance of food security manifested itself quite clearly during the pandemic and with the invasion of Ukraine, through supply-chain issues that decreased shipments and raised prices,” Kirton says. “Greater food exports from Guyana fits with CARICOM’s objective to reduce the area’s food import bill by 25 percent by 2025.”

The Dec. 14 event, “Navigating a Changing Guyana,” is set for 4:30 to 7:30 pm at the Miramar Cultural Center, 2400 Civic Center Place in Miramar in Broward County. Speakers from Guyana and the US also feature Carl Greenidge, Guyana’s former foreign minister, plus professor and business consultant Jerry Haar, executive director for the Americas at Florida International University, among others.

To register for the free seminar and reception, call 305-968-8398 or email guyamcham@gmail.com. More than 100 people are expected to attend in person and more online.

Doreen Hemlock is a former business reporter for the Sun Sentinel covering energy, ports, and other topics. Born in New York and raised in the U.S. Virgin Islands, she worked 14 years in Peru, Venezuela and Puerto Rico for varied media. She holds an MBA from Columbia University and has been called “Gringa Latina” for her love of Latin America. Doreen has won several prestigious awards for her reporting over the years.