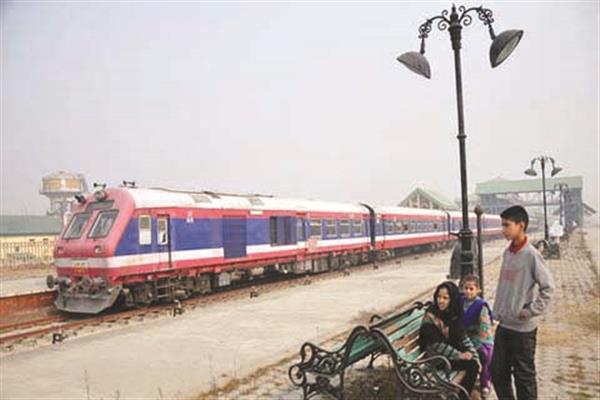 Srinagar, July 31: The authorities have decided to add four more trains from Monday to its existing network in Kashmir to cater huge rush of passengers along the 137-kilometer-long Baramulla-Banihal railway section, officials on Sunday said.

“04 new services have been introduced taking the total number to 19. It includes one early morning from Budgam towards Banihal and one in the afternoon,” he said.

Similarly, two services have been added from Banihal towards the Budgam section, one in the afternoon and one in the evening, he added.

“This has been done after taking into consideration the passenger demand, peak rush, and operational convenience,” the CAM Kashmir said.

Sakib said that Northern Railways is committed to serve the people and there will be no compromise on services.

He said the detailed timetable is available at all the stations. It has been circulated across all digital and social platforms so that people will not face any difficulty anymore.

‘We have also directed all stations to make adequate arrangements for passengers traveling from the Banihal-Baramulla sections,” Sakib said.

The 137-kilometer Banihal-Baramulla railway line comprised 17 stations. Presently there are 15 pairs of trains that chug between the Baramulla-Banihal, and Budgam-Banihal sections of the line.

In 2013, Kashmir got its first train service when it was inaugurated by then Prime Minister Manmohan Singh.

Over the past four years, railways in Kashmir have suffered huge economic losses owing to the Covid19 crisis and the August 2019 situation in the Valley.

The USBRL railway track is being laid to connect Kashmir with the rest of the country. It comes under the jurisdiction of the Firozpur Railway division of Indian Railways’ Northern zone.

The 359 m (1,178 ft) tall Chenab Bridge lies on this line, which once completed will be the tallest railway bridge in the world.