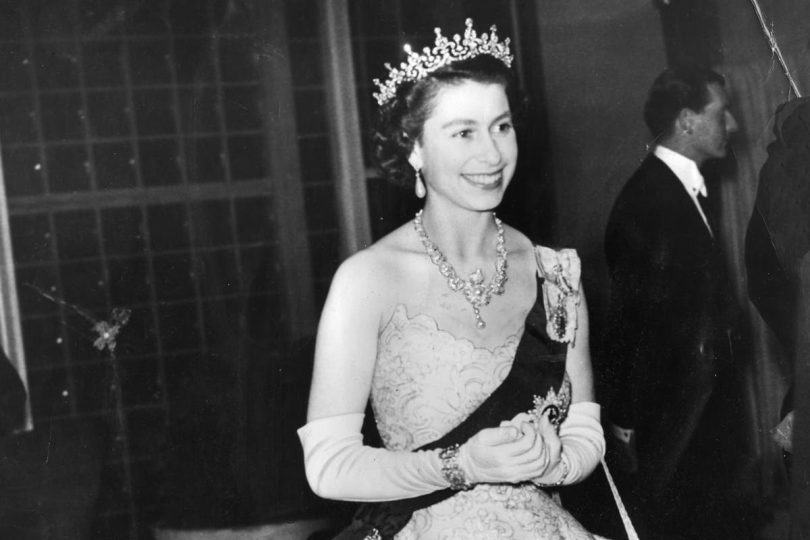 When most people die, their loved ones have to begin the painful process of sorting through their things. It’s a grim process, but it has to be done, and everything from odd socks to old CDs must be dealt with.

For the family of Her Majesty The Queen though, this process involves significantly less old CDs and substantially more jewels, tiaras and precious gems.

The Queen was buried in a private ceremony following her state funeral on Monday, 19 September, and while her reign and royal presence was marked with fantastic displays of jewellery, the monarch is unlikely to have been buried in full regalia — leaving much of her jewellery to be passed on to her next of kin. But who gets what, and why?

Firstly, it is important to remember that the crown jewels do not technically belong to the Queen: “​​They are handed from monarch to monarch in trust for the nation,” royal expert Katie Nicholl told Entertainment Tonight.

“So, technically, they belong to the monarch, but the monarch isn’t allowed to run off with the crown jewels. They stay safeguarded at the Tower of London in safekeeping for the nation, and when one monarch dies, the crown jewels are immediately passed to their heir.”

So the Queen’s former crown, sceptre and orb now belong to her son, King Charles III.

In fact, royal commentators and jewellery experts suspect the Queen is likely to have been buried in very minimal jewellery.

Jewellery expert Josie Goodbody, who has been studying jewellery for over 20 years, believes the Queen has been buried with just two significant pieces. “Her wedding band, which is made from Welsh gold, is just such a personal item. I believe she would definitely be wearing that in the coffin,” she told the Evening Standard.

“And if she was wearing a pair of earrings it would be a pair of pearl earrings, as that’s what she always wore. In mourning, the Royals don’t wear colour, so pearls are pure, white, and unflashy. This comes from Queen Victoria, who, as we know, didn’t want to wear any colour after the death of her husband Prince Albert.”

The Queen’s engagement ring also happens to be a colourless stone — a large diamond flanked by eight smaller diamonds, set in a platinum band — but Goodbody thinks it is unlikely she will be buried with this.

“Personally, I think that will likely go to her daughter, Princess Anne. Lots of people give engagement rings to their daughters, or their sons to propose with,” she says.

But, of course, all the Queen’s sons have all already married. For that reason, Goodbody expects the Princess Royal will receive the important gem.

There is also a ranking process in what will happen to the rest of the jewellery. As royal commentator Katie Nicholl described: “There is a hierarchy in all of this. The Queen Consort, really, gets the first choice of the queen’s jewellery.

“And after that is Princess of Wales, of course, Kate [Middleton]. The Duchess of Sussex, I’m sure, will come in for some jewellery at some point, but she is much further down the pecking order.”

Goodbody agrees, but notes this hierarchy may have already been established, with the jewellery bestowed upon its new owners before the Queen’s death. “The Queen has already passed certain tiaras onto Camilla and Kate. The Cambridge Lover’s Knot Tiara, for example, was lent to Diana for her life, then went back to the Queen when she died, but is now worn by Kate.”

As well as the gifts already received by the Queen, Goodbody expects that members of the Royal Family will wear items of her personal jewellery collection “on loan” for certain occasions.

“If there’s a special occasion when [the women of the Royal Family] want to go for a certain era of jewellery, for example, perhaps they would approach the Queen’s jeweller or whoever protects the collection and wear a piece just for the night.”