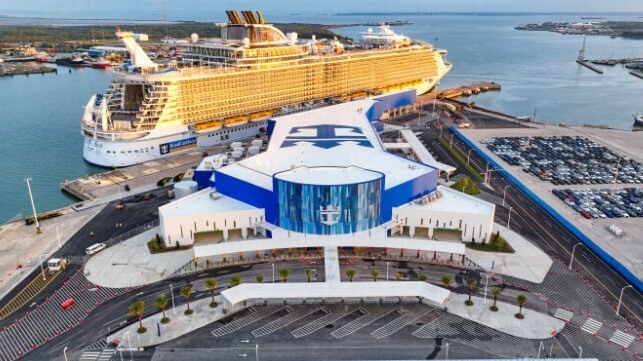 The Port of Galveston, Texas is rapidly growing as a cruise homeport in the United States. As more passengers seek close to home embarkation opportunities, Galveston has emerged due to its strategic location attracting more cruise lines and ships and planning further expansion.

Galveston entered the modern cruise industry 22 years ago mostly as a seasonal port but more recently has emerged as a year-round homeport for cruise lines including Carnival Cruise Line and Royal Caribbean International. In addition to being a busy cargo port, moving more than four million tons of cargo a year, including roll-on/roll-off, dry bulk, export grain, refrigerated fruit, liquid bulk, general and project cargoes, Galveston looks to expand its role in the cruise industry.

Just before Christmas on December 22, Galveston celebrated its millionth cruise passenger of the year as the Wade family boarded Royal Caribbean International’s Adventure of the Seas for a 4-day Mexico cruise. The passenger market again reached Galveston’s pre-pandemic 2019 level, but the port expects to break its 2022 passenger record next year. A total of 362 cruises are scheduled to depart Galveston in 2023 as major lines continue to expand their presence in Texas.

The 113,561-ton Ruby Princess, which accommodates 3,080 passengers, departed on Princess Cruises’ first trip from the port in six years on December 18. The cruise ship will make 16 sailings carrying upwards of 50,000 passengers from Galveston during the 2022-2023 winter season. Starting in late 2023, Princess has scheduled the larger Regal Princess, 142,200 gross tons and accommodating 3,560 passengers, to cruise from Galveston.

Other major lines are also planning to send their new cruise ships to Galveston. Norwegian Cruise Line had the new 143,500 gross ton Norwegian Prima make a brief stop in Galveston this fall and starting in late 2023 the cruise ship will be homeported in Galveston. Carnival Cruise Line’s third LNG-fueled cruise ship, Carnival Jubilee, is due to make its maiden voyage from Galveston in December 2023. MSC Cruises is also expected to announce plans for Galveston in the near future.

Currently, Galveston is the fourth largest homeport for cruises in the United States second only to Florida. In November, they celebrated the opening of Galveston’s third cruise terminal located at Pier 10 developed with Royal Caribbean Group in partnership with the terminal operator and stevedoring company Ceres. The port contributed $22 million to the $125 million project for pier repairs, site work, utilities, and port-operated cruise parking. The 161,334-square-foot terminal was built to handle the largest cruise ships in the world and started operations with the Allure of the Seas (225,200 gross tons). With the introduction of the Oasis Class cruise ship sailing seasonally from the port, Galveston estimates the new terminal will handle as many as 630,000 passengers each year.

During 2023, Cruise Terminal 25 will also be undergoing renovations to handle the increased passenger counts associated with the Carnival Jubilee’s arrival in 2023. These renovations will include two new passenger boarding bridges with enhanced boarding areas and expansion of check-in areas and screening, as well as an updated and expanded U.S. Customs and Border Patrol area.

Looking to support its future growth, the port authority also recently confirmed that it is negotiating with MSC for the development of a fourth cruise terminal at the Port of Galveston. They signed a non-binding memorandum of understanding on December 7 outlining the parameters of a potential agreement for the development and operation of a terminal at piers 16-18. The fourth cruise terminal is included in the port’s 20-Year Strategic Master Plan.