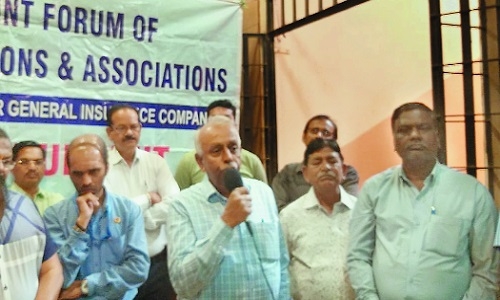 As per call given by Joint Forum of Trade Unions and Associations (JFTU) of employees and officers in Public Sector General Insurance (PSGI) companies, the employees all over India demonstrated against arbitrary and unilateral imposition of Key Performance Indicator (KPI) and restructuring. The employees also demanded merger of all the four PSGI companies, uniform 30 per cent family pension and 14 per cent contribution of management in National Pension System (NPS).

Chandrakant Deshpande, Deepak Gotmare, Vivek B, Homraj Ade, Rajendra Saroj Prakash Kanade, Sunil Tambe and have taken efforts for the success of the demonstrations. PSGI employees decided to go on one day strike on January 4, 2023 on the unilateral implementation of KPI and restructuring. Chief Labour Commissioner of India, CLC, called JFTU, DFS and management of all four PSGI companies for conciliation on January 2, 2023 at New Delhi.