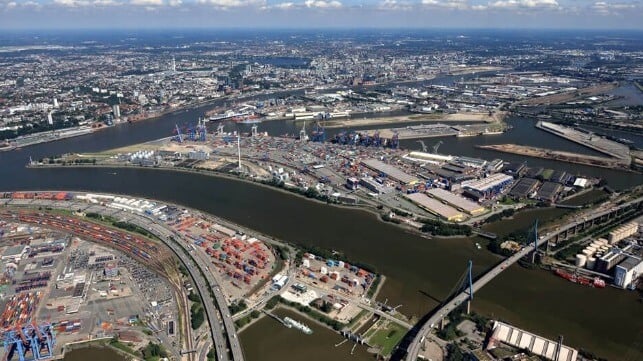 Efforts are continuing to build partnerships with European ports to develop the supply of hydrogen for future fuels. In Germany, Hamburg announced plans for the country’s first large-scale green energy import facility linked with the existing facilities in the port, while in France the Nantes – Saint Nazaire Port is part of a project designed to support large-scale green hydrogen production facilities to provide fuel for the energy transition in the Loire Valley.

The project in Hamburg will see Air Products working with Mabanaft, through its subsidiary Oiltanking Deutschland, which currently operates the large tank farm in Hamburg, for the development of Germany’s first large-scale, green energy import terminal. The planned terminal is to be located at Mabanaft’s existing tank terminal which would provide strategic access to green ammonia from large-scale green hydrogen production facilities operated by Air Products and its partners around the world.

Under the proposal, they plan to import ammonia that would be converted to green hydrogen at Air Products’ facilities in Hamburg. It would then be available for distribution to buyers locally and across northern Germany. The goal is to launch the operation by 2026 and it joins others in Germany such as the new terminal at Wilhelmshaven being developed for LNG that is also exploring ammonia imports.

Germany’s Federal Minister for Economic Affairs and Climate Action Robert Habeck said, “Now more than ever, we need to advance the hydrogen economy. To do this, we are setting up our own hydrogen production in Germany, but of course, we also need hydrogen from imports. An accelerated energy transition with more speed in expanding renewable energies and ramping up green hydrogen are the right answers to the Russian aggression and the right answers to strengthen energy security, resilience, and competitiveness.”

Similarly in France, they are also exploring efforts to develop an offshore hydrogen production supply chain. The Nantes ? Saint Nazaire Port, which is France’s fourth largest seaport will work with Lhyfe, a French company developing renewable and green hydrogen sources to develop the hydrogen supply chain. Lhyfe operates a renewable hydrogen production facility employing water electrolysis, and in September launched its Sealhyfe project in Saint Nazaire which is the world’s first offshore renewable hydrogen production platform. The prototype, which will be connected to a floating wind turbine, will have a capacity of 1 MW. Lhyfe is planning to set up similar onshore facilities throughout Europe.

Working with the port, the companies will collaborate to identify port areas and facilities capable of accommodating R&D prototypes, as well as the industrial requirements for the construction of equipment and supporting infrastructure needed for large-scale offshore hydrogen production.

The companies will also study how best to bring the renewable gas ashore and integrate it into the land-based network.

Other European ports, including in the Netherlands and Belgium are also looking to build hydrogen power supply operations. They are each looking at import opportunities both to supply domestic users as well as the develop bunkering operations to provide alternative fuels to the maritime industry.