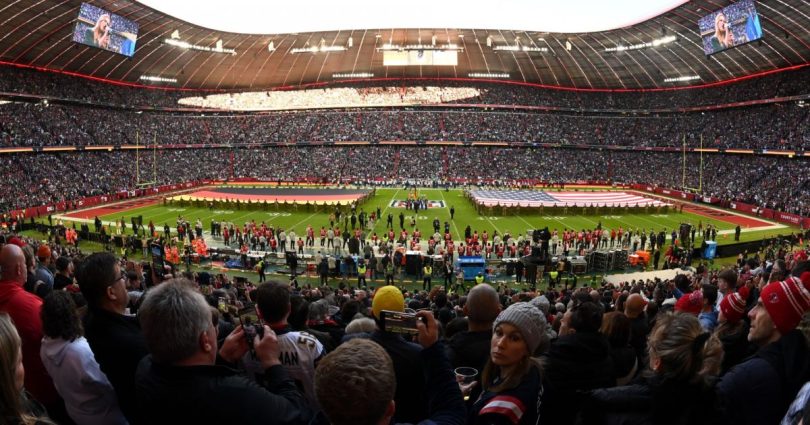 The NFL’s first game in Germany was seemingly a smash hit, and the 69,811 fans on hand at Munich’s Allianz Arena are to thank for that.

The crowd provided the Seahawks and Buccaneers alike great energy throughout the contest, consistently cheering on big plays and touchdowns during Tampa Bay’s 21-16 victory.

Their engagement was noticed by the players, as Chris Godwin pointed out after the game came to an end.

“Nobody’s left yet. It’s amazing. It’s really, really amazing,” Godwin said of the crowd on NFL Network. “You can tell how enthused they were to have American football here, and they really showed out.

I’m grateful to be a part of this first game. It’s beautiful.

MORE: Highlights, updates as Buccaneers hold off Seahawks in Germany

The best moment from the crowd came as the contest neared its conclusion. At around the two-minute warning, the fans on hand broke out into a rendition of one of John Denver’s most famous songs: “Take Me Home, Country Roads.” It rang throughout the arena and was easy to hear in the background of the game broadcast.

And yes, that Bavarian classic, “Country Roads,” sung with passion by the Munich crowd. pic.twitter.com/2c00o4bFVH

“Country Roads” may be best associated with the state of West Virginia, but it has an international appeal. Notably, it is a popular sing-along song at Oktoberfest events in Munich, so it shouldn’t be a big surprise that the German fans broke that one out to honor the arrival of an American sport.

Still, NFL fans, media personalities and other professional athletes were delighted with the crowd’s enthusiastic rendition of the song. Even West Virginia, which has adopted the tune as a part of its athletic tradition, weighed in on it.

Here are some of the best reactions to the performance along with a few other great moments from the crowd in Germany.

Just watch the entire stadium at Allianz Arena singing to John Denver’s “Take Me Home, Country Roads” (very popular with the Oktoberfest crowd, I have learned) in the final two minutes pic.twitter.com/PwMUG2Z08n

Did not have Country Roads on my NFL Germany bingo card

Country Roads in Germany. Just brings everyone together. #LetsGo

Needless to say that the atmosphere in Munich was terrific. That will make it easy for the NFL to justify returning to Germany in future seasons.

The energy in Germany right now is unbelievable. 🙌 @NFLDeutschland