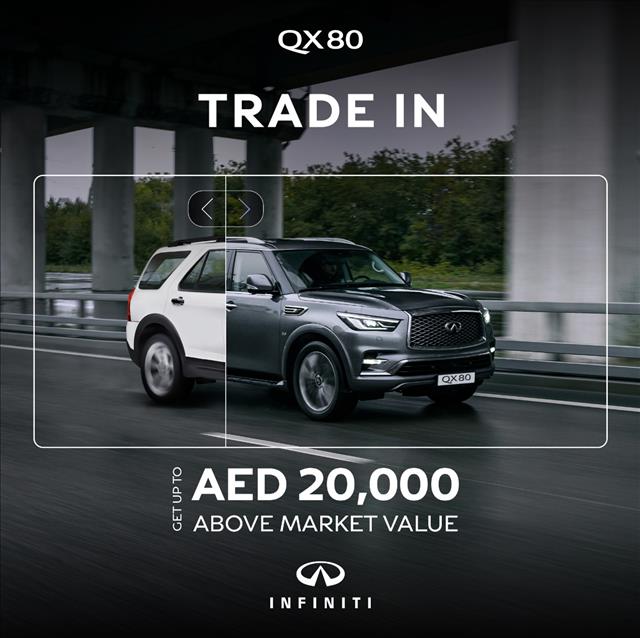 A trade-in offer for a brand-new INFINITI QX80

Dubai: Arabian Automobiles, the flagship company of the AW Rostamani Group and the exclusive dealer for INFINITI in Dubai, Sharjah and the Northern Emirates, is rolling out an offer befitting the INFINITI QX80 – the brand’s luxury SUV. Discerning drivers looking to elevate their experience can take advantage of trading in your car, any make or model, for a new INFINITI QX80, while taking advantage of the benefits that include up to AED 20,000 above market value and 5 years of unlimited mileage warranty.

The QX80 is the most commanding of the INFINITI line-up, with its intricately formed, double-arch grille inspired by traditional origami craft and chassis angles accentuating the car’s sleekly defined curves enhanced by its deluxe chrome detailing.

The QX80 delivers the freedom to take on any road endeavour, with ample flexible cargo space as a standard and the second and third rows being easily foldable for whatever circumstances. Adding on to the experience, Apple CarPlay® and Android Auto® display your smartphone functions crisply on the 12.3-inch touchscreen with its new intuitive infotainment system, while your device conveniently charges on the wireless mat.

A powerful V8, generating 400 horses and high ground clearance is just what you need to scale those mighty dunes, and with 8500 pounds of towing capacity those dune buggies are an easy keep. This beauty of luxury is manufactured in Japan, the land of the rising sun, and comes in a number of options for the broadest of executive options. Experience vehicular imperiality like never before behind the wheel of a marvel of engineering.

To book a test drive and take advantage of this offer, drivers should visit their nearest INFINITI centre in Dubai, Sharjah and the Northern Emirates or infiniti-dubai.com.

Arabian Automobiles Company (AAC) is the flagship company of AW Rostamani Group. With over 50+ years in the business, AAC is one of the leading automotive dealers in the GCC and exclusive distributor for Nissan, INFINITI and Renault vehicles in Dubai and the Northern Emirates. Arabian Automobiles is looking back on 50+ years of excellence and passion, and forging ahead with its vision to enrich customer lives and remain the trusted automotive brand of choice.

Arabian Automobiles became the first automotive company in the UAE to be awarded the prestigious ‘Dubai Quality Gold Award’ by Dubai Economy in May 2017. In the same year, INFINITI won ‘Best Performing Brand’ in the automotive category of the Dubai Service Excellence Scheme; an accolade previously won by Nissan in 2016 and Renault in 2015. In 2015, Arabian Automobiles received the Mohammed Bin Rashid Al Maktoum business award for most outstanding performance and in 2013 it became the first private company in the UAE to be inducted into the prestigious Palladium Balanced Scorecard Hall of Fame for strategy execution. Arabian Automobiles Company is currently the holder of Nissan Motor Company’s ‘Global Nissan Aftersales Award and is the only Nissan distributor to have won the award for a total of 21 times with 10 consecutive wins between 2007 and 2016.

Across its Dubai and Northern Emirates network, Arabian Automobiles operates: