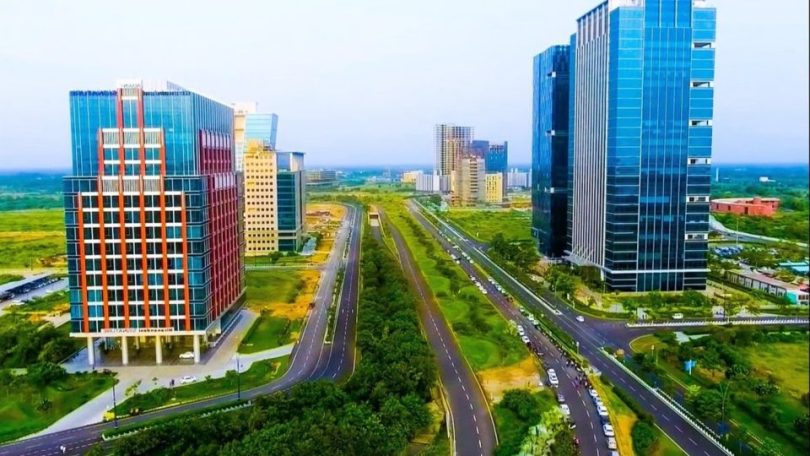 It’s a world-class finance and IT zone with tax benefits for enterprises; but prohibition rules, lack of nightlife, and other social factors work against it

GIFT City claims to be a new “Financial & Technology Gateway of India for the World”. Photo: GIFT City website

The idea is to make it a global financial hub on a par with Singapore, London, Tokyo, Shanghai, Paris and Dubai.

He also laid the foundation stone of IFSCA Tower, the headquarters Building of IFSCA, at GIFT City.

“Conceptualised as an iconic structure, reflective of the growing prominence and stature of GIFT-IFSC as a leading international financial centre, the “IFSCA Tower” is planned to have a built-up area of 3,00,000 square feet spread across 27 floors with best-in-class modern amenities and a magnificent panoramic view,” IFSC said.

“The IFSCA Tower has been designed to be a platinum-rated green building with a highly efficient and sustainable structure. Estimated to be constructed at an estimated cost of ₹200 crore, when completed in 2024, the IFSCA Tower will emerge as a monumental edifice in GIFT City and symbolise the dreams and aspirations of a New and Aatma Nirbhar Bharat,” it added.

According to the PM, “The vision for GIFT City is to create a world-class finance and IT zone for India to provide services not only to India but to the entire world.”

What is GIFT City?

GIFT City is a planned business district in Gujarat. It is located on the banks of river Sabarmati connecting Ahmedabad and Gandhinagar. The City is planned on 886 acres of land with 62 mn sq. ft. of built-up area which includes office spaces, residential apartments, schools, hospitals, hotels, clubs, retail and various recreational facilities.

It has a “Walk to Work” concept and consists of a conducive Multi-Service SEZ (Special Economic Zone) and an exclusive Domestic Area. GIFT City claims to be a new “Financial & Technology Gateway of India for the World”.

According to the City’s website, “GIFT City is an emerging global financial and IT services hub, a first of its kind in India, designed to be at or above par with globally benchmarked business districts. It is supported by state-of-the-art infrastructure encompassing all basic urban infrastructure elements along with excellent external connectivity. Companies from Financial Services, Technology and all other services sector will be targeted as potential occupants within the city.”

“GIFT City is changing the economic face of Gujarat and would keep India on the global map as Centre of excellence in the Financial & IT/ITeS Services domain,” it said.

GIFT City is equipped with some of the latest technology. From the latest public transport to automated waste collection to an efficient district cooling system, it has the best amenities available for its residents, claims the City’s management.

What is being done to be the best

Several initiates have been announced by GIFT City to make it a global financial hub on a par with Singapore, London, Tokyo, Shanghai, Paris and Dubai.

An Indian Regional Office (IRO) will be set up by New Development Bank (NDB). IRO will be the face of NDB in the Indian sub-continent. It will progressively undertake a growing range of the NDB’s work, beginning with the identification and preparation of projects in India and other member countries. It will closely work with the government, public and private sector agencies in Indian sub-continent to identify projects with strong development impact. The NDB has approved 20 projects in India totalling approximately $7.2 billion.

“The presence of these leading international banks not only symbolises the growing stature of the City as an international financial centre but also brings the wealth of global financial products, services and expertise to the Indian shores,” the City said.

Expansion of capacity of the Global In-house Centre (GIC) of Bank of America (BoA), the first global bank to establish GIC at GIFT-IFSC, has also been announced. BoA has decided to further expand its operations in GIFT by hiring 1,500 new employees, in addition to its present workforce of approximately 1,000 in GIFT.

The International Sustainability Platform (ISX) was launched to mobilise capital flows for corporates, governments and institutions in India and other parts of the world to achieve their environmental and social goals. The platform will act as a single destination for all sustainability products.

The Gujarat government has announced tax incentives for units in IFSC and also for SEZ units (non-IFSC).

For SEZ units, duty-free import/domestic procurement of goods for development, operation and maintenance of the units, exemption from customs duty for all goods imported in the SEZ used for authorised operations, no GST on services received by unit in SEZ/IFSC and provided by SEZ/IFSC units to offshore clients, single window clearance for Central and State level approvals, and other benefits.

In the City, non-resident Indians (NRIs) and foreign investors get the advantage of low tax rates on investments made in IFSC.

The MoUs will promote greater collaboration and partnerships between IFSCA and these regulatory authorities through, among other things, the exchange of information, sharing of best practices and capacity building.

IFSCA has also exchanged an MoU with the Department of Space (DoS), Government of India, to unlock the enormous opportunity of convergence between FinTech and SpaceTech.

Despite this, there are reports that GIFT City has been slow to attract investments, since it was conceptualised in 2007 by then Gujarat Chief Minister Modi. It was only after Modi become PM in 2014 that investments started to flow to GIFT City.

Earlier this year, Singapore High Commissioner Simon Wong said it is “hard” for Singaporeans to live in GIFT City as it is “quite a ghost town” after working hours. He also said the “bylaws are very tough” and “it is difficult to build a financial centre”, according to an Indian Express report.

“It takes decades to come up where we are. Some feel GIFT City’s development has been slow. However, in reality, you have to build the hardware and software to attract people to come organically. You cannot force people to come. If no profit is made, nobody will come,” he was quoted as saying in the report.

According to experts, some of the reasons why national and foreign fintech companies may not turn to GIFT City are prohibition rules, lack of nightlife, and other social factors.

A media report last year stated that the Gujarat government was planning to relax liquor rules in GIFT City for “evening social life”.

“Inside SEZs, the current notification allows liquor permits only to residents. This is not in line with the dispensation in other centres in India or abroad. To create evening social life, which is at least as good as in other centres, liquor bars with wine-and-dine facilities are required in the SEZ area,” a senior bureaucrat was quoted as saying by Times of India in December 2021.

The GIFT management had written to the superintendent of prohibition and excise seeking relaxation in liquor laws in 2020, the report added.