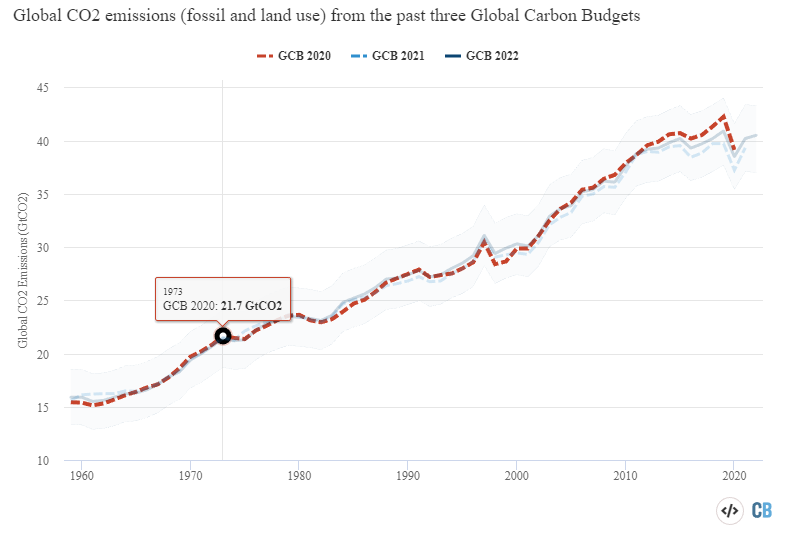 Total global CO2 emissions – including land use and fossil CO2 – increased by approximately 0.8% in 2022, driven by a combination of steady land-use emissions between 2021 and 2022 and increasing fossil CO2 emissions. However, total CO2 emissions remain below their highs set in 2019 and have been relatively flat since 2015.

The 17th edition of the Global Carbon Budget, which is published today, also reveals:

The Global Carbon Project estimates that global emissions of CO2 – including land use and fossil CO2 – will remain relatively high at 40.5GtCO2 in 2022, but still below their 2019 peak of 40.9GtCO2.

The authors note that these emissions “are approximately constant since 2015” due to a modest decline in land-use emissions balancing out modest increases in fossil CO2.

The 2022 report includes small revisions to emissions estimates from previous years. The new figures suggest that emissions in recent years have been a little higher than those reported in the 2021 budget. The largest changes are in land-use emissions, which account for approximately three quarters of the upward revision in the 2022 budget over the past decade.

The figure below shows 2022 (solid blue line), 2021(dashed blue) and 2020 (dashed red) global CO2 emissions estimates from the Global Carbon Project, along with the uncertainty (shaded area) of the new 2022 budget. The new 2022 budget lies roughly halfway between the old 2020 budget (which showed continued growth in emissions) and the 2021 budget (which showed flat emissions).

While the apparent flattening of emissions in the 2022 budget is better than a world of increasing emissions, this good news comes with a few important caveats.

First, to meet global climate targets of limiting warming to well-below 2C, emissions do not just need to stabilise. They need to decline rapidly, reaching net-zero emissions in the latter half of the 21st century. As long as emissions remain significantly above zero, the world will continue to warm.

Second, the uncertainties surrounding land-use emissions remain quite high. Therefore, it is hard to rule out a scenario where these emissions have actually continued to increase over the past decade. Further research and data collection is needed to provide a better picture of trends in global land-use emissions in recent years.

Global emissions from land-use are expected to be approximately 3.9GtCO2 in 2022. This is a slight decline from 2021 emissions, but the large uncertainty in the estimate makes it difficult to be confident in year-to-year changes.

Three countries – Indonesia, Brazil and the Democratic Republic of the Congo – are responsible for approximately 60% of global land-use emissions. Land-use change emissions over time from those three countries (along with their estimated uncertainties) are shown in the figure below.

The apparent decline in the net land-use emissions is likely driven by growing removals from reforestation, the report says.

Modest increase in fossil emissions despite declines in China

This represents a continued recovery in global emissions from the declines during the Covid-19 pandemic in 2020, as well as a failure of hopes that a “green recovery” could start taking emissions on a downward trend.

However, despite continued increases in fossil CO2 emissions, the rate of growth has slowed noticeably over the past decade.

The Global Carbon Project points out that “the latest data confirm that the rate of increase in fossil CO2 emissions has slowed, from +3% per year during the 2000s to about +0.5% per year in the past decade”.

The figure below shows global CO2 emissions from fossil fuels, divided into emissions from China (red shading), India (yellow), the US (bright blue), EU (dark blue) and the remainder of the world (grey).

The European Union (EU) is likely to see a 0.8% decline in emissions in 2022, driven by lower gas use associated with Russia’s attack on Ukraine and the resulting global energy market disruption.

EU demand for gas may be down by as much as 10% this year, while emissions from coal are expected to increase by close to 7% as it substitutes for high-cost gas.

In China, emissions declined by around 0.9% in 2022, primarily driven by continued lockdowns associated with Covid-19 that slowed both industrial activity and economic growth.

Chinese emissions show declines in emissions from oil (-2.8%), gas (-1.1%) and cement production (-7%), only showing a slight increase in emissions from coal (+0.1%). The Global Carbon Project notes that cement, in particular, played a large role in declining Chinese emissions due to a slowdown in the property market. (See Carbon Brief’s recent detailed analysis by Lauri Myllyvirta of China’s Q3 2022 emissions.)

Indian emissions are projected to increase by 6% in 2022, mostly due to a large (+5%) increase in coal emissions as well as higher (+10%) oil use as the transport sector recovers from pandemic declines.

The chart below shows total emissions for each year between 2019 and 2022, as well as the contributions from major emitters and the rest of the world countries. Annual emissions for 2019, 2020, 2021 and the estimates for 2022 are shown by the black bars. The coloured bars show the change in emissions between each set of years, broken down by country. Negative values show reductions in emissions, while positive values reflect emission increases.

Percent change in CO2 between 2019 and 2020, 2021 and 2022 for the world as a whole and for major emitting countries/regions. Note that global emissions are inclusive of the cement carbonation sink, but national inventories are not. Data from the Global Carbon Project; chart by Carbon Brief using Highcharts.

The Global Carbon Project also notes that emissions declined over the past decade (2012-21) in 24 nations despite continued domestic economic growth, bringing hope in long-term decoupling of CO2 emissions and the economy.

These 24 countries represent around a quarter of global CO2 emissions. Fifteen of these countries also had significant declines in consumption-based emissions, which account for emissions embodied in the import and export of goods.

Coal is responsible for more emissions than any other fossil fuel, representing approximately 40% of global fossil CO2 emissions in 2022. Oil is the second largest contributor at 32% of fossil CO2, while gas and cement production round out the pack at 21% and 4%, respectively.

These percentages reflect both the amount of each fossil fuel consumed globally, but also differences in CO2 intensities. Coal results in the most CO2 emitted per unit of heat or energy produced, followed by oil and gas.

The figure below shows global CO2 emissions from different fuels over time. While coal emissions (grey shading) increased rapidly in the mid-2000s to support the unprecedented growth of the Chinese economy, it has largely plateaued since 2013. However, coal use increased significantly in 2021 and modestly in 2022, causing 2022 to slightly edge out 2014 and set a new record of 15.1GtCO2.

Global coal emissions are projected to rise by around 1% in 2022, relative to 2021 levels, driven primarily by increases in India, the EU and the rest of the world, despite continued declines in coal use in the US.

Oil emissions are projected to rise by around 2.2% in 2022, compared to 2021. This has been caused by continued recovery of the transport sector from pandemic-related disruptions, though it will remain below 2019 levels.

Gas emissions are expected to decline slightly by around 0.2%, driven primarily by large declines in gas use in the EU associated with high energy costs due to the war in Ukraine.

Cement emissions are projected to decrease by around 1.6%, caused largely by declines in Chinese cement production for construction.

Every year, the Global Carbon Project provides an estimate of the “global carbon budget”.

This budget is based on estimates of the release of CO2 through human activity and its uptake by the oceans and land, with the remainder adding to atmospheric concentrations of this greenhouse gas.

(This differs from the commonly used term “remaining carbon budget”, referring to the amount of CO2 that can still be released in the future while keeping warming below global limits of 1.5 or 2C.)

The most recent budget, including estimated values for 2022, is shown in the figure below. Values above zero represent anthropogenic sources of CO2 – from fossil fuels and cement (grey shading) and land use (yellow) – while values below zero represent the growth in atmospheric CO2 (bright blue) and the ocean (dark blue) and land (green) “carbon sinks” that remove CO2 from the atmosphere.

In short, any CO2 emissions that are not absorbed by the oceans or land vegetation will accumulate in the atmosphere. While observations of both emissions and carbon sinks have improved over time, the budget does not fully balance every year due to remaining uncertainties, particularly in sinks. On average, the budget imbalance is close to zero, but some individual years may have more emissions than sinks or vice versa.

The atmospheric CO2 concentration increased 2.5 parts per million (ppm) in 2021 and is projected to increase by around 2.5ppm in 2022, resulting in global atmospheric concentrations of 417.2ppm on average for the year.

This represents an increase in atmospheric CO2 of around 51%, relative to pre-industrial levels.

However, these sinks cannot expand forever; effects of climate change – and the acidification of the surface oceans – are projected to weaken these sinks over time.

If emissions continue to increase, the portion of global emissions remaining in the atmosphere – that is, the airborne fraction – will grow, making the amount of climate change the world experiences worse than it otherwise would be.

Climate change poses an urgent threat demanding decisive action. Communities around the world are already experiencing increased climate impacts, from droughts to floods to rising seas. The World Economic Forum’s Global Risks Report continues to rank these environmental threats at the top of the list.

To limit global temperature rise to well below 2°C and as close as possible to 1.5°C above pre-industrial levels, it is essential that businesses, policy-makers, and civil society advance comprehensive near- and long-term climate actions in line with the goals of the Paris Agreement on climate change.

The World Economic Forum’s Climate Initiative supports the scaling and acceleration of global climate action through public and private-sector collaboration. The Initiative works across several workstreams to develop and implement inclusive and ambitious solutions.

This includes the Alliance of CEO Climate Leaders, a global network of business leaders from various industries developing cost-effective solutions to transitioning to a low-carbon, climate-resilient economy. CEOs use their position and influence with policy-makers and corporate partners to accelerate the transition and realize the economic benefits of delivering a safer climate.