Global oil and gas exploration is set to falter this year as the number of licensed blocks and total acreage fall to near all-time lows as the sector struggles to shake off the effects of the Covid-19 pandemic and the ensuing oil market crash, Rystad Energy research shows. Only 21 lease rounds were completed globally through August this year, half of the 42 rounds held in the first eight months of 2021. The acreage awarded so far this year has shrunk to a 20-year low of 320,000 square kilometers. Global lease rounds are expected to total 44 this year, 14 less than in 2021 and the lowest level since 2000.

Global spending on exploration has been falling in recent years as oil and gas companies seek to limit risk by focusing on core producing assets and regions with guaranteed output, aiming to streamline their operations and build a more resilient business amid market uncertainty and the threat of a recession.
The political landscape is also contributing to the decrease in license awards, with many governments pausing or halting leases and encouraging companies to wrap up exploration activity within already awarded blocks. This trend is likely to continue as governments are less eager to invest in fossil fuel production and instead look ahead to a net zero future.

“Global exploration activity has been on a downward trend in recent years, even before the Covid-19 pandemic and oil market crash, and that looks set to continue this year and beyond. It is clear that oil and gas companies are unwilling to take on the increased risk associated with new exploration or exploration in environmentally or politically sensitive areas.”
Aatisha Mahajan, vice president of analysis, Rystad Energy

The onshore exploration sector is a significant contributor to the decline in awarded acreage. Total onshore acreage awarded in leasing activity has plummeted from more than 560,000 square kilometers in 2019 to a mere 115,000 square kilometers so far this year. Offshore leased acreage also hit a high point in 2019 before dropping off a cliff in 2020 and has remained relatively flat in the past two years. 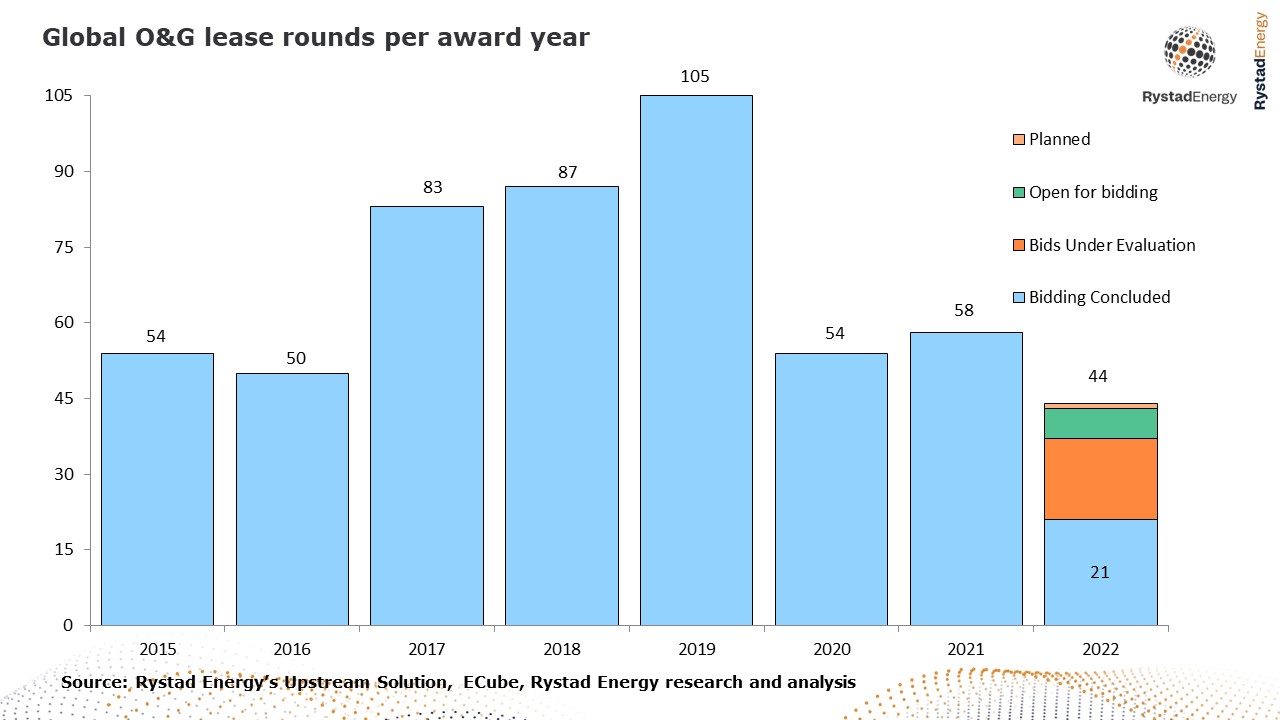 Asian licensing has bucked the trend with increased activity and blocks awarded in Malaysia, Indonesia, India and Pakistan. The global decline in licensing rounds has directly affected the awarded acreage, which has hit an all-time low for the January to August period of about 320,000 square kilometers. 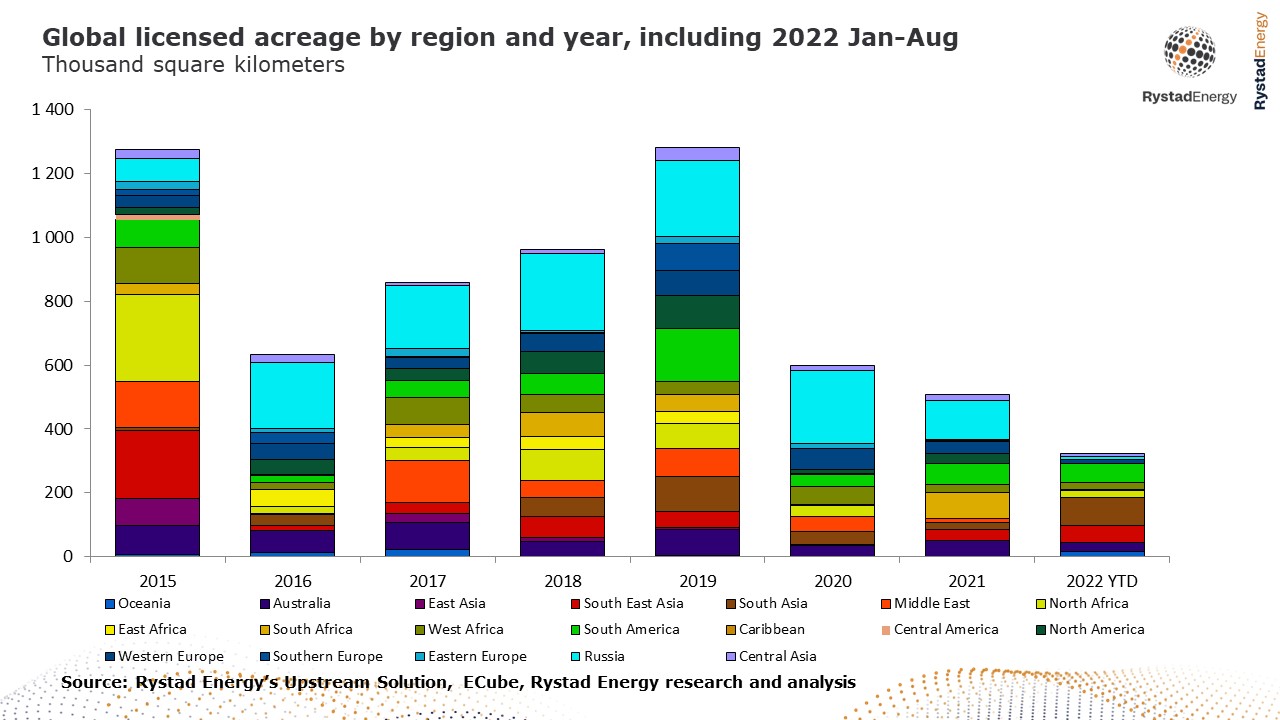 The decline in leasing activity has resulted in a considerable drop in Russian acreage awards, falling 90% from a year ago to 9,000 square kilometers, while licensed acreage in Africa shrank 70% to just 46,000 square kilometers spread across Angola, Egypt, Morocco and Zimbabwe, the only African countries to award new exploration acreage to date in 2022. On the other hand, new acreage awarded in Asia between January and August nearly quadrupled from the same period last year, while South American awarded acreage surged by 140%. 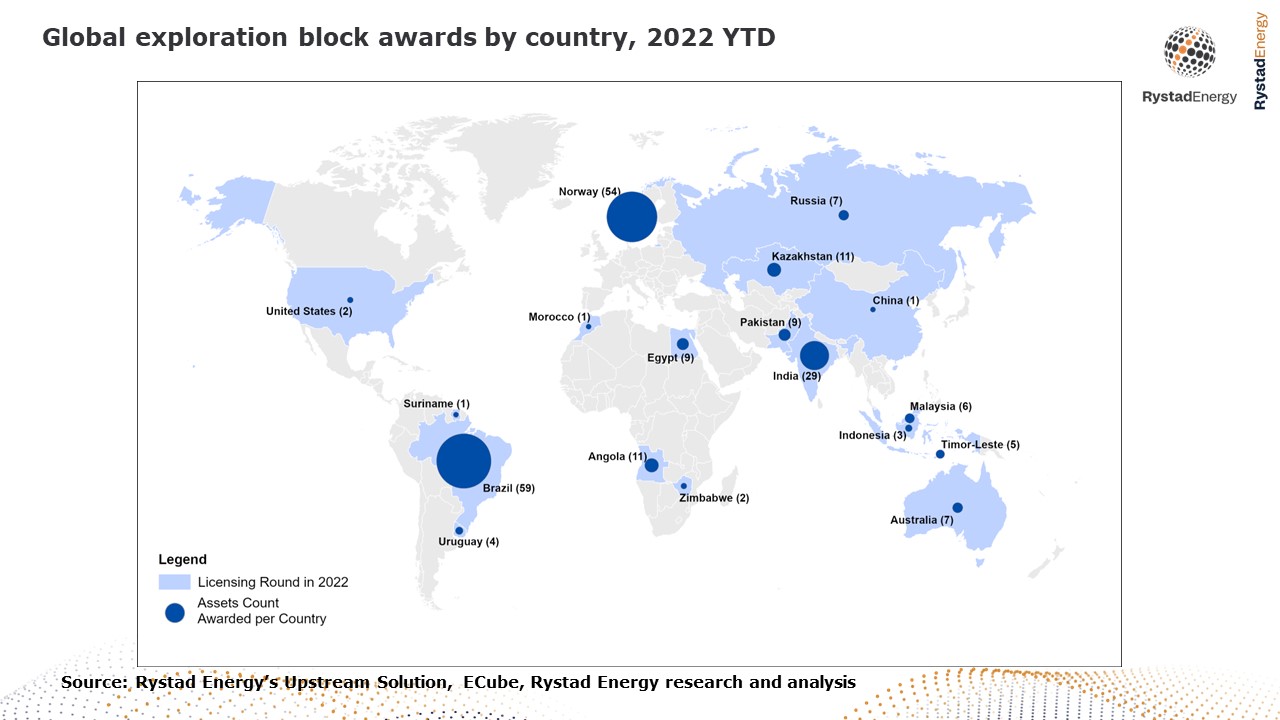 Other sizeable block awards after Brazil were Norway with 54 new licenses in its APA 2021 round, India with 29 blocks its OLAP Rounds 6 & 7, and Kazakhstan’s fourth oil and gas auction round, in which 11 blocks were awarded. There was also some sporadic activity in Africa between January and August, with Egypt providing rights to explore in nine blocks and Angola granting two blocks. South America also saw an offshore licensing round in Uruguay, where three exploration blocks were awarded – blocks OFF-2 and OFF-7 to Shell and Block OFF-6 to US independent APA. Challenger Energy signed a 30-year license for OFF-1 through direct negotiation with the government.
Source: Rystad Energy