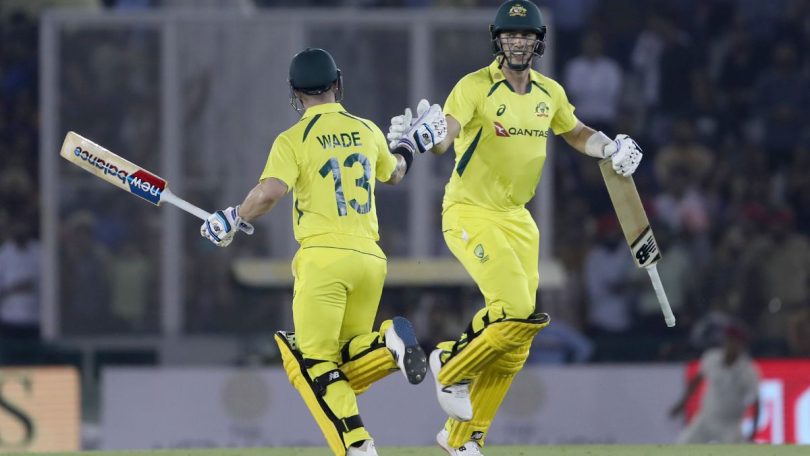 Aggressive knocks by opener Cameron Green (61 off 30) and Matthew Wade (45* off 21) propelled Australia to chase massive 209-run target with four balls to spare and handed a four-wicket defeat to India in the first T20I at IS Bindra Stadium on Tuesday.

Despite being the monumental target, the visitors were never behind the asking run-rate in the innings barring 2-3 overs where they lost three quick wickets.

Skipper Aaron Finch and Green pull off a flying start as they scored runs quickly in the powerplay overs. Finch accumulated 22 off 13 balls with the help of a six and three fours.

Steve Smith joined Green in the middle and the duo continued the pace of scoring unaffected. Grena and Smith stitched 70-run for the second wicket stand and guided the side to 100-run mark under 10 overs. Meanwhile, Green completed his fifty off 26 balls and was scalped by Axar Patel after scoring 61 runs with the help of 4 sixes and 8 fours.

In the 12th over, Umesh Yadav returned in the attack to remove Steve Smith (35) and Glenn Maxwell caught behind in the same over.

Wade and Tim David combined to get 22 runs from Harshal Patel’s 18th over to turn the match on its head. Wade went unbeaten on 45 and took his side over the line with four balls to spare.

India dropped three catches and were left to rue their death-overs bowling.

Apart from Axar Patel, no other bowler was able to hold the Aussies. The left-arm spinner returned with the figures of 3-17 from his four overs.

Earlier, Hardik Pandya’s unbeaten 71 off 30 balls fired India to an imposing 208/6, their highest score against Australia, after being put into bat.

The hosts lost skipper Rohit Sharma and Virat Kohli inside five overs but KL Rahul and Suryakumar Yadav steadied the innings with a 68-run stand.

Rahul made 55 as he and Yadav (46) guided India to 86/2 at the halfway stage of their innings.
India risked losing the momentum after both fell in quick succession but Pandya produced a scintillating knock that was studded with five sixes and seven fours.

The all-rounder raced to a 25-ball fifty and finished with a hat-trick of sixes from the 21-run final over from Green.

Nathan Ellis (3-30) was the pick of the Australia bowlers and also took two catches to send back Rohit and Rahul back to the pavilion.