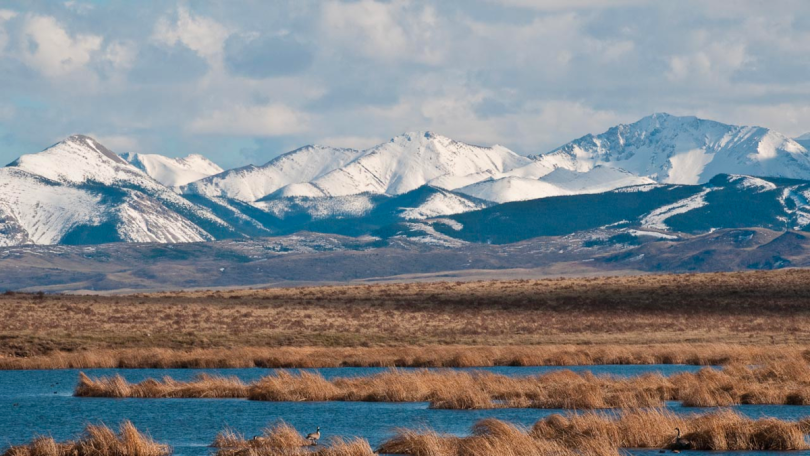 The Pikuni Traditionalists Association, a group representing the cultural and religious interests of the Blackfeet Tribe, has appealed a ruling reinstating a federal oil and gas lease in the Badger-Two Medicine.

Today’s appeal represents the latest development in a 40-year saga over federal energy permitting in a 165,000-acre region of the Helena-Lewis and Clark National Forest that’s often described as the spiritual homeland of the Blackfeet Tribe.

The Badger-Two Medicine features in Blackfeet creation stories, supplies tribal members with traditional foods and medicines, and serves as a corridor for wildlife traveling between Glacier National Park, the Bob Marshall Wilderness Complex and the Blackfeet Indian Reservation. It’s designated a traditional Cultural District and closed to motorized recreation.

Louisiana-based Solanex seeks to build a well pad and temporary bridges in the Badger Two-Medicine for oil and gas drilling with a lease that has featured in administrative, judicial and legislative fights for decades.

The Clinton administration suspended the 6,200-acre lease in 1993, a move that subsequent administrations repeated under pressure from conservationists and tribal representatives seeking to stop energy development in the area.

Congress passed a bill in 2006 that prohibited future leasing on the Badger-Two Medicine and incentivized remaining lease-holders to relinquish their leases. A decade later, the federal government canceled Solanex’s lease, and Solanex challenged the lease revocation in court.

U.S. District Judge Richard Leon of Washington, D.C, sided with Solanex in his Sept. 9 decision, chastising the Interior Department for subjecting the company to “a never-ending series of administrative reviews [that] have precluded any activity for nearly forty years.”

Shared State: Who decides the future of the Badger Two-Medicine?

For many Montanans, the Badger-Two Medicine is synonymous with one of the most significant grassroots conservation successes in recent decades. That story is about Blackfeet tribal traditionalists, political leaders, and conservation groups coming together to defeat oil and gas leases in one undeveloped expanse of wilderness in Montana. Now, the coalition faces thorny questions — what does long-term protection and management of the Badger look like, and who gets to decide?

Intervener-defendants forecasted their intention to appeal Leon’s decision in the aftermath of that ruling, with Blackfeet Historical Preservation Officer John Murray telling Montana Public Radio “the fight is far from over” in a Sept. 13 story about the legal battle over the last remaining lease in the Badger-Two Medicine. They made good on that pledge with the Nov. 2 filing.

“The Blackfeet Confederacy, the Rocky Mountain Tribal Leaders Council, which represents tribes across Montana, Idaho and Wyoming, and the National Congress of American Indians are all standing together with the Blackfeet Nation,” Pikuni Traditionalist Association member and state Rep. Tyson Running Wolf, D-Browning, said in a Nov. 2  emailed release about the appeal. “We will never cede sacred ground to those who would defile it. And it’s not just about Indian Country, for decades now, Republican and Democratic administrations have supported a lease-free Badger because the place is important to all the people of Montana.”

“Drilling in prime grizzly bear and elk habitat and within a Traditional Cultural District makes no sense morally, environmentally, or economically and never will. Just as we helped other leaseholders reach retirement solutions that kept the land and their companies whole, we remain committed to exploring reasonable settlement options with Solanex,” Glacier-Two Medicine Alliance Executive Director Peter Metcalf said in the release.

The release goes on to state that parties opposed to leasing on the Badger-Two Medicine have made “several attempts” to settle the case with Solanex, offering a range of alternatives including cash buyouts, tax credits, land exchanges or access to tribal oil and gas fields.

David McDonald, an attorney with Mountain States Legal Foundation, the law firm representing Solanex in the lawsuit, said his clients have been expecting the appeal but remain “excited and energized” by Leon’s ruling.

“We’re ready to do whatever we need to do to finally get this lease productive,” McDonald said.

In 2020, U.S. Sen. Jon Tester introduced the Badger-Two Medicine Protection Act, which sought, among other things, to make the existing road-building ban permanent and prevent the construction of any additional buildings, pipelines or water facilities in the area. It stalled in committee.

According to a report from the state’s public high schools, 41% of students reported feeling so sad or hopeless for two weeks or more in a row during the 2020-2021 school year that they stopped usual activities — a 16% jump from 1999, when the study was first conducted.

In the last three weeks, members of two different railroad unions have rejected the contracts their leaders negotiated, reviving the possibility of a nationwide railroad shutdown as early as this month.

As hospitals continue to struggle with workforce shortages, a pilot program announced by the Montana University System this fall aims to cut the time required to obtain certain health care degrees in half.