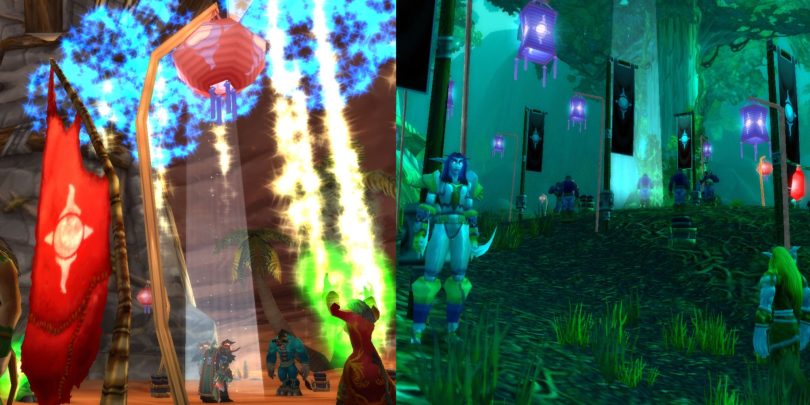 In the real world, it’s the Year of the Rabbit, and celebrations worldwide are exploding with fireworks, seasonal food, and majestic lanterns. The art of World of Warcraft imitates life this time of year, and although it’s not the biggest holiday in the Azerothian calendar, there’s still plenty to eat, wear, slay, and blow up. This is one of the few events in WoW that hasn’t changed much despite various expansions, so with few exceptions, both Classic and retail players can use this guide.

The date of the Lunar Festival changes every year, and the Rabbit has crossed the finish line earlier this time than others, which means that the seasonal vendors, the revered Elders, and their disciples have already set up their decorations in every major city and some smaller ones. Get dressed up and pay some respects to those that came before at WoW’s most beautiful event, the Lunar Festival.

The Lunar Festival in Classic WoW starts on January 20th and ends on February 10th. The retail version of the game starts four days later, on January 24th, and lasts until January 7th.

The Lore Of The Lunar Festival

The Lunar Festival would have to be connected to a place called Moonglade, but the connection is more than just a play on words. It’s a holiday that commemorates the defeat of the Burning Legion many thousands of years ago, and this event took place at the foot of Mount Hyjal, an important historic location next to Moonglade.

This is an ongoing battle in retail. Players in the more recent version of the game who opt to aid in the fight against the continued aggressions near Mount Hyjal are sent to Nighthaven, the main city in the zone, and travel from there to the battlefield.

Nighthaven is a realm of Druids, which means the population is made up of Tuarens and Night Elves, but this is a neutral location where all races are welcome. Players can visit this location whenever they want for the unique goods only available from the Druids, but the location in far-northern Kailmdor isn’t convenient.

RELATED: World Of Warcraft Classic: Lore And History Of The Zombie Plague Event

Like all of the holidays in WoW, this one also has a selection of unique accessories, recipes, and toys. There are two vendors in Nighthaven, and both are standing next to each other on a wooden patio on the east side of town.

The vendors in the capital cities take regular gold, silver, and copper, but those in Nighthaven will only trade their wares for Coins of Ancestry.

RELATED: Most Grindy MMOs Of All Time

The Defeat Of Omen

After accepting the quest offered by Valadar Starsong, the player should be able to summon Omen to finish the quest to gain Elune’s Blessing. Use the rocket launchers to fire off at least 20 clusters to summon Omen.

After his defeat, a pillar of light appears over his body, and the character has to interact with this to finish the quest. The player doesn’t have to be part of the group that kills Omen, nor do they have to participate in his slaying to do this.

RELATED: World Of WarCraft: Hardest Raid Bosses Of All Time, Ranked By Attempts

There are 11 meta-achievements in Classic and 12 in retail to accomplish to get the Elder title. Finish them all, and the character will have enough Coins of Ancestry to buy as many fireworks as they want. Most are easily and quickly completed, but to honor the Elders, be prepared to do some traveling.

For those that are pursuing the World Explorer title, this is another Achievement that can be finished at the same time since the character has to travel around the world anyway.

World of Warcraft is available for PC.

MORE: Classic WoW: The Lore Of The Lich King: Historic Events That Led Arthas To Northrend