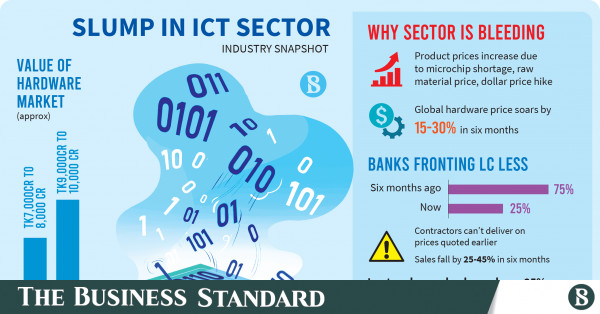 It was a sizable project for Spectrum Software & Consulting (Pvt) Ltd, an IT contractor. The firm had signed an agreement on 31 May with ASA, a microfinance institution, to set up a server at a cost of Tk5 crore.

But an around 20% hike in global prices of required hardware, continuous devaluation of taka against the US dollar and enhanced LC margins, all have got in the way of the work that was supposed to begin soon after the contract.

The IT-service provider now has to spend over 50% more than the original budget if it is to deliver on the contract.

Another contractor, Smart Technologies Ltd has also found itself stuck in around a dozen government projects owing to rising costs.

For instance, the ICT distribution firm is now finding it impossible to deliver on its contract for supplying tablet PCs under a Tk5-6 crore college education development programme with the present costs far surpassing the previously-quoted prices.

Most IT firms are now in a bind over meeting earlier obligations to both government and private projects in the face of soaring cost pressures – from microchip shortage to raw material price hike – coupled with the rising value of the dollar. As a result, they are seeing an alarming fall in sales.

Mushfiqur Rahman, managing director of Spectrum Software & Consulting (Pvt) Ltd, told The Business Standard that global prices of many hardware have shot up by 15-30% in the last six months and they mostly secured orders before this unforeseen cost hike. That is why they now are unable to deliver.

Smart Technologies Director Mohammad Zahirul Islam said no government office is revising bills, and against hundreds of projects firms are at risk of being blacklisted.

In May, the firm secured a work order from the Bangladesh Bureau of Statistics (BBS) for supplying 400 printer-copier machines at a low single digit profit margin and it made the first tranche of supply despite around 18% net loss only because of the soaring dollar price. It is pushing for price revision for the next tranche.

Singapore-based Redington Distribution, one of the top-tier hardware suppliers to the Bangladesh market, has also seen its shipment drop by more than 50% compared to the pre-Ukraine war months, according to its Country Manager Rezwanur Zia.

He estimates that most of his competitors’ business to Bangladesh have dropped at least 40% now.

Too many hurdles at once

ICT firms say many of the crucial ICT hardware’s global prices, especially those of the specialised ones, soared by 15-25% in the last six month.

In this situation, consumers are finding it a no-brainer to snap up clone, non-branded hardware products for their needs as following the continuous rises since 2020, prices of most clone PC components were nearly flat or slightly down since February, offering a breathing space to the market.

Over the same period, the US dollar appreciated by 22% in the past six months, while an expensive tax regime only added to the woes as the duties and taxes are collected against the hiked import price.

Furthermore, the government increased the value added tax on imports of laptops and printers this year.

Even if the price of a product was unchanged in the global market, it would have become 25% costlier for local importers, while products that rose 20-25% in price abroad are up to 70% costlier, say entrepreneurs.

Meanwhile, the central bank’s May 2022 instruction for higher LC margin was adding to the finance costs of importers.

Currently, ICT importers have to pay 75% or more of the Letter of Credit (LC) value in cash, and the banks front the remaining 25%. Six months ago, the importers could have paid 25% for an LC and start the import process.

If large companies are finding it hard to continue importing the costly products now, the smaller firms are in an even worse situation. At the moment, small firms are unable to open LCs, said businesses.

Rashed Ali Bhuiyan said after the Finance Bill this year, five associations representing IT and IT-enabled services (ITES) requested the government to reconsider the increased VAT, but nothing changed.

Nowadays, laptop prices soared by 30-35% in the last six months, which was 15-25% for clone PC components, according to Rashed Ali’s firm Star Tech and Engineering Ltd.

Md Jahed Ali Bhuian, retail director of Star Tech, estimates a 25% volume drop in the laptop segment in the last six months. Only a slower price hike and consumers switching to clone desktop PCs helped the desktop business volume to hover around 15%.

After a sharp rise in adoption of digital tech during the pandemic, inflation-hurt consumers are now finding it difficult to buy their planned devices, he said, adding that the consumer segment is behind 60% of the country’s nearly $1 billion ICT hardware market, while institutional sales make up the remaining 40%.

Tech entrepreneur AKM Fahim Mashroor, a former president of BASIS, said the soaring price of devices is apparently fueling the digital divide that Bangladesh should not allow.

The $600 million Bangladesh software market is mostly catered to by the local industry, while nearly one-third of the annual market still needs imports, said Musfiqur Rahman.

Some of the imported software had been subject to around 15% duty so far, while, this fiscal year, the National Board of Revenue (NBR) has imposed a 58% duty on import value of all the software, he also said, adding, “Thank God, the global price of software did not increase.”

But, dollar hike and the big jump in duties and taxes sharply increased the cost of imported software, which are crucial in projects.

The brunt of the burden currently rests on the shoulders of ICT contractors who supply to government and private projects in bulk as they are mostly failing to pass on their increased costs, especially in the government projects.

BASIS President Russell T Ahmed said It is impossible for any contractor to deliver the products quoted at an exchange rate of Tk86-88 per dollar, when it has to settle import LCs at Tk106-7 per dollar, he said.

Private sector projects are somewhat responsive to the requests for price revisions if the project is urgent,” said BCS Director Mohammad Zahirul Islam.

However, like the other contractors, he is frustrated with the lack of response of the government projects.

When contacted, Senior Secretary of the ICT Division NM Zeaul Alam said, “We are aware of the situation. If those affected parties approach us, we will take steps.”

He said the power on all matters did not rest on the ICT Division, but they would coordinate with the sectors concerned.

Project contractors estimate that the hardware market, including network equipment and security hardware, has shrunk 40-45% by volume, while the software market has also slowed down significantly.

Unlike them, the players more active in the retail segment are a bit better off as individual buyers try to purchase their needed computer at any cost.

Ryans Computer, a popular computer retailing chain in the country, is not much worried about its around 15% volume drop in PC sales because it can absorb the slowdown, said its Managing Director Ahmed Hasan.

Considering the importance of ICT and ITES sector as the largest graduate job creating industry, the government should extend the sector and firms a hand, said BASIS President Russel T Ahmed.

His association wrote to the Bangladesh Bank for restoring a convenient LC Margin and to the Central Procurement Technology Unit of the government to think of project cost revision.