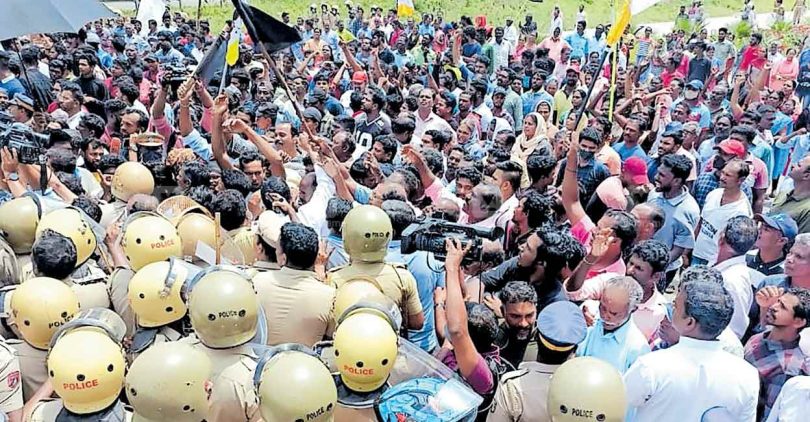 Kochi: The Kerala High Court said on Tuesday that obstructions on the road to Vizhinjam sea port should be removed.

The court also recorded the assurance of protesters that the road to the port construction site won’t be blocked.

The direction by Justice Anu Sivaraman came during the hearing of contempt pleas of Adani Group and the company contracted by it to construct the sea port which is being opposed by thousands of fisherfolk of the adjoining and far-off areas.

Adani, during the hearing, told the court that its order to provide police protection for the construction work was not implemented.

It also claimed that the protesters even took away the police barricades and that around 4,000 fisherfolk were present at the protest site.

It also sought demolition of the tent set up at the protest site.

The protesters, on the other hand, told the court that settlement discussions were being held and the talks were being mediated by Chief Minister Pinarayi Vijayan.

Therefore, some time should be granted for the discussions to arrive at a decision, the protesters told the court.

After hearing both sides, the court listed the matter for further hearing on Friday.

The court had, last week, said it cannot prohibit protests, but at the same time no one should take law into their hands or be a threat to law and order while staging agitations like the one against Vizhinjam Port.

A large number of people have been staging protests outside the main entrance of the multi-purpose seaport at nearby Mulloor for a few months.

They have been pressing for their seven-point charter of demands that include stopping the construction work and to conduct a coastal impact study in connection with the multi-crore project.

The protesters have been alleging that the unscientific construction of groynes, the artificial sea walls as part of the upcoming Vizhinjam port, was one of the reasons for the increasing coastal erosion.

The High Court, on October 19, made it clear that its interim orders to remove obstructions created by protesters at the entrance of the port must be implemented by the State government.

The direction had come during the hearing of an ongoing contempt plea moved by the Adani group.