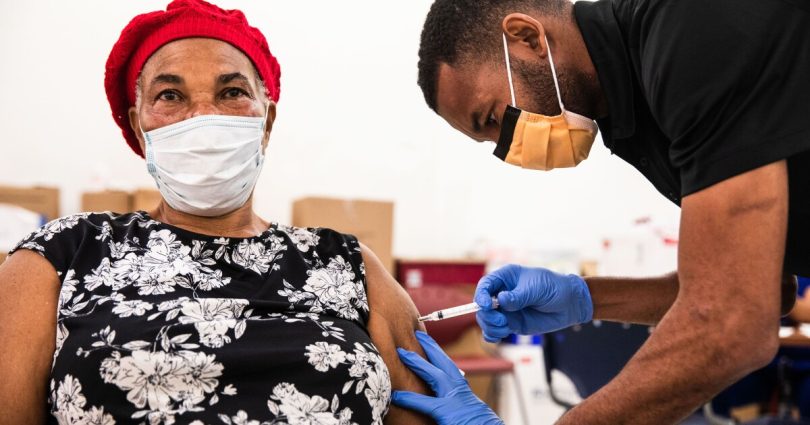 A street team of health Promotoras, or promoters, is continuing to go door-to-door providing healthcare outreach in Immokalee.

Katie Bollbach is the Executive Director of Partners In Health, or PIH, in the United States. The nonprofit provides healthcare in the poorest areas of developing countries. It began its work in Haiti, and over the last 30 years has grown to work in 12 countries.

“The idea that some lives matter less is the root of all that is wrong with the world. And that is, sort of, the founding idea of PIH,” said Bollbach.

In early 2020, Bollbach explained, the organization felt called to assist communities in the United States after seeing the persistent spread of COVID-19 and the challenges local healthcare systems were facing to combat infection rates, specifically in underserved areas like Immokalee.

Immokalee is predominantly a migrant farmworker community. It’s estimated that during the pandemic 15,000-20,000 people continued to work with little support. In June 2020, Immokalee’s test positivity rate was 36% compared to 5.6% statewide, according to data from Doctors Without Borders.

“We knew that COVID-19 was hitting Immokalee incredibly hard early in the pandemic, and in fact, throughout the last 2 and a half years, and really affecting farmworkers in particular in an incredibly acute and disproportionate way,” said Bollbach.

Bollbach said before 2020, Immokalee was already facing severe health disparities, such as a lack of access to healthcare information, health services, and transportation. And farmworkers live and work in incredibly crowded conditions, increasing their risk of illness and infection. PIH reports that half of the farmworkers are under- or un-documented, resulting in the fear of requesting any outside assistance.

PIH deployed a street team of Southwest Florida Promotoras to embed in trusted, local organizations in Immokalee, including the Healthcare Network, faith-based nonprofit Misión Peniel, and the Coalition of Immokalee Workers – all in an effort to bring public health information directly to residents.

Today, PIH is still in action in Immokalee. Michelle Velazco grew up there and is now a community health worker with Healthcare Network in partnership with PIH. She says her work helps bridge the gap between the community and their access to healthcare for not only coronavirus information, but chronic care resources as well.

“They often don’t know how or where to get treatment, so that’s where we come in, you know,” said Velazco. “Letting them know, or even helping them get appointments in Healthcare Network or providing them with other resources that they may need. Transportation, food, you name it. Even if we’re not directly partnered with them, we’re able to help them get that care.”

“We would have often like 300-400 people come to get tested at our events, so we saw that the need was so great that we had to expand and try to target other communities and other conditions such as hypertension and diabetes,” said Velazco. “Giving that information, giving the resources, handing out personal protective equipment, masks, gloves, they just all really seem grateful for that. So, I’m happy that we’re able to do more now.”

Despite any hardships from the pandemic, Bollbach says that building new programs and immobilizing new resources in communities like Immokalee provides a pathway to build a better healthcare model.

“We’ve got a playbook on how to proceed, we just need to keep our foot on the gas nationally and locally to build from this moment and these learnings to a better future,” said Bollbach.

WGCU is your trusted source for news and information in Southwest Florida. We are a nonprofit public service, and your support is more critical than ever. Keep public media strong and donate now. Thank you.