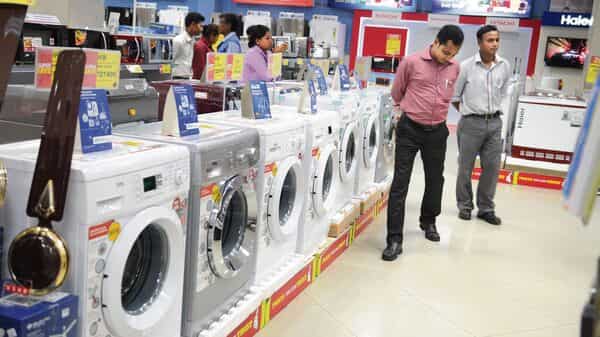 NEW DELHI : Electrical consumer products and consumer durables companies, which had seen strong investor confidence ahead of the festivals, have posted weak numbers for the second quarter, denting expectations.

The S&P BSE Consumer Durables index is down 4% since its 13-September highs, underperforming the S&P BSE Sensex, which was up 0.76% during the period.

Demand was expected to pick up during the festive season, but remained softer than anticipated for many categories and segments. The Q2 performances of many companies also disappointed, as the high cost of carried-forward inventory impacted the operating performance.

Data for 19 manufacturers of consumer durables, including large appliances, suggest that while net sales during Q2 have risen 14.7% year-on-year, profit before interest, depreciation and tax (PBIDT) has declined 41.2% and net profit have more than halved, down by 63.4%.

Analysts said while the cost pressure may ease going forward, the larger concern now remains around the demand scenario.

While the rising input cost pressure has forced consumer durables and appliances manufacturers to take price hikes regularly, this has had a bearing on demand. The high base of last year on the back of strong pent-up demand also has led to lower growth in this year.

The festival season sales were not very encouraging either.

Harshit Kapadia at Elara Capita said that while mobile phones saw good sales the same cannot be said for all products. Fans and air conditioners have continued to see destocking due to energy rating changes likely to be implemented from 1 January 2023. White good sales also have not been very encouraging. Only some smaller electrical appliances are likely to have seen decent sales traction.

Extended monsoons led to a slowdown in demand for construction-related cables and wires, switches and switchgears, said analysts. Wires and cables manufacturers, however, will benefit from falling copper and aluminum prices.

The festive season began from end-September, said analysts at Jefferies. Initial festive offtake (Navratri) seems to have been weaker, but it gained 10-20% traction towards mid-Oct (Diwali).

Channel inventory is higher than normal across most segments. Rising interest rates also remain a concern for demand.

Overall, it is the demand pickup that will be closely watched. Arafat Saiyed, Senior Research Analyst at Reliance Securities said that visibility for demand will improve from Q4, while demand in Q3 may remain soft.

The season is not favourable for cooling products, while energy efficiency rating changes applicable from 1 January means restocking may pick up from Q4.

In view of weaker demand trends, analysts at Jefferies estimate lower sales growth in H2FY23. The companies, however, are likely to see margins improve gradually during the H2FY23 that will cushion their performance helped by softening commodities and firm pricing. Softening raw material costs could help expand FY24 margin by 140 basis points say analysts at Jefferies. The summer demand in Q4 will determine pace of volume growth next year.