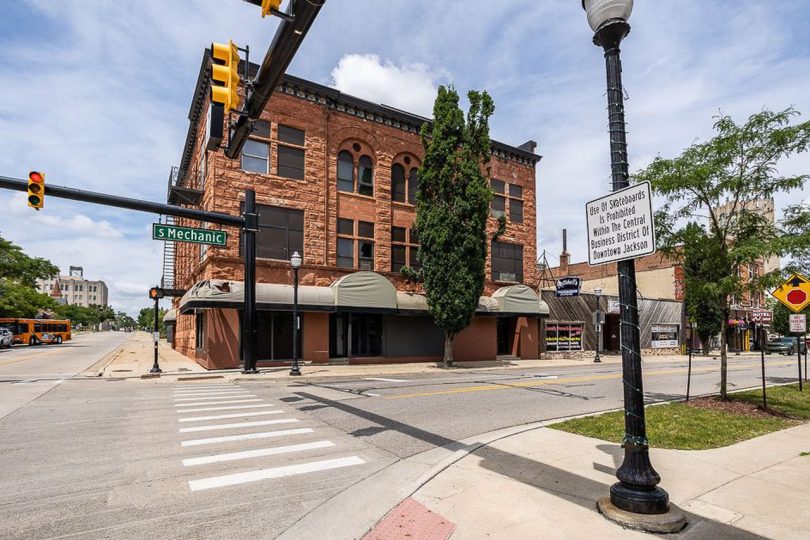 JACKSON, MI – It’s rich with history as a theater and business college, but now Jackson’s Bloomfield building is being brought back to life as office and retail space and apartments.

The building at 100 W. Washington Ave. has been undergoing renovations last few years, co-owner and associate broker Jenifer Scanlon said. Work is still underway, but it’s hoped it to be completed in the near future, she said.

“The Bloomfield building is such a staple to downtown,” Scanlon said. “It’s going to be such a great geolocation to people. We’re excited to bring that to life.”

The building opened 1898 as the Athenaeum. At that time, it was the city’s only real theater, with two balconies and a large stage that accommodated live horses galloping toward the crowd during “Ben Hur.”

The building then became the Majestic in 1927 and was primarily a movie theater. When it closed in 1954, the theater part of the building was demolished for a parking lot.

What remained became the Jackson Business University and later Baker College. The second floor also once housed the city’s library and Michigan Bell Telephone Co. offices. Previous owner Gregory Morano, even recalls there being a music store inside on the ground-level when he was growing up in the 1960′s and ’70′s.

Morano gained ownership of the building in 1996, hoping, he said, to renovate it and bring it back to its original glory.

His plans were to lease out the first floor of the building and live on the third floor. The second floor was to be used for storage, he said.

Morano made minor renovations to the building, including upgraded electrical, HVAC and more. Additionally, he said the outside of the building was painted a ‘pumpkin’ color when he purchased it, and he removed the paint to expose the red brick.

“It was a very unsightly building downtown,” Morano said.

Additionally, he said he had the current ironwork on the fire escape and the fencing custom made to give the building a unique look.

Morano’s biggest goal when renovating the building was to keep the historical value inside, even when trying to modernize it. The original tile flooring and trimming can still be found in the building’s lobby from when it was a theater, he said.

“I mean, not every building has historic theater lobby over 100 years old,” Morano said.

After several years of owning the building, he decided it was time to hand it over to someone else, Morano said. Since April, the building has been owned by father and son Zevi and Simcha Bennet, along with Scanlon.

The new owners have similar, but slightly different, plans for the building. The first floor will still be retail and commercial space, Scanlon said. Preferred tenants for the building would be services needed for downtown residents, she said.

“We’d love to see a fresh market or grocery store, and we have a med spa looking at the place,” Scanlon said.

Around 5,000 square feet of space is available for lease. The ground-floor space can be split by however many tenants who interested in a spot, Scanlon said.

They current owners hope to have tenants into the office spaces in the coming months, she said.

They also plan to utilize the second and third floor of the building as apartments, ranging from 800 to 2,000 square feet. Rent is expected to be between $900 to $2,500 a month, Scanlon said.

They will be walk-up apartments, since there is no elevator in the building, she said, and they will not be ready to lease until next year, Scanlon said, as renovations to the roof currently are underway.

“The lobby is fantastic, the tall ceilings, the tin ceilings, exposed brick walls. It’s going to be a really cool place for someone to call home,” Scanlon said.

More from the Jackson Citizen Patriot: