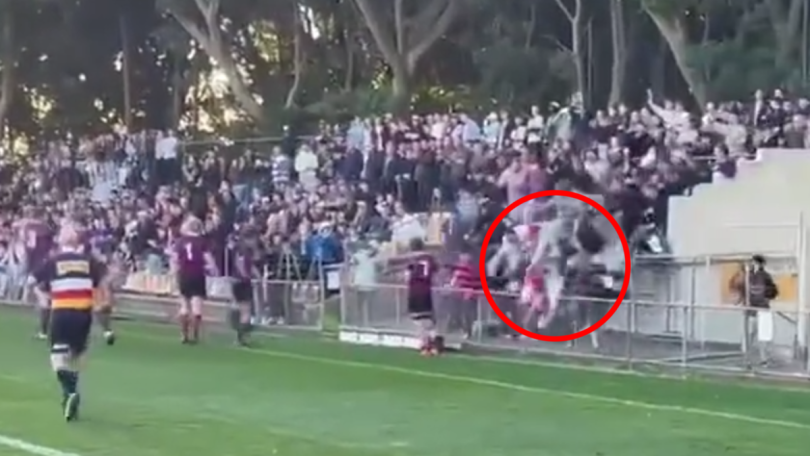 A shocking accident left spectators face-first in cement after a railing collapsed during a schoolboy rugby game at Leichhardt Oval on Saturday.

Thousands watched on as St Joseph’s scored against St Ignatius.

However, video of the incident shows that when the crowd cheered in support, a railing collapsed, sending dozens of spectators falling face-first onto the ground below.

Watch the terrifying footage in the video player above.

No one was seriously hurt, but paramedics did treat a number of injuries at the scene.

It comes just days after the state government was slammed for backing out of a $200 million deal that would have seen the oval and its facilities upgraded.

Prior to the incident, West Tigers chair Lee Hagipantelis called the facilities at Leichhardt oval “third world” and “bordering on dangerous”.

Hagipantelis ousted Premier Dominic Perrottet, noting that he had attended the oval on numerous occassions and would be well aware of the state of the facilities.

Meanwhile, Inner West Council mayor Darcy Byrne called on the Premier to hand back his West Tigers’ membership if he’s not willing to support the venue.

‘He fought until the very end’: Tragic update for young boy after life support battle