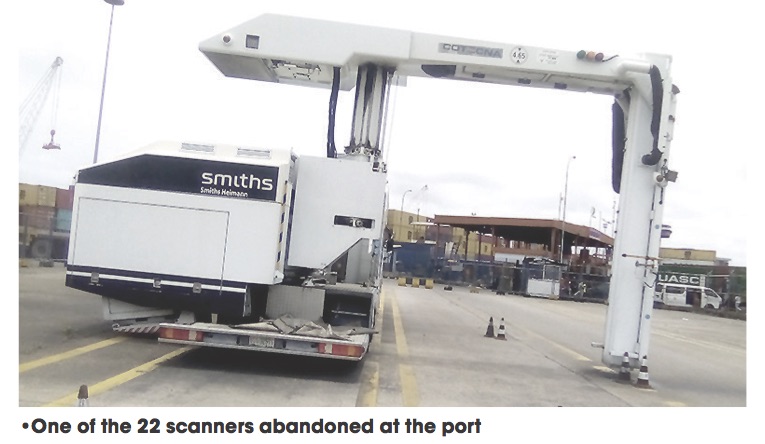 Over the years, all the containers and general cargoes imported through the nation’s seaports and borders were subjected to manual inspection process, popularly known as 100 per cent physical examination due to lack of functional scanning machines.

In 2006, the Federal Government awarded a contract to some service providers to supply and install scanners within Nigerian ports and the land borders.

Twenty-two scanners were procured at the cost of $120 million and handed over to Cotecna Destination Inspection Limited, Societe Generale De Surveillance and Global Scan Systems on a build-operate-transfer basis, with a seven-year contract.

A few years later, all the scanners at the ports have collapsed and are lying fallow. Since then, the Nigerian government has been running the ports without scanners and all cargoes are subjected to 100 per cent physical examination, which is so laborious, time-wasting and laced with corruption.

However, clearing agents and stakeholders in the nation’s maritime industry have cited corruption, aiding and abetting the importation of psychotropic drugs as some of the major reasons the scanners have remained idle.

Recently, lawmakers at the House of Representatives said there was need to probe the Nigeria Customs Service (NCS) over the abandonment of 22 cargo scanners worth $120 million at the seaports. The lawmakers expressed worries over the inability of the NCS to maintain the scanners purchased in 2006.

The Customs management, under the leadership of the Comptroller General of Nigeria Customs Service, Col. Hameed Ali (retd), opted for the purchase of a new set of three scanners delivered early this year, which are yet to be put to use, following stakeholders’ lamentation. However, in July 2020, the Federal Executive Council (FEC) approved $18.12m for the purchase of cargo scanners for the Port Harcourt and Tin Can Island ports to ease port operations.

Minister of Finance, Budget and National Planning, Zainab Ahmed, announced this after the meeting of the council presided over by President Muhammadu Buhari. She said the FEC previously approved the contract in 2018 for the supply and installation of three Rapsican mobile cargo scanners.

“These are large-size cargo scanners that will be placed in Onne port, Port Harcourt port and Tin Can port. They are scanners that can actually drive containers through. That will hasten inspection and assist the Customs to open containers and do the physical inspection as they are doing now that is causing us a lot of time as well as loss of revenue,” she said.

This contract was awarded to a company named Messrs Airwave Limited and the contract is worth $18.12 million of foreign component, there is also local component of N3.255 billion inclusive of 5 per cent VAT.

There was a respite as three brand new scanners were delivered last September to Apapa, Tin-Can Island and Onne ports. But, one year after, the scanners are yet to be put into operation as examination at these three ports is still largely done through the 100 per cent examination.

Presently, there are over 10,000 containers littering various terminals and occupying space at the port due to low pace of physical examination by Customs and other agencies that are involved in the examination of cargoes.

Conversely, many clearing agents have alleged that despite the provision of the non-intrusive machines by foreign bodies, the NCS has deliberately scuttled the process of using the scanners to continuously maintain a physical relationship with importers and clearing agents, a development that breeds corruption at the ports and land borders.

Daily Sun learnt that if the new scanners were optimally used, they would examine 20ft containers within 35 seconds while examining 40ft container within 45 seconds.

In a day, a functional scanner can do 400 containers and above while physical examination can only do up to 80 to 100 containers.

Speaking with our reporter on why the scanners are not working, an importer, Mr. Amos Famuwagun, blamed corruption among government officials as the major reason the Customs scanners are still idle.

“Manual examination of cargo is ineffective, inefficient, expensive, encourages corruption and does not facilitate trade, especially in the area of export and import because it causes delay and takes more time to clear cargo at the ports.

“It is very sad that Nigeria does not have functional scanners at its ports while neighbouring countries like Ghana, Benin Republic and Cote d’lvoire have high-level scanners at their various ports, which is part of the reasons Nigerian cargoes are now going to them.”

He said there are thousands of cargoes littering the ports due to physical examination because there is no space at the various terminals to take them, which was why there was congestion at the ports today. He added that there was no political will to do things the way they should be done at the ports.

He noted, for instance, that N8.9 billion scanners donated by the European Union (EU) under the Regional Transport Facilitation Programme and installed at the Seme border in 2018 had broken down and were abandoned even before the borders were closed in 2019.

He said before EU brought that one, there were about two scanners rotting away at the border; and all these are happening due to corruption among the examination officers.

Meanwhile, the chairman of Association of Registered Freight Forwarders Nigeria (ARFFN), PTML chapter, Emmanuel Ohambele, said 22 cargo scanners were purchased at the cost of $120 million by the Federal Government, which were abandoned by Customs to rot away for reasons that were not cogent.

“Their reason was that there’s no diesel to run the generator to power the scanners. Can you believe such a thing? Both the seaports and land borders were really affected. How can a Federal Government parastatal not have diesel to run a scanner, if it is not sabotage?

“These are really hindering seamless operation at the seaports and also cause a setback for cargo evacuation in the port because the intent of government was 48 hours cargo evacuation from the ports, which we the importers and clearing agents are willing to comply with. Customs has drawn us back with their intent of sabotaging the use of scanners at the port,” he added.

“I don’t know what their excuses are. Should I say it was a result of incompetency or men of Nigeria Customs Service are not well trained to handle these scanners? It gives us concern every day because we cannot move forward to actualise the 48 hours clearance at the port.

“I don’t understand immediately why the Destination Inspection (DI) agent left, the scanners are not functioning. It was functioning well in the care of DI and it was done along side Customs during that period. For seven years, the scanners were functioning and it was in collaboration with Customs. Immediately the contract expired, they handed over to Customs.

“Up till today, it has been one story and the other that Customs has been giving to agents and the importers why the scanners cannot work. Imagine 22 scanners that were purchased with $120 million are left to rot away,” he lamented.

He said over 10,000 containers are littering the ports because there is no space at the terminals to accommodate them due to physical examination.

He said: “Let me tell you how it works: manual examination takes up to two or three days. You book for examination today, they drop it because all the agencies at the port will be on ground to encumber the efforts of the 48 hours cargo clearance.

“All these things boil down to corruption because interfacing causes corruption and there’s no country doing interfacing all over the world again. If it is not corruption, why would Customs want to be involved in physical examination that would involve other people?”

However, national president of the Africa Association of Professional Freight Forwarders and Logistics in Nigeria, Mr. Frank Ogunojemite, said that the purchase of the scanners without any attempt on the part of the government to reach out to the original equipment manufacturer to ascertain if the old ones could be salvaged proved that the problems confronting Nigeria’s modern cargo examination included lack of maintenance culture.

He said the purchase of a new set of scanners was not the solution, adding that the problem would most likely be repeated if no individual or agency is held responsible for their maintenance.

He hinted that ensuring the efficiency of cargo examination and improved competitiveness would prevent the government from engaging the OEM to repair the previous scanners and put them back to use alongside new ones that may be required.

“As the NCS has proved itself to be incapable of handling something as sensitive as operation and maintenance of multimillion-naira scanners, to avoid a repeat of history, it should be left in the hands of contracted DI agents who will operate and maintain them,” he said.