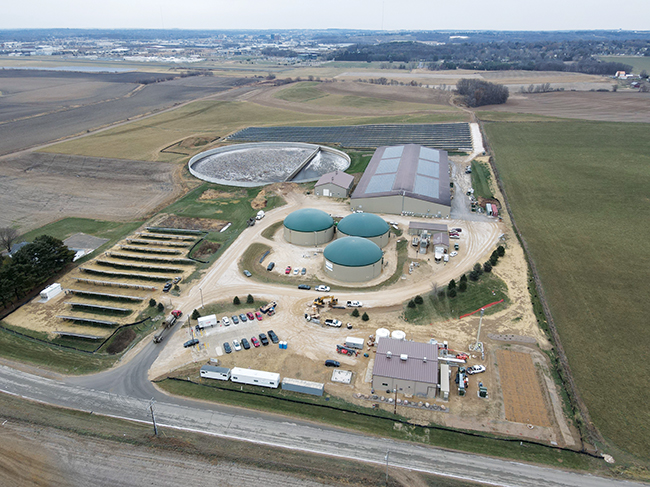 The use of renewable energy in the agriculture industry is an exciting new frontier that—with the right partners—can bring environmental and economic benefits to farmers, surrounding communities, and the renewable transportation fuel industry. And it truly revolves around manure.

The utilization of livestock manure is nothing new. Historically, it is a tried-and-true farming method for improving soil quality to assist in crop growing. Using manure as a natural fertilizer also keeps carbon in the soil and out of the atmosphere, where it can form carbon dioxide (CO2), a greenhouse gas (GHG). This is critical, as agriculture makes up 11% of total GHG emissions. Add to that the transportation and electricity industries that make up 27% and 25% of GHG emissions, respectively, and we are looking at nearly two-thirds of the causes contributing to climate change.

Fortunately, these emissions can all be decreased by using technology that already exists. Through the use of biodigesters, agricultural manure can be converted into renewable natural gas (RNG), and the remaining remnants into valuable materials including fertilizer, potable water, and CO2.

According to the U.S. Environmental Protection Agency (EPA), an anaerobic biodigester is a system that uses organic waste to produce fertilizer and biogas or renewable fuel (Figure 1). It is typically an airtight, high-density polyethylene container that uses anaerobic digestion, a fermentation process that is absent of oxygen. The process separates methane from the solids and liquids that make up manure while effectively keeping the odor from escaping into nearby communities. The methane captured at the top of the biodigester containers can then be used to create RNG.

The process begins when animal manure is deposited into anaerobic biodigesters. When maintained at a temperature of 100F, biodigesters create an environment where microbes thrive and consume the volatile solids in the manure while producing methane gas.

The extracted methane gas can be repurposed in a variety of ways. It has traditionally been used to produce electricity through combustible generator engines, but it can also be used to produce clean RNG fuel. RNG is a critical component of a clean-energy future because it serves as an effective alternative to fossil fuel natural gas. The process of converting cow manure is carbon negative and equates to nearly a negative-300 Carbon Intensity (CI) score.

RNG can be injected into a pipeline and used in the transportation industry for cleaner fuel-burning vehicles. This is especially important for vehicle fleets in states like California, Oregon, Washington, and New York, all of which have regulations that require corporations to use cleaner-burning vehicle fuels. Using RNG reduces pollution and enables organizations within the transportation industry to meet those requirements. Research shows that when all climate benefits are considered together, RNG from dairy manure can reduce GHG emissions by up to 400% when used to replace traditional vehicle fuels.

Investing in anaerobic biodigesters also further benefits the agriculture industry. Local farmers who send their manure to an anaerobic biodigester facility reap the benefits from various nutrient streams once the manure is further processed. After the methane is extracted, nutrient concentration systems can break down manure further to remove pathogens like phosphorous that previously contaminated nearby water sources.

The final product of solid material made up of fiber is returned to farmers to use as compost and bedding, saving farmers the expense of purchasing sawdust, wood shavings, straw, or sand. In addition, through nutrient concentration systems, the liquid material can be further separated into a concentrated liquid fertilizer for farmers to use in their fields. This leaves stream-dischargeable water that can either go directly back to the local water system or be used by local farms for irrigation or livestock.

The Future Is Now in Wisconsin

When we say “farms of the future,” we actually mean right now. This biodigester technology is being used at a facility in Middleton, Wisconsin, located just outside the state’s capital (Figure 2). The project is a notable example of what the agriculture industry can achieve today.

EnTech Solutions, a clean energy provider, and Northern Biogas, a digester and RNG development company, partnered with local farmers and Dane County to repurpose a biodigester that had formerly been producing electricity. The facility in Middleton features three anaerobic biodigesters that break down manure brought in from four local dairy farms.

In 2021, more than 27 million gallons of manure were processed by the facility and more than 57,000 pounds of phosphorous were removed from the Yahara Watershed, a natural drainage system in southern Wisconsin. The partnership also features Aqua Innovations’ nutrient concentration system and U.S. Gain as the off-taker of the RNG.

This self-sustaining network benefits the farmers who can better manage their animal waste, prevent the release of methane into the atmosphere and receive the resulting nutrient-dense materials for their fertilizer and bedding (Figure 3). It benefits the county and community by reducing the phosphorous runoff to nearby streams and lakes. And it benefits the renewable transportation fuel industry with the RNG created by the extracted methane.

Beyond these benefits, the Middleton facility was also strategically upgraded to run off of renewable energy. EnTech Solutions powers the Middleton facility using distributed energy in the form of a microgrid that is powered by rooftop and ground-mounted solar panels and battery storage. The solar energy system generates more than 2.8 MW of clean energy, which could power more than 400 homes. This effectively reduces emissions by more than 13,500 metric tons per year of CO2 equivalent, which is like eliminating nearly 34 million miles driven by cars.

The more layers of renewable energy that are integrated into the creation of RNG, the greater the impact on reducing GHGs and the lower the CI score. For example, if RNG was transported using electric vehicle fleets powered by renewable electricity, that would further reduce the impact on the environment. By producing and utilizing renewable energy at the facility through solar and microgrid technology, EnTech Solutions is lowering the CI score of the RNG, making it cleaner and more valuable.

The long-term benefits continue to reach farmers as well. Transforming agriculture operations preserves farm families’ way of life while solving many of the problems facing them. Advanced anaerobic biodigesters open the door to more revenue from crops and dairy, as well as increased output of manure turned into RNG, fertilizer, and bedding, creating an easier path to farm growth.

The anaerobic biodigester facility in Middleton, Wisconsin, is a prime example of what farms of the future can look like. Using renewable energy, even at the scale of an industrial facility, is a self-sustaining model that can be replicated in communities throughout the country.

Cows produce manure—that is nothing new—but now the technology exists to reap benefits from that waste with anaerobic biodigester facilities, nutrient concentration systems, and renewable energy sources, allowing clean carbon-neutral or even carbon-negative operations. These advanced facilities allow farmers to continue to run their operations but ensure they are being more environmentally conscious. We have said they are the farms of the future, but in reality, that future is now.

The question of how to grow enough food to feed a growing global population while simultaneously reducing the carbon footprint of operations is an ongoing challenge from consumers and policymakers, and one that has many facets to it. The energy experts at EnTech Solutions remain committed to supporting the dairy industry as a solutions provider in the world’s quest to achieve net neutrality. The opportunity exists to create economically viable options for managing agricultural waste that can be easily replicated and that can provide solutions to a number of waste-related challenges the industry faces.

Based on feedback from various stakeholders, this project has been an overwhelming success for all involved. Positive impacts for the community include an improvement in the environmental watershed by more reliably removing phosphorous from farm runoff. City and county officials have shared that this process has become a source of pride that other municipalities would like to emulate.

In December 2021, EnTech Solutions received a Climate Champion award from the Dane County Office of Energy and Climate in recognition of our actionable and innovative steps toward climate success in the county. At the farm gate, there is a huge boost to the image and reputation for dairy farming in this area by shifting public perception from dairy farming contributing to the GHG problem to the farmers actively working to solve climate change issues.