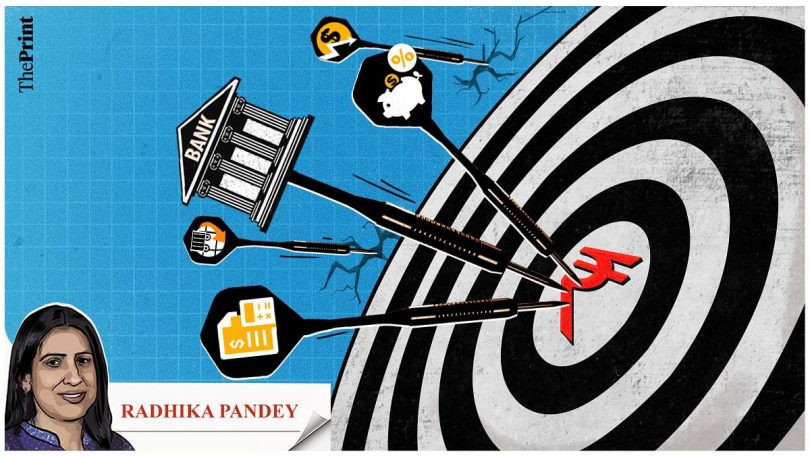 If in 2020 and 2021, economies were dominated by Covid-related disruptions and subsequent opening up, 2022 was a year of shocks and after-shocks characterised by geo-political tensions, high global inflation, the US Federal Reserve responding to inflation with the steepest interest rate hikes in decades, and global growth slowdown.

These shaped the trajectory of India’s fiscal position, inflation, markets, currency and exports.

Failure to achieve the inflation target

Headline inflation was already above the upper threshold of 6 per cent at the beginning of 2022. The situation worsened after Russia’s invasion of Ukraine. In April, it touched an all-time high of 7.79 per cent and remained outside the 6 per cent band till October.

The RBI had to submit a report by 12 November. While the report was not made public, there were arguments to make the report public to strengthen the agency’s accountability.

While in the latest monetary policy review, the RBI’s Monetary Policy Committee (MPC) voted to raise rates by a lower 35 basis points, it would continue to keep a watch on inflation as price-pressures have progressively become more broad-based.

While 2020-21 was a year of record inflows by foreign portfolio investors (FPIs) due to ultra-low global interest rates, 2022 was a year of massive outflows.

As of 27 December, 2022, FPIs have withdrawn Rs 1.34 lakh crore from Indian equity and debt. Two distinct trends can be seen in the movement of foreign capital. The first half of the year saw FPIs selling equities and bonds worth more than Rs 2 lakh crore. Aggressive monetary policy tightening by global central banks, rupee depreciation, rise in global crude oil prices and fears of global recession triggered outflows of capital.

The second half saw a return of foreign investments. In the second half, there were growing indications that the pace of rate hike will go slow amid moderation in US inflation. After peaking in June, US inflation has seen a gradual moderation. This optimism fuelled the return of FPIs to Indian markets. In addition, robust earnings of the corporate sector and healthy balance-sheets of banks led FPIs returning to the Indian markets.

Robust credit growth and domestic consumption has led FPIs to invest in banking and Fast-moving consumer goods (FMCG) sectors. Though FPI investments oscillated between outflows and inflows, the domestic institutional investors (DIIs), particularly the Mutual Funds, supported the markets for the first ten months of the calendar year 2022. Only in November, Mutual Funds net buying slowed owing to profit booking.

Export slowdown after a stellar run in 2021

Global trade growth was strong in 2021 and reached a record level of USD 28.5 trillion, an increase of 25 per cent relative to 2020. However multiple disruptions, starting from the Omicron wave, resulting in supply chain disruptions, geo-political conflicts, lower global demand due to higher inflation in advanced economies, had a bearing on global trade growth.

According to the latest global trade update by the United Nations Conference on Trade and Development (UNCTAD), global trade growth has turned negative during the second half of 2022.

India’s exports have also turned sluggish in tandem with global trade trends. In 2021, non-oil, non-gems and jewellery exports staged a strong recovery, after the pandemic induced slump. However, since May, 2022, non-oil, non-gems and jewellery exports have slowed down. Owing to demand slowdown from major trade partners, exports of engineering goods, iron ore products, textiles, organic chemicals have seen a sharp slump.

Interestingly, the slump in India’s exports is seen to have a high correlation with global growth as measured by the global Purchasing Managers’ Index (global PMI).

The banking sector was resilient in 2021-22 and continued its resilience in 2022. Comfortable capital buffers, better asset quality and enhanced profitability indicators reflect the robustness of the banking sector.

Banks gross non-performing assets ratio (GNPA ratio) declined to 5 per cent in September 2022 from 5.8 per cent in March 2022. Despite rise in interest rates, credit growth of banks hit a 10-year high of 17.5 per cent at September 2022 end. This momentum was maintained in October with bank credit posting a growth of 18.3 per cent.

The year 2022 saw a turnaround in the performance of public sector banks due to clean-up of stressed assets, better regulation and improvement in corporate credit demand.

The fiscal deficit for the current financial year was pegged at 6.4 per cent of GDP. In absolute terms it amounts to Rs 16.6 lakh crore. The thrust on capital spending continued with the government budgeting Rs 7.5 lakh crore for capex.

On the revenue side, collections have been robust and are likely to exceed the budgeted figure. Net tax revenues till October have been around 11.7 lakh crore or 60.5 per cent of the corresponding budget estimate of Rs 19.3 lakh crore. This figure has been buoyed by strong direct tax collections.

Radhika Pandey is Senior Fellow, and Pramod Sinha is a Fellow at National Institute of Public Finance and Policy.

Also read: November saw a drop in inflation but some major states missed out. Here’s why