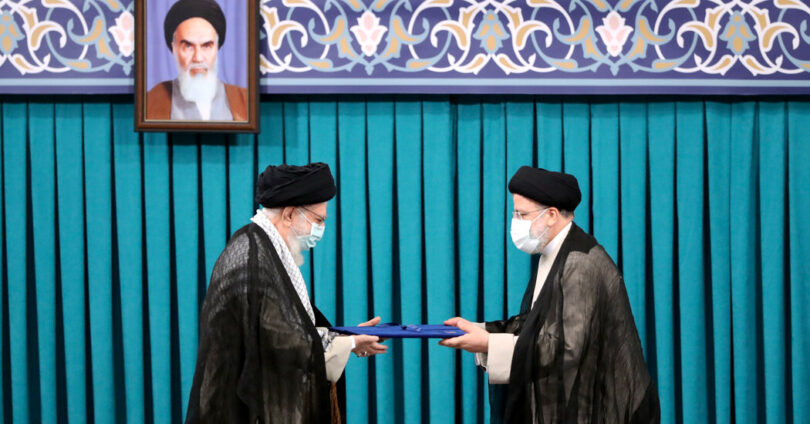 An extremely conservative cleric is being inaugurated as president of Iran on Thursday.

The cleric, Ebrahim Raisi, won a June election that had disqualified any potential rivals. Critics said Mr. Raisi’s victory had been engineered to reflect the choice of his mentor and ally, Iran’s supreme leader, Ayatollah Ali Khamenei.

The election called attention to the role of Iran’s president in a system of governance dominated by clerical leaders since the Islamic revolution that overthrew the American-backed monarchy more than four decades ago.

Although the system contains some checks and balances, power has been increasingly concentrated in the hands of the supreme leader, who under Iran’s Constitution has more authority than the president.

Here’s a closer look at the president, and the powers he does — and doesn’t — possess.

Who is Mr. Raisi?

Until last month, Mr. Raisi, 60, was the head of Iran’s judiciary. He spent much of his career as a prosecutor and is on a U.S. sanctions list over his human rights record. In 1988, he sat on a committee that sent about 5,000 imprisoned government opponents to their deaths, according to human-rights organizations.

He is a protégé of Mr. Khamenei, 82, who is largely responsible for Mr. Raisi’s ascendance. They share a deep suspicion of the West in general and antipathy toward the United States in particular. Mr. Raisi is believed to be Mr. Khamenei’s main choice to succeed him.

Previous presidents often disagreed with supreme leaders — up to a point — but Mr. Raisi could become the most like-minded person yet to hold the post.

What is Iran’s system of governance?

Iran’s government is separated into executive, legislative and judicial branches, and it holds elections for the president, members of Parliament and local officials. But it is also governed by an Islamic clerical hierarchy that oversees the civilian administration.

Much of that hierarchy’s power is vested in the Guardian Council, a group of 12 men. Half are clerics appointed by the supreme leader, and half are lawyers chosen by Parliament on recommendations from the judiciary head — who is also appointed by the supreme leader. The council vets all laws passed by Parliament and approves all candidates for president, giving it enormous control.

The supreme leader is chosen by a special body of clerics known as the Assembly of Experts. Although that group is an elected body, candidates for membership must also be vetted by the Guardian Council.

Who devised this system?

The original structure was devised by Iran’s first supreme leader, Ayatollah Ruhollah Khomeini, a once-exiled cleric who rode a wave of widespread anger in ousting Shah Mohammed Reza Pahlavi and his repressive monarchy in the 1979 revolution.

Mr. Khomeini created a hybrid system for the new Islamic Republic of Iran that enshrined religion at the center of its identity. It is “one part unelected, one part elected — the Republic part,” said Mohsen Milani, an Iran scholar who is the executive director of the Center for Strategic & Diplomatic Studies at the University of South Florida.

What exactly can the supreme leader do?

He is the commander of the armed forces, including the Islamic Revolutionary Guards Corps, a paramilitary force that exerts extensive control inside the country. He can declare war and pardon prisoners. He has the final say on all national security and foreign policy matters, most notably on Iran’s nuclear agreement with foreign powers that is now at risk of collapse.

Aside from appointing the chief of the judiciary, the supreme leader chooses or strongly influences choices for key posts in the president’s cabinet, notably for the defense, foreign, intelligence and internal security jobs. He also controls state media.

“In the Iranian system, the supreme leader is the ultimate authority,” said Mehrzad Boroujerdi, an Iran studies expert at Virginia Tech and director of its School of Public and International Affairs. “He can delineate the general policies of the entire regime.”

Mr. Khamenei’s effective domination over the Guardian Council offers some insight into the extent of his power. Although he officially appoints only six members, he unofficially determines the other six through his appointment of the judiciary head, who would be unlikely to recommend anyone objectionable to Mr. Khamenei.

What powers does the president have?

Although he is subservient to the supreme leader, the president does command some authority — within limits — as the official head of state.

He appoints ministers for key economic posts. He signs treaties, oversees the budget and controls the civilian structures of government responsible for public works, health care, electric power, water and other natural resources.

He also derives power from the supreme leader as the person responsible for fulfilling his policies.

What is the most urgent problem Mr. Raisi faces as president?

Iran’s economic weakness, compounded by the pandemic, a water shortage and the severely damaging effects of American sanctions, is considered his most immediate problem. He will need to find a way to end, ease or circumvent those sanctions, which have helped unravel the 2015 nuclear agreement negotiated by his predecessor, Hassan Rouhani.

The supreme leader has railed against the United States over the nuclear dispute but has not terminated negotiations to resolve it.

Could Mr. Raisi ever defy the supreme leader?

Mr. Raisi, a former student of Mr. Khamenei’s, is seen as highly unlikely to ever disagree with him — or even show any hint of divergence, Iran experts said.

“One thing to understand: Raisi was Mr. Nobody until the supreme leader decided to turn him into one of his protégés and appoint him to powerful positions,” Dr. Boroujerdi said. “You ask yourself, ‘Why would Khamenei invest so much power in one individual if he was not grooming him?’”

Gary Sick, a research scholar at Columbia University’s Middle East Institute who was the principal White House aide for Iran during the 1979 revolution and the American hostage crisis there, said Mr. Raisi will be judged on his ability to improve the quality of life for Iranians, including those who did not vote for him.

In a recent article, Dr. Sick wrote that as long as Iran is controlled by conservative officials, Mr. Raisi will not be able to blame more moderate elements for any failures during his presidency.

“Raisi is blessed with a political clean slate, with hard-liners dominating every part of the government,” Dr. Sick wrote. “But that blessing may be short lived.”