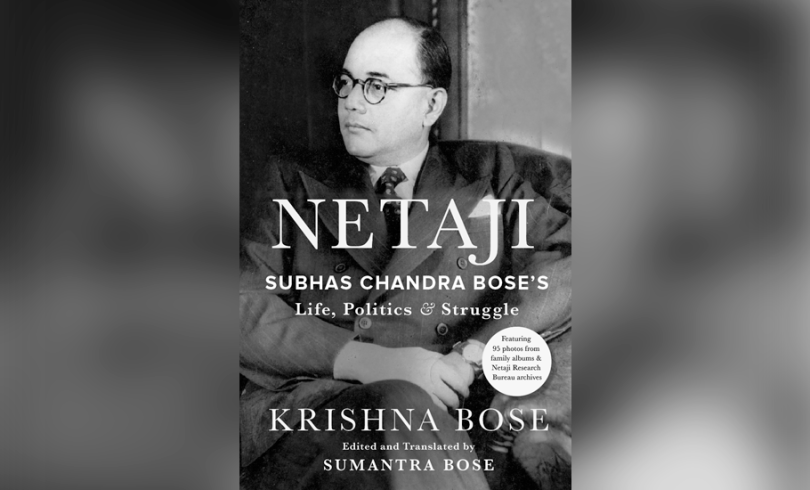 An excerpt from ‘Netaji: Subhas Chandra Bose’s Life, Politics and Struggle’ by Krishna Bose, translated by Sumantra Bose, in which she recounts how the plane the freedom fighter had boarded in Saigon on August 17, 1945, crashed after the refuelling stop in Formosa

When you enter the museum at Kolkata’s Netaji Bhawan, 38/2 Elgin Road, the first exhibit is a page from a diary. In it, Janakinath Bose records that his wife Prabhabati gave birth, on 23 January 1897, to a son, Subhas Chandra. The baby born in Cuttack (Odisha) that day was destined to become a world traveller. He spent his childhood in Cuttack and adolescence in Calcutta, then went to England to study at the University of Cambridge. Jailed in Mandalay, Burma from 1924 to 1927, he spent a lot of time during the 1930s in enforced exile in Europe. Bose became intimately familiar with Europe and many of its cities: Vienna, Prague, Rome, Berlin, Dublin and London. In February 1943, he boarded a submarine in Kiel in northern Germany and travelled underwater for over ninety-three days to East Asia. During the next two years, he was in Singapore, Malaya, Burma, Thailand, Japan and China. The globetrotter’s final port of call in August 1945 was Taipei, the capital of Taiwan, then known as Formosa.

Taipei first came to my attention in 1957, when I read a book (published in 1956) called The Gallant End of Netaji. This was shortly after my marriage to Sisir Kumar Bose, son of Netaji’s older brother Sarat Chandra Bose. The book’s author was Harin Shah, a journalist. In 1946, Mr Shah visited Taipei to ascertain the facts about the airplane crash of 18 August 1945. The book was based on that investigation and described Netaji’s last hours in great detail. It was a distressing read.

Sisir was already familiar with Harin Shah’s account. After returning from Taiwan, Shah spoke to Sardar Vallabhbhai Patel. Sardar Patel asked him to speak to Sarat Bose, who was Subhas’s closest political ally and lifelong confidant. In November 1948, Harin Shah was posted as press attache in the Indian embassy in Prague when Sarat Bose visited the city during an extensive tour of Europe. Shah decided to take this opportunity to speak to him. Sisir, who was accompanying his father, was asked by Sarat to be present in the hotel room when Shah came over and briefed them about his inquiries and findings in Taiwan two years earlier. Sarat, who loved Subhas dearly all his life, heard Mr Shah out and was very distressed by the account. Sisir’s autobiography of his childhood and youth, Subhas and Sarat: An Intimate Memoir of the Bose Brothers, published posthumously in its English version in 2016, describes this meeting in Czechoslovakia’s capital.

In 1965, Sisir – with whom Netaji plotted his 1941 escape from the Elgin Road house and who drove him on the escape’s first leg to the Gomoh railhead in Bihar (now in Jharkhand) – visited Taiwan himself. In the meantime, Sisir, a paediatrician by profession, had founded the Netaji Research Bureau at the house (Netaji Bhawan) in 1957 to document all chapters and aspects of his uncle’s extraordinary life. Sisir first went to Japan, where he met most of the Japanese political and military figures who had come into contact with Netaji during 1943–45 and been involved in some way with the Azad Hind movement and the Indian National Army. He stopped over in Taiwan on his way back to India. When he returned to Calcutta via Bangkok, we stayed up all night as I listened to him recount his time in Taipei.
Sisir had wandered around freely and taken many photographs in the premises of the old airport where the crash took place on 18 August 1945, as well as the nearby hospital where Netaji breathed his last and the crematorium where his funeral rites were performed.

He also visited the Taiwanese foreign ministry. He was told there that the crash took place when the Japanese were still in effective control of the island (Formosa), during a chaotic period three days after Japan’s surrender to the Allies. The present (1965) government of Taiwan had been established only in 1949, when the remnants of Chiang Kai-Shek’s Kuomintang regime fled there from mainland China upon being defeated by Mao’s Chinese Communist Party (CCP) forces. So, they did not have any documentary record of the crash. The Taiwan authorities gave the Mukherjee commission, the third to inquire into Netaji’s fate, the same formal response nearly four decades later. On the basis of that response, this commission reported that no plane crash had happened at the Taihoku (Taipei) airfield on 18 August 1945.

My chance to visit Taipei came in 1979. By that time, the Khosla commission of inquiry (1970) into Netaji’s fate had completed its work and, like the earlier Shah Nawaz commission (1956), confirmed the veracity of Netaji’s death in the plane crash on the basis of the convincing and consistent testimonies of the crash’s survivors and of the many eyewitnesses to its immediate aftermath. It had reiterated the recommendation of the first commission that the late leader’s ashes be brought back to India with due honour from Tokyo’s Renkoji temple, where the remains have been preserved since September 1945.
Sisir and I travelled first to Japan in 1979 and one day we met at the Renkoji shrine with many of Netaji’s old Japanese associates and close acquaintances, in the presence of its chief priest, Rev. Mochizuki (junior, son of the priest who had been in charge in 1945).

Generals Fujiwara, Isoda, Arisue and Katakura were present, among others. I already knew most of them because they had come to Calcutta in the 1960s and 1970s to attend conferences at the Netaji Research Bureau. General Katakura, a bluntly spoken man, expressed astonishment that the ashes had not been taken back to India thirty-four years after Bose’s demise and were still lying in the Renkoji temple, which was intended to be a temporary resting place.

In Kyoto, we met with the family of General Shidei, who was one of Netaji’s co-passengers on the plane and was killed instantly when it crashed. They showed us the general’s military record. It said: ‘Date of death: August 18, 1945. Place of death: Taihoku airfield. Cause of death: Death by war’.

Our main host in Japan was General Fujiwara Iwaichi (1908–1986). As a major in Japanese military intelligence, he had been intimately involved with the INA since its formation in Singapore in 1942. He retired from active service in the mid-1960s as a lieutenant general in the Japan Self-Defence Forces, established after World War II. Fujiwara, who visited us many times in Calcutta, starting in 1967, remained a friend of India all his life. When he died in 1986, a telegram from his family reached us in Calcutta: ‘Fujiwara returned to Hindustan forever’.

On our 1979 trip to Japan, the plane had actually had a stopover in Taipei. But we were uncertain whether we would be able to visit Taipei during our return journey because India, like most countries, did not have full diplomatic relations with Taiwan. Fujiwara, ever resourceful, arranged Taiwan visas for us in Tokyo. He also informed a friend of his in Taiwan, a business tycoon, about our impending arrival. This gentleman became our host in Taipei and his staff acted as our guides.

Sisir and I landed at Taipei’s Chiang Kai-Shek International Airport and checked into the city’s Grand Hotel. There was much excitement going on because Elizabeth Taylor was visiting Taiwan. From the window of our hotel room, I spotted an airport; planes were landing and taking off. We were told that this was the old Taipei/Taihoku airport, which was now used for domestic flights.

The morning after a formal welcome banquet – with the typical dozen courses – attended by various state officials, the tycoon, Mr Oo, drove us personally to the domestic airport. Sisir remarked that the terminal had been modernized and expanded since his 1965 visit. Mr Oo took us along a corridor to a point with an unrestricted view of the runway, framed by hills at some distance. He said the runway had been widened a bit but was otherwise the same as in 1945.

Standing there, I was reminded of Col. Habib-ur Rahman’s account of what had happened there on the afternoon of 18 August 1945. As Netaji’s aide-de-camp, the INA colonel had been his only Indian companion on the plane. Originally from the Bhimber district of the princely state of Jammu and Kashmir (presently part of Pakistan-occupied Kashmir), he died in Pakistan in 1978.

Netaji and Col. Rahman ate bananas and sandwiches sitting under an awning on the tarmac during the refuelling stop in Taipei. They had boarded in Saigon (now Ho Chi Minh City) on 17 August, stopped overnight in Danang in central Vietnam – a port city then known by its French name, Touraine – and the plane was headed next for Manchuria. Habib was feeling a little cold and he asked if Netaji would like to put on a sweater; Netaji said no. Habib put on a sweater standing by the plane.

As soon as the plane took off, Habib heard a loud sound like an explosion, and one of the plane’s twin propellers (the one on the left side) detached and fell off. The plane crashed to the ground and fire immediately engulfed its front section.

Krishna Bose (1930-2020) was a Member of Parliament for three terms, elected to the Lok Sabha from West Bengal. From 1999 to 2004, she chaired the parliamentary standing committee on external affairs. In her professional life, she was a professor of English Literature. In December 1955, Krishna (nee Chaudhuri) married Dr Sisir Kumar Bose (1920-2000), the son of Netaji’s older brother and lifelong confidant Sarat Chandra Bose. Aged 20, Sisir was Netaji’s chief aide in his daring escape from India in 1941 and drove the escape-car from the family’s mansion on Kolkata’s Elgin Road. Krishna helped Sisir build the Netaji Research Bureau at Netaji Bhawan from 1957 onwards. After Sisir’s death, she served as NRB chairperson for twenty years, until her death in 2020.