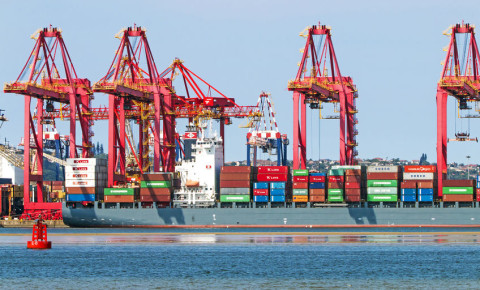 Andrew Pike, the head of Bowman’s Ports, Transport and Logistics sector, speaks to Refilwe Moloto about how the war in Ukraine is impacting our ports and hampering operations.

Four months of the Ukraine-Russia war is having a catastrophic impact on the South African economy, with billions being lost through exports. Since the start of the conflict, the prices of wheat and fuel have soared globally, raising the cost of living expenses in South Africa.

But the war is having a crushing impact on the shipping industry. Refilwe Moloto spoke to Andrew Pike, the head of Ports, Transport and Logistics at Bowman’s Ports, who said the global logistical problems had created bottlenecks at South African ports.

The good news is that any problems don’t lie with our ports, it lies with European ports. Our exports to Russia and Ukraine, those are big ticket items. The problem is that ships refuse to call in to Russia and the only ships calling in Russia are Chinese ships.

If you’ve got an export from South Africa to Russia, it’s not subject to sanctions. But how are you going to get it there? The only way is to put it onto a mainstream shipping line which will then carry it to Europe. There it has to be discharged and scanned for weapon imports. Then you have to wait for a ship to carry it to Russia and so you have a longer wait to have your cargo carried.

This entire process is compounded by the disruption to the payment system. With a number of Russian banks suspended from the Swift system, it means financial transactions will experience a substantial delay.

Everyone is under significant pressure to try and find different export markets because Russia is a scary place to do business with. There was a report that transit times have gone up from three weeks to over 90 days for exports from South Africa to Russia. So that means delayed payments and everything slows down. It’s hurting exporters quite badly.

When it comes to imports, the opposite applies. Ships have to discharge their cargo and transship it in Europe, which adds to the transport costs. Added to that, there are cargoes embargoed in Crimea and the Black Sea. Pike estimates there are 2 tons of grains in silos in Ukraine that cannot be moved.

We are sweating to get these cargoes in here. What we can get is from other sources and the prices have gone through the roof. It’s costing us big time.

South Africa’s biggest exports to Russia is manganese ore and citrus fruits, which totaled over R6 billion in 2021. With more and more countries restricting trade with Russia, the country will be forced to source goods from South Africa. However, Pike believes it will be ideal for South Africa to export to other countries, particularly where euros and dollars are traded.

Scroll up for the interview.