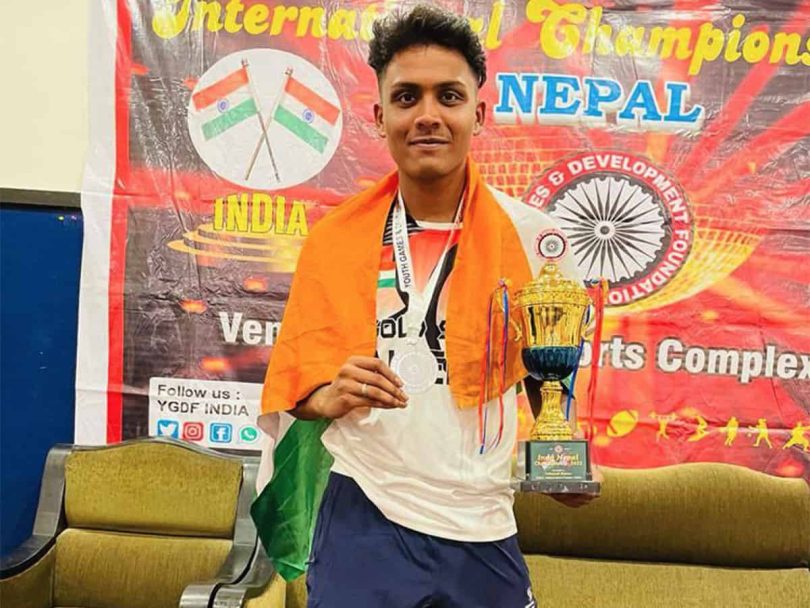 Born on December 23, 2000, Razzak is pursuing B.Com final year at the Loyola Academy in Alwal. A resident of Secunderabad, he is one of the 12 players who represented the National Sports and Education Development Federation (NSEDF) in the tournament held from May 16-20 in Nepal’s Pokhara region.

Expressing pleasure over his achievement Razzak said, “Alhamdulillah, It is a great experience to have represented the country at the India-Nepal Championship 2022.”

“To have secured a medal for India for the first time in 8 years makes it even more special” he exclaimed.

Sharing the details of the tournament, Razzak said, “There were 12 teams from across Asia in the competition.” India was placed under group A along with Sri Lanka, Nepal, Pakistan, Kuwait, and Bahrain.

Other players who represented India at the tournament were Kanishk, Suraj, Ashu who hail from Delhi. Tushar, Tarun and Dipanshu made the cut from Haryana. Karthik and Deepak natives of Jammu, Nikhil from Uttar Pradesh and Harry from Punjab.

Speaking to Siasat.com, Razzak’s father, Shaik Yousuf said, “He plays as a setter and is responsible for strategising the attacks for his team.”

A setter is entrusted with the team’s offense. They aim to receive the second touch, setting it for an attacking player. This is why, they need to have effective communication skills to direct the offense and make quick decisions on the court.

He is supposed to identify the opponent’s blockers and pinpoint the weakest of them. Since they can play in either the front or back row, setters must be prepared to block, dig and receive a serve on defence.

In the past Razzak represented the Ranga Reddy district in Volley-Ball tournaments organised by the School Games Federation of India (SGFI) in the year 2015-16. The athlete secured admission to a hostel run by the Sports Authority of India (SAI) for Volleyball trials in 2017. He further added that SAI officials were impressed with Razzak’s performance during the trials.

“He also represented his college at the Inter-Collegiate meets in 2018-19 and 2019-20, the team emerged victorious in both the editions,” said Yousuf.

Shedding light on the training regime, the father said ” I have been training Razzak myself with an emphasis on running, and jumping.” He went on to say, “Coach Sandeep Reddy from Loyola Academy has also been instrumental in maintaining Razzak’s fitness.”

Speaking about his own background, Yousuf said, “I was employed in the retail sector before the COVID-19 outbreak . Now, I work as a contractor dealing with electric equipment.”

Expressing pleasure over his son’s performance, Yousuf said, “It is as matter of pride for me to see him succeed and being a sportsperson myself, Razzak’s success is even more pleasing to me.” He went on to say that the family is extremely proud of his achievement, and it gives him satisfaction to watch his son achieve the goals that he set for himself.