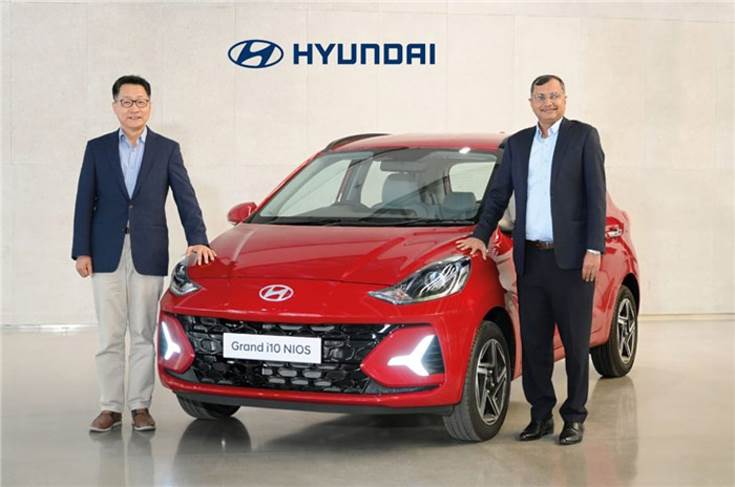 The facelifted Grand i10 Nios now sports a new front bumper that houses the black enlarged grille, which is flanked by new tri-arrow-shaped LED DRLs and side intakes. Along with a new set of 15-inch alloy wheels, the hatchback also sports new LED tail-lights which are connected by a light bar. Hyundai is now offering a new Spark Green colour alongside the Polar White, Titan Grey, Typhoon Silver, Teal Blue and Fiery Red options.

On the inside, the hatchback’s cabin layout remains the same but now features new grey upholstery for the seats, a revised instrument cluster and footwell lighting.

The facelifted Grand i10 Nios remains mechanically unchanged and is powered by the same 1.2-litre petrol engine from the outgoing car. This unit churns out 83hp and 113.8Nm while being mated to a 5-speed manual or an AMT gearbox. Additionally, the hatchback also gets a factory-fitted CNG kit with the 1.2-litre petrol engine which develops 69hp and 95.2Nm of torque. This is only offered with a 5-speed gearbox. However, the facelifted hatchback no longer gets the 100hp, 172Nm, 1.0-litre turbo petrol engine from the outgoing model as it has been discontinued, for now.

The facelifted Grand i10 Nios is being offered in four trims – Era, Magna, Sportz, Asta – and gets a bunch of new features compared to the outgoing model. These include an updated safety kit in the form of four airbags along with ABS and EBD as standard. Additionally, the top-spec version gets six airbags, ISOFIX anchorages, ESC, hill-hold assist and automatic headlamps.