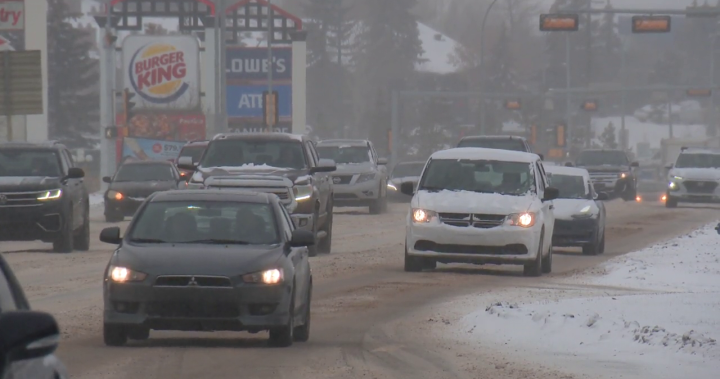 Poor road conditions have yet to improve in central Alberta and drivers are being warned to execute extra precauton while behind the wheel.

After a rough weekend on Highway 2, Leduc RCMP said there was a collision near the Edmonton airport in the southbound lanes of the QEII Monday morning. All lanes have since been cleared, but police are warning drivers of ice-covered roads along the highway between Edmonton and Calgary and are urging drivers to take “extra precaution when travelling on icy Alberta roads.”

“Winter conditions are now fully upon us,” Cpl. Troy Savinkoff told Global News. He said the RCMP recommends people put winter tires on their vehicles, have an emergency kit in their vehicles in case of emergency or long traffic waits, check roads before hitting the road and watch speed.

Speed is almost always a factor in collisions when there are poor road conditions and low visibility, like there was this weekend, Savinkoff said.

The highway saw extensive action this weekend, as multi-care pile ups, flipped trucks, jackknifed semis and vehicles littered the ditch of the northbound lanes. Hotspots near Ponoka and Olds, Alta., were respectively problematic, leaving car and busloads of people stranded on the highway.

RCMP responded to 417 separate collisions between Nov. 4 – 6, with over 150 of those calls coming from the eastern central district, which includes the QEII and the Ponoka pile up Saturday.

Driving has been a “little bit challenging… a little slippery, a little scary,” said Edmontonian Katryna Taitinger about driving the past week.

“I saw a couple accidents, a couple cars in the ditch. I definitely had a moment where I kind of slid too. It’s not great.”

She said she has all-season tires on one vehicle, and winter tires on another and can tell the difference the winters make while on the road.

“It’s really to your own discretion because it is an extra expense, but at the same time, it would probably cause less accidents, keep everybody safer on the roads. In that regard, I think maybe it is a good idea,” she said of making winter tires mandatory in Alberta.

Aaron Sutherland, vice president of the Insurance Bureau of Canada, agreed that it’s really up to the individual but that many insurance companies provide discounts for those with winter tires.

“There is an extra expense when it comes to getting new tires, but it does reduce the risk of collision on winter roads,” he reiterated.

In the meantime, Sutherland said we all need to get into the mindset of winter driving — that means slowing down, giving more space to the car in front of you and taking extra precaution.