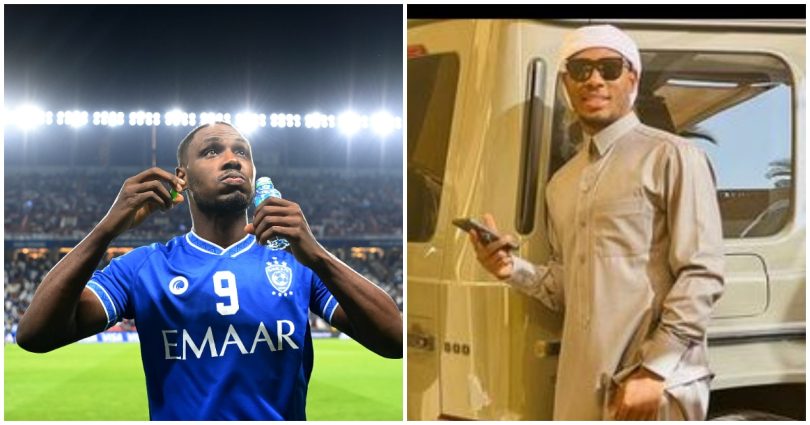 Super Eagles striker Odion Ighalo has taken to social media to show his fans his new look as he stepped out with his friends in Muslim garb showing his expensive car.

Ighalo who plays for Al Hilal is enjoying his football in the Saudi Arabian League and also in contention for the golden boot award this term.

According to the images the Nigerian shared on Instagram, Ighalo can bee seen with his Muslim friends who also posed with the big footballer.

Statement made by Ighalo

”My brothers from another mother.”

Exciting feature: Check out news exactly for YOU ➡️ find “Recommended for you” block and enjoy!

This new photos from Ighalo came hours after he missed being selected in the Saudi Arabian Eleven that faced Paris Saint-Germain in friendly match.

Ighalo missed out on the 20 players selected for the high-profile exhibition game. However, Talisca top scorer in the along, and Ighalo’s Al-Hilal his teammate, Moussa Marega made the team.

Cristiano Ronaldo led the Saudi Arabia-selected team as they suffered a 4-5 loss to PSG.

Ighalo sings along to loaded

Earlier, Sports Brief had reported how Nigerian international Odion Ighalo has fully settled in Saudi Arabia, as he was spotted cruising around town in his exotic ride.

The Al-Hilal Saudi striker has continued to get goals for his club, as they are currently third in the Professional League standings.

The 33-year was on target again as Al-Hilal held Al Nassr to a 2-2 draw in a pulsating encounter away from home last week.

He has now scored in his fourth consecutive game, taking his goals tally in the Saudi topflight to six this season.

Ighalo has already made 13 appearances for Al-Hilal in all competitions and has scored 9 goals so far, hoping to get more.

And he was seen driving around town as he listens to rave of the moment song in Nigeria, ‘Loaded’ by Asake ft Tiwa Savage.