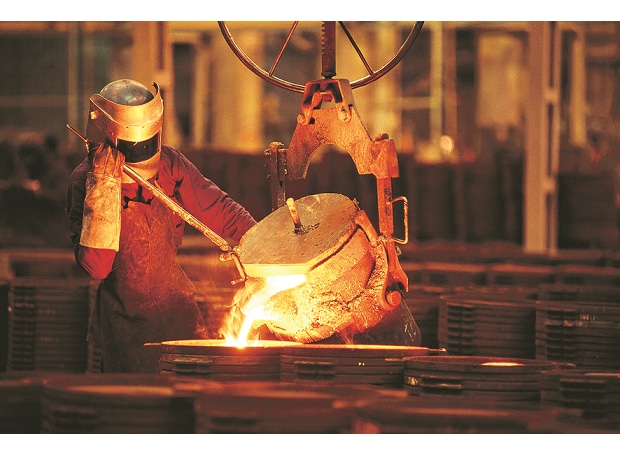 Growth in India’s factory output recovered to a three month high at 3.1 per cent in September after a surprise contraction in August, as mining and electricity output grew at a robust pace while global slowdown and elevated inflation dragged down growth in manufacturing output.


Data released by the National Statistical Office on Friday showed mining, manufacturing and electricity sectors grew at 4.6 per cent, 1.8 per cent and 11.6 per cent respectively.


Relative to the pre-covid levels, the index of industrial production (IIP) reported a healthy 8.6 per cent expansion in September, with a rise in all the categories except consumer non-durables.


During the first half (April-September) of FY23, IIP grew 7 per cent as against 23.8 per cent during the same period a year ago.


“The positive feature is the strong growth in the auto sector as well as non-electrical machinery with support from metals and non-metallic minerals. Clearly the momentum seen in the infra space has helped the cause here,” said Madan Sabnavis, chief economist at Bank of Baroda.


As per use based industries, capital goods which is a proxy for investment demand in the economy grew at a robust 10.3 per cent while infrastructure goods rose 7.4 per cent due to greater capex push by the government. However, output in consumer durables (-4.5 per cent) and consumer non-durables (-7.1 per cent) sectors contracted in September for the second and third consecutive month respectively, signaling continued weakness in demand in rural as well as urban India.


Rajani Sinha, chief economist at Care Ratings said the strong growth recorded in capital goods and infrastructure sector is encouraging and is hopefully a precursor to pick up in the capex cycle. “However, improvement in domestic consumption demand will be critical for sustained recovery in India’s growth momentum. Hence, poor performance of IIP consumer durables and non-durables is worrisome. Going forward, as inflation moderates, we are likely to see a pickup in consumption demand,” she added.


Aditi Nayar, chief economist, ICRA said high frequency indicators suggest easing of economic activity in October relative to September, owing to the relatively early onset of the festive season this year vis-à-vis 2021 and the consequent advancement of pre-festive stocking and shift in the holiday calendar. “We expect the overall IIP growth to ease to sub-2% in October, as a higher number of holidays relative to October 2021 owing to the earlier onset of the festive season and flagging external demand are likely to have constrained the performance of the manufacturing sector in the month,” she added.


Sabnavis said he expects at best stable growth in the coming months. “It does look like that while consumption has increased as indicated by GST collections, some part of the demand moved to the gold and jewelry segments,” Sabnavis said.


The International Monetary Fund (IMF), in its latest World Economic Outlook report cut its forecast for India’s gross domestic product (GDP) growth for FY23 by 60 basis points (bps) to 6.8 per cent, warning of a long and tough economic winter.


The Reserve Bank of India last month also revised its growth forecast for FY23 to 7 per cent from 7.2 per cent estimated earlier.