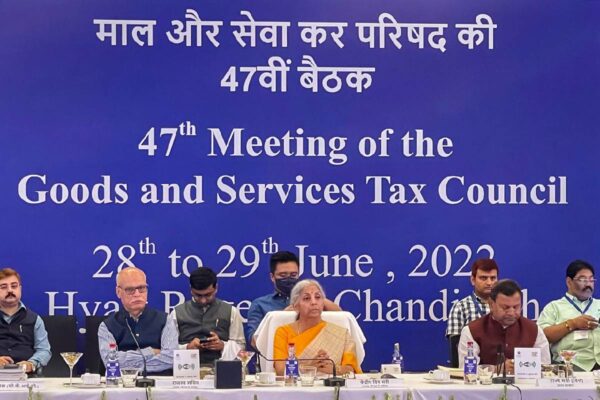 In 48th GST Council Meeting, FM Nirmala Sitharaman Might Also Apply GST On Funeral, Child Birth, Life & Death as well as Air & Water. Indians Will have To Pay GST Before They Die Else ED & CBI Might Raid Cemetery

India’s federal and state governments reached a historic agreement five years ago. From July 1, 2017, a uniform tax on goods and services, billed by Prime Minister Narendra Modi as “One Nation, One Tax, One Market,” replaced a bewildering assortment of local sales and entrance taxes.

However, the revolutionary change is being hampered by the countless compromises that were made in order to include more than one billion people who reside in 29 states.

In its 47th meeting, the GST Council unanimously resolved to raise the rates on key basic necessities. The common people may have to spend more to purchase everyday groceries after the implementation of the GST rate increase on these commodities on Monday, July 18, which would further increase their kitchen budget.

Following July 18, it is projected that prices for items like curd, lassi, rice, and other products will increase as a result of higher Goods and Service Tax rates.

A 5 percent Goods and Services Tax (GST) imposed on a number of food goods that are sold in labeled and pre-packaged form has made things worse for the middle-class population at a time when commodity prices are soaring in the market.

What Will Be the Increase in the GST Rate Mean for Consumers and Retailers?

Kitchen budgets will be impacted by the GST rate increase beginning on July 18, but retailers may also suffer some negative effects. This will put more strain on the average person, who is already experiencing the consequences of inflationary pressures due to retail inflation in June exceeding the RBI’s 6 percent benchmark by more than 7%.

Retailers and store owners, on the other hand, will struggle to adjust to the price changes.

In addition, hotel accommodations costing up to Rs 1,000 per day would now be taxed at 12%.

While growing prices for everyday commodities continue to have an impact on household budgets, the average man appears to have little relief in the near future. Not just food, but also other necessities are becoming more and more out of reach due to the rapidly rising cost of goods.

The typical Indian household budget has only become worse over time due to low wages and rising costs. After Finance Minister Nirmala Sitharaman’s major decision on the GST hike, citizens will have to pay significantly more for necessities like food while some services would be more expensive starting next week.

Prices for several essential commodities will rise beginning July 18. You will now have to pay more for basic food products.

The decision was made during the 47th GST meeting, which FM Nirmala Sitharaman headed over. She stated that beginning on July 18, 2022, some new products and some goods and services will have higher GST rates.

From July 18, the cost of agricultural products, especially those with pre-packaged labels such cheese, lassi, butter milk, packaged curd, wheat flour, other grains, honey, papad, cereals, meat and fish (except frozen), mudi, and jaggery, is expected to increase.

These products now have higher taxes. Currently, branded and packaged food items are subject to a 5% GST. Tax-free goods are those that are unpackaged and unmarked.

Middle-class families, especially struggling young people living in rented homes, would bear a greater financial burden as a result of this decision made amid record-breaking unemployment. We are hurting them when they most need comfort.

We are not far away from the situation when out dearest FM Nirmala Sitharaman Might Also Apply GST On Funeral, Child Birth, Life & Death as well as Air & Water. Indians Will have To Pay GST Before They Die Else ED & CBI Might Raid Cemetery.

Should the government reconsider and repeal the tax? All these decisions are pre-planned about how to snatch away the rights of common people and how to brutalize the common people day and night.

In July, GST receipts reached 1.49 lakh crore, the second-highest mop-up since the regime’s implementation in 2017 and 28% higher than in July 2021. Given the close link between nominal GDP growth and indirect tax collections, high retail and wholesale prices boosted greater collections.

While the cost of vegetables and other necessities has already increased as a result of rising gasoline prices, unemployment has caused a decline in family incomes.

Depriving people of their food is a ‘Acche Din’ for Narendra Modi’s government. Taking away impoverished people’s rice, wheat, milk, curd, and meat is the same as murdering them.

When it comes to fugitive business criminals like Nirav Modi and Vijay Mallya, the government is “unable” to bring them back to India while they are abroad living luxurious lifestyles, but “is all out to hammer poor people hard” at the same time.”

Finance Minister Nirmala Sitharaman stated on Tuesday that the Goods and Services Tax (GST) will not increase the burden on families.

According to Nirmala Sitharaman, there is no GST on hospital ICU beds, crematorium services, funeral, burial, or mortuary services.

In response to a discussion on price increases, Sitharaman said in a statement to the Rajya Sabha that she was trying to clear misinformation about the imposition of the fee on various goods and services.

According to her, contrary to what the opposition has stated, there is no GST on crematoriums; rather, there is just a tax on new cremation construction.

By stating that there is no GST on hospital beds or ICUs, she also aimed to clear up any misunderstanding regarding the GST and hospitals. Only rooms renting for Rs 5,000 per day are subject to the levy, she continues.

The government’s price and GST decisions affected people from birth to death, and we know you have the mandate, but is this mandate a license to brutalize the people?

Additionally, the cost of cooking gas has gone up and is now Rs 1,100. With prices this high, how will the poor survive? It hurts that this government taxes everything, even the bread consumed by patients.

People are outraged. The government in a democracy should be aware of the needs of the average citizen. But that is not the case today. People are committing suicide as a result of unemployment and the sharp increase in the price of petrol and vegetables.

But regretfully, the tax on necessities has been raised rather than the tax on consumer durables. The tax rate on grains, their products, and curd has been increased to 5%. Products like solar water heaters, leather, and services like hospital rooms above 500 and hotel rooms below 1000 have seen increases from 5 to 12 percent.

A number of commodities, including LED bulbs, ink, blades, pumps, cycles, and various machinery, have seen their prices increase from 12 to 18 percent. Contract taxes, which were previously 12 percent, are now 18 percent.

The tax rates have never been increased from 18 percent to 28 percent for luxury products. The government of India aims to erase the 28 percent rate, i.e., further cut the tax on luxury products and raise the burden on needs used by common people. As a result, the intention is extremely clear. Nothing is more backward-thinking than this position.

The proposal to raise the tax rate on necessities was met with opposition from many states. Kerala’s finance minister had written to the GoM to express his opposition to taxing necessities.

However, there was no voting. With the exception of the lottery tax rate modification, when Kerala forced a division, this has been the Council’s approach. Therefore, it is inaccurate to assert that the decision received the support of all states.

And last, now is not the time to raise the food tax rate. Retail inflation is higher than 7%. The overall price index has gone up by 15%. In the month of June, the 24 percent of the index’s weighted foodstuffs saw a growth of 16.9%. Now, the situation will undoubtedly get worse as a result of this 5% tax. Therefore, the rate increases will cause tax leakages, inflationary, and regressive.

The effects of unemployment and inflation were already having a negative impact on the public. The Modi administration’s policies are all designed to oppress the working and middle classes in order to enrich their friends in the BJP.

What The Opposition Leaders Said?

Former Karnataka Chief Minister and current Leader of the Opposition Siddaramaiah took a shot at the Central government for the most recent round of Goods and Services Tax increases on various essential food items, claiming that the government is trying to burden people with more taxes rather than helping them. He referred to the GST as the “Gabbar Singh Tax,” just like many other members of the opposition.

The AAP leader charged, referring to Sitharaman’s answer to the issue of rising onion prices in 2019 “She is wonderful. When the price of onions increased, she stated that she does not eat onions.”

The five economic pillars of savings, investment, production, consumption, and employment, according to Mr. Tewari, have been destroyed as a result of the Union government’s poor policies.

“During the United Progressive Alliance’s administration, 27 crore people were lifted out of poverty. Then, according to a research released in 2021, as many as 23 crore people have fallen back into poverty,” he added, adding that 77% of the country’s wealth is held by 1% of the population.

The number of billionaires in India had climbed from 100 to 142 in these years, according to him, and the combined fortune of the 92 richest Indians is equal to that of 55 crore people.

India’s real economy, which was already in the worst condition in decades, was significantly disrupted by the pandemic, taking hundreds of millions of lives or restricting them. However, it had benefited billionaires like Adani who were unaffected by such circumstances.

In conclusion, the government’s move to demonetize high-value currency notes on November 8, 2016, caused the economy to deteriorate. Next, the Goods and Services Tax (GST) was implemented, which hurt over 2.3 lakh small businesses. The government has now raised the GST on pencils, sharpeners, paneer, curd, and flour and did not spared no one, not even children.

The average person suffers the most every time the government enacts a new rule or law. It appears that GST will be charged to regular people for each breath they take.

There will come a time when FM Nirmala Sitharaman may also apply GST to air and water, as well as to life and death, childbirth, and funerals. Indians Will Have To Pay GST Before They Die Or Else The ED and CBI may raid a cemetery.