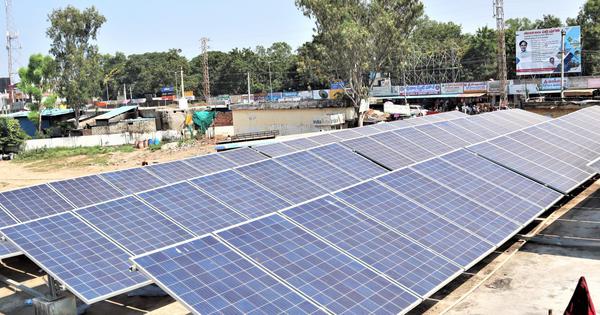 India’s Rooftop Solar programme has received a four-year extension and now aims at achieving its target of 4000 megawatt (40 gigawatt) rooftop solar capacity addition, by March 2026. The programme, which has a significant role in achieving India’s total capacity target in solar energy, was already lagging. India had achieved just 7.9 gigawatt of installed rooftop solar capacity as of June 2022. The deadline extension is not a promising sign, opine experts.

Through an order issued in the first week of October, the Ministry of New and Renewable Energy extended the deadline of the Rooftop Solar Programme Phase-II from the original deadline of December 2022. The ministry said that the Rooftop Solar Programme Phase-II has been extended till March 31, 2026, without any financial implication, i.e., within the originally approved total outlay of Rs 118.14 billion for both components of the programme – the incentives to distribution companies and Central Financial Assistance to the residential sector. After achieving the prescribed capacity target, any savings from both components will be utilised to support additional capacity in the residential sector, the order says.

Experts do not see this as a good sign and claim that the government either has no confidence in the ecosystem it is creating or does not prioritise the programme.

An energy economist and South Asia director of the Institute for Energy Economics and Financial Analysis, Vibhuti Garg, says that the progress in Rooftop Solar Programme was already going slow, even though the sector has several advantages, because of reasons such as decentralised renewable energy and poor financial health of distribution companies. “I am getting a sense that the government will no longer make this (solar energy) an attractive market, but they think that we will achieve the 40 gigawatt target by 2026, at the same pace. So, it is not a very good time for the sector.”

Similarly, another expert from a global consultancy company who prefers to remain anonymous, says that latest developments, such as extension of the deadline to achieve targets, indicate that the Rooftop Solar Programme is not the government’s priority. They are focused more on large-scale utility and feel that the decentralised solar sector will grow automatically at its own pace.

India, under the Jawaharlal Nehru Solar Mission, had a plan to achieve 20 gigawatt of solar capacity by 2022. In 2014, Prime Minister Narendra Modi announced that India will achieve 100 gigawatt of solar capacity in the same time frame. Out of this 100 gigawatt, 40 gigawatt was supposed to come from the Rooftop Solar Programme. It was given due importance because of the immense potential of decentralised solar setups in India.

With more than 300 million households and an average of 300 sunny days each year in India, rooftop solar installations in residential spaces have tremendous potential in the country, notes a report published in October by JMK Research & Analysis and Institute for Energy Economics and Financial Analysis, that focused on the Indian residential rooftop solar energy sector.

Given this potential, the government of India has been making decisions on the rooftop policy, at regular intervals. On December 30, 2015, the Centre approved a programme – Grid Connected Rooftop and Small Solar Power Plants Programme – for the installation of 4,200 megawatt rooftop solar plants in the country by the year 2019-20.

In 2017, the Ministry of New and Renewable Energy launched the Grid Connected Rooftop and Small Solar Power Plant Programme with an increased budget of Rs 50 billion for rooftop solar projects up to 2019-20. Realising the shortcomings of Rooftop Solar-1 articulated by independent experts, the Ministry of New and Renewable Energy came up with Rooftop Solar-2 on February 19, 2019. In the new notification, it was said that distribution companies and its local offices would work as nodal points for the implementation. All these efforts were intended to achieve the 40 gigawatts by December 2022.

Experts blame the financial costs for rooftop solar not becoming popular. While talking to Mongabay-India, Senior Programme Lead from Council on Energy, Environment and Water, Neeraj Kuldeep said that rooftop solar adoption has been very slow, especially in the residential sector. There are several reasons for the slow progress. Installing solar is still an expensive option for many. There is a lack of awareness as well. In addition, consumers are getting subsidised electricity from electricity distribution companies.

There are also certain market-centric challenges. Companies engaged in the rooftop solar business prefer economies of scale. In India, 3 kilowatts to 5 kilowatts of solar panels are enough to meet the annual consumption of a normal household. This is far lower if compared with industrial or commercial consumption. For a company to achieve one megawatt of the target, it would need about 10 to 20 commercial consumers versus 200 residential consumers. Each consumer has to be convinced regarding solar’s benefits and its economic viability etc. So, rooftop solar companies prefer servicing industrial or commercial consumers.

Responding to the question of why utility-scale solar programmes are doing well but the rooftop solar programmes are not, Kuldeep said that rooftop solar is more consumer driven and the cost is a factor to consider. However, more recently, many states have developed a favourable policy and the Ministry of New and Renewable Energy now also has a centralised platform where consumers can register themselves and claim subsidy.

Garg from Institute for Energy Economics and Financial Analysis says that earlier there was no quality control and that prevented households from adopting rooftop solar. Now that the government has come up with a centralised system, it has brought its own set of problems. All the players who are going to install solar rooftops have to be listed with the Ministry of New and Renewable Energy. Though it controls the quality control issues, at the same time, it restricts several players, she says.

Several experts, while talking to Mongabay-India, admit that Indian consumers get low-priced (subsidised) electricity and hence, it does not make sense to invest upfront in solar rooftop installation. Garg lists tariff structure and problems regarding the rooftop space, as major hurdles. “Setting up a solar rooftop system means high capex upfront capital costs. And that was one of the big reasons many people did not adopt it,” she adds, saying that the way buildings are designed these days, one family gets exclusive terrace rights. These families do not have sufficient reason to compromise with these exclusive rights they have, and that too for others.

gives another perspective. As per it, India has been the world’s least-expensive residential solar power market for about a decade. The report says that in 2020, the average cost of a residential rooftop solar system in India was $658 per kilowatt. If compared with other leading rooftop solar residential markets like Japan, the United Kingdom, Switzerland, and the United States of America, it is three to six times cheaper. Despite this, Indian consumers find installing rooftop solar expensive.

The report goes on to say that uncertainty in policy and regulations, delayed subsidy disbursal and rising solar equipment costs also act as restraints.

The report gives details of Gujarat’s success story in the residential rooftop segment. In August 2019, the state government introduced a subsidy scheme for installing solar rooftop systems called the Surya Urja Rooftop Yojana Gujarat scheme. With the goal of 1600 megawatt of solar rooftop systems covering some 8 lakh households by 2022, the scheme was developed exclusively for the residential category. To implement the scheme, Gujarat Urja Vikas Nigam Limited was the nodal agency but the state’s distribution companies implemented the scheme and disbursed the subsidy. As a result, the state’s residential rooftop solar segment grew from 85 megawatt in 2019 to 1,227 megawatt in financial year 2022.

The state focused on four pillars for the execution of the programme – ensuring adequate supply by building a large base of empanelled Engineering, procurement, and construction contractors, ensuring adequate demand through consumer awareness initiatives, end-to-end digitization from registration to subsidy disbursement, and timely disbursal of subsidy.

However, an expert says that Gujarat is facing a new set of challenges. He says that the power distribution companies in Gujarat were proactive, so the proliferation happened faster. Now, these companies are facing problems since a good amount of electricity coming into the grid is from residential rooftop solar. This is not a uniform supply, so the distribution companies face challenges regarding scheduling. This is happening in the Kachchh region where the penetration of residential rooftop solar is higher, he claims.

This article first appeared on Mongabay.