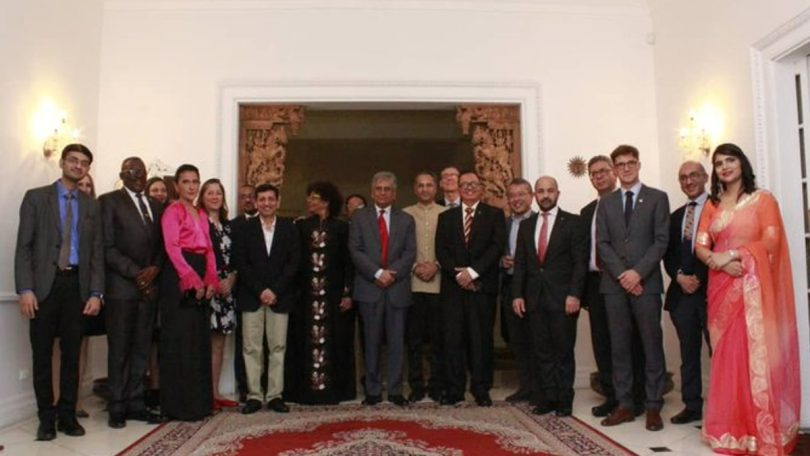 India is looking at the Latin American and Caribbean (LAC) region for energy security, among other issues during Saurabh Kumar, Secretary (East), Ministry of External Affairs four-nation tour to the region, where his first stop will be in Venezuela. The Secretary (East) is on a ten day visit to the region – starting from Venezuela; he will visit Colombia, Panama and will conclude his visit in Guyana on November 28.

According to MEA officials, his visit to the LAC region is primarily for Foreign Office Consultations with the four countries. Among other issues, he expected to take forward ongoing talks with countries like Guyana, Colombia for deeper cooperation in the energy sector.

According to a senior officer, the Foreign office Consultations between India and Venezuela are taking place after a long time. Due to the ongoing Russia-Ukraine war, India has requested the US help to recover its dues from the sanction hit Venezuela.  India’s request is being handled by the Department of State of the US for the payments of its public sector enterprises which are stuck in Venezuela.

Also Read: Russia-Ukraine crisis: India hopes to get back its dues from Venezuela

According to former Ambassador of Colombia to India Mariana Pacheco, “The visit marks the continuation of the importance of Colombia to India and vice versa in political and commercial terms, and especially in the context of Latin America. Bilateral relations have deepened and strengthened and the visit of Secretary Kumar is the result of this hard work and progress.”

“India is Colombia’s third largest market for oil and ONGC Videsh has important investments in oil fields in Colombia and an increasing collaboration with Ecopetrol, which is Colombia’s oil company,” she told Financial Express Online.

Adding, “The two countries have four MoUs which are almost ready to be signed. These include one in medical research with the Indian Council of Medical Research (ICMR); another that aims to strengthen the pharma relationship; and between our regulatory agencies, and one on biotechnology. A joint venture is already between Genova pharmaceuticals and Vaxthera a Colombian pharma company for the production of vaccines and other biosimilars for the Colombian market and the rest of Latin America.”

Can Colombia be a gateway to the Americas?

Yes, according to the former envoy of Colombia. “Colombia could be a hub for the rest of the Americas. And these MoUs once inked will provide further collaboration between Colombian pharmaceutical companies and excellent Indian and recognised Indian companies.”

Also Read: The energy-synergy of India: Associations with Colombia, Guyana and Venezuela

Financial Express Online has reported earlier that the two countries have signed a MOU on aerospace development for peaceful purposes in 2021 and there is ongoing space cooperation under this MOU. “More importantly there is interest from Colombia in getting India’s support for harnessing the benefits of space technology for national development and research,” Ms Pacheco added.

In terms of trade bilateral trade has increased more than 130 percent, due to oil exports to India. “Though, there is increasing space for growth in areas such as manufacturing, technology, tractors, among other goods. And, in the multilateral arena both countries have increased collaboration, and can deepen in understanding the importance of India in a multipolar world,” she stated.

Secretary East’s visit to Panama comes close on the heels of the visit of the recently concluded visit of MoS Meenakshi Lekhi’s in April this year.

Panama is blessed with probably the largest number of Diaspora from India in the entire LAC region. There are around 20,000 Indians living in Panama which has a dollarized economy.

According to a top diplomat who wished to speak on condition of anonymity, “The country is politically stable, safe and secure environment, tropical climate all year round, warm and receptive people, availability of a wide range of food products in Panama City, Thriving tourism and Hospitality sector.”

“Panama as “Hub of Hubs” is considered as the Bridge of the World and Heart of Universe.  And for India it could be exploited to connect logistics companies, Freight Forwarders, 3PL and 4PL logistics services, including warehousing, value addition, and Supply Chain Management,” he added.

What could India do in Panama?

Panama City is seen as the Banking and Finance Hub of Americas, therefore there is a need to  open branches of some Banks from India. Also there is a need to have direct flight between the two countries. In fact Tocumen Intl Airport (Panama City) is directly connected to more than 90 destinations, especially to all the airports of the LAC region.

Proximity of Panama to USA

It can be good for taking offshore advantage of IT and ITeS projects from Panama. There is a well trained bilingual workforce in Panama and the cost of living is not very high.

Investment in agricultural lands, good ROI, re-export of agri produce (including Teakwood and Pine) to entire Americas, Europe and even to Asia (mainly Avocado, Coffee, Teak and Pine to India). There are robust investment possibilities in Apartments, Houses, Resorts, and Villas and this country is also the most sought after Retirement Destination in Central America.

Financial Express Online has reported earlier that the Caribbean nation is all set to overtake South American nation Brazil as top oil producer in the region.

India has been making efforts to diversify its imports of crude from other countries since 2020. India is in talks to buy more crude from Guyana and talks are on.