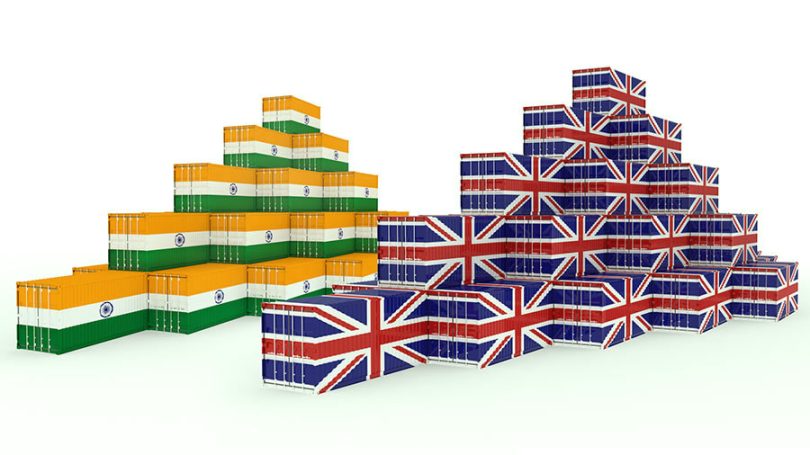 India-UK free trade agreement (FTA) negotiations completed a fifth round in July. The two countries will intensify talks over the summer as they seek a comprehensive and balanced FTA to be concluded by end of October this year. In this article, we take a look at some of the latest developments in India-UK trade negotiations and extract key points from the factsheet released by the UK Department for International Trade on August 19, 2022.

India and the UK concluded the fifth round of negotiations towards their free trade agreement (FTA), on July 29. Spread over two weeks, both sides maintain confidence in the status of their technical talks. India and UK trade negotiators have now completed discussions on 17 of the 26 chapters under the proposed FTA.

The fifth-round talks were conducted in a hybrid manner – some teams met in New Delhi while a majority joined virtual official talks. Technical experts from both sides came together for detailed draft treaty text discussions in 85 separate sessions covering 15 policy areas.

Further, the UK parliament has set up the cross-party panel – ‘India (Trade and Investment) All Party Parliamentary Group (APPG)’ – to promote trade and investment between India and the UK. APPG will support the ongoing FTA negotiations and its goals once the trade treaty is signed.

What are the next steps?

Both countries hope to complete trade negotiations by August 31 and sign a comprehensive and balanced FTA by the end of October.

Unlike traditional FTAs, the final India-UK trade deal will cover a wider range of areas, including gender, labor, trade and development, corruption, and MSMEs.

The two countries have also set up committees to discuss a totalization agreement sought by New Delhi, which will ease the social security compliance burden on Indian IT companies and remove dual social security taxation. India also wants market access to the UK legal services sector.

While there has been some instability in UK government, with Prime Minister Boris Johnson stepping down in July and a party leadership contest underway to replace him, the status of India-UK trade talks will continue undeterred, as per Indian commerce secretary B.V.R.Subrahmanyam. In fact, FTA discussions will continue intensively throughout the summer.

In India, export representative and industry stakeholders are organizing discussions to provide actionable inputs to the government so that the FTA is mutually beneficial to both countries.

The UK is keen to gain India market access for transport equipment, electrical equipment, medical devices, chemicals, motor vehicles and parts, wines and spirits, some fruits and vegetables – which could impact local industry players and/or boost the manufacturing ecosystem. On its part, India wants to increase exports of textiles, food and beverages, tobacco, leather and footwear, and agricultural items like rice – to the UK.

What were the technical areas covered in Round 5 talks?

As part of their latest round of talks, India and the UK signed agreements in the fields of education and nursing on July 21, 2022. These will ease short-term mobility for professionals and create employment opportunities.

India is the 10th largest service trade partner to the UK.

Mutual recognition of academic qualifications and duration of study in recognized and approved higher educational institutions in both countries will ease movement of professionals across the two markets (see UK government document here).

For example, Indian senior secondary school and pre-university certificates will be recognized for entry into the UK’s higher educational institutions. However, the MoU on education does not cover professional degrees, such as engineering and medicine.

The memorandum of understanding (MoU) in maritime education will ensure mutual recognition of certificates of “maritime education and training, competency and endorsements of seafarers issued by each side”. India is among the top suppliers of seafarers in the world, and this India-UK MoU opens job prospects in the British shipping sector (see UK government documents here).

As per UK government data, released August 19 – the total trade in goods and services between the UK and India increased by 35.2 percent at the end of Q1 2022 compared to the end of Q1 2021 (an increase of £6.7 billion). Trade between China and the UK during the same period also grew, but only saw an increase of 5.5 percent or £4.9 billion.

However, total trade (export plus import) between UK and India was £25.7 billion and between UK and China was £93.4 billion in the four quarters to the end of Q1 2022. It is hoped that following their FTA, India and the UK can broaden the scope of bilateral trade. The goal is to double bilateral trade in goods and services to US$100 billion by 2030.

About 70 percent of India-UK trade is dominated by the services sector, as per reporting by the Financial Express. The proposed India-UK FTA would ultimately cover 90 percent of tariff lines.

The UK Department for International Trade released the below data in August:

India-UK FTA negotiations began formally in January 2022. For a brief round-up of trade talks so far, see our article on India’s FTAs being negotiated in 2022: Updates on India’s FTAs in 2022.

If you have any questions about doing business in India or the UK, you can reach us by emailing at: UK.Ireland@dezshira.com.