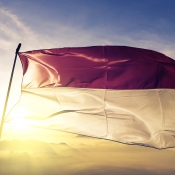 The Indonesian government will launch a second oil and gas bidding round later this year in an effort to boost the country’s output, energy minister Arifin Tasri told an industry conference in Jakarta on September 21.

The southeast Asian nation is looking to increase production to 1mn barrels/day and 12bn ft3/day, the minister said. Indonesia’s upstream oil and gas output has steadily declined over many years, but Pertamina’s 2022 guidance offers some hope.

The minister also emphasised that the potential for investment in upstream oil and gas is still wide open. “We have 70 potential basins that have not been explored,” he said. In the second bidding round, the government will offer eight oil and gas blocks.

Arifin said that the government would revise the oil and gas law and provide ease of doing business and contract certainty.