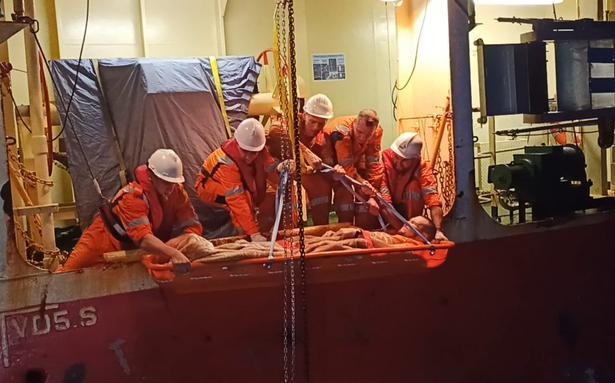 An injured Russian crew member of the Liberian-flagged merchant vessel ‘Siem Socrates’ was allowed emergency disembarkation at Vizhinjam minor port near here. Dmitrii Bytensko, employed as a wiper, had suffered a serious leg injury in the engine room of the vessel on Friday last. He is recovering at the SP Fort Hospital in Thiruvananthapuram.

The vessel was en route to Singapore from Aqaba, Jordan, when a heavy overhead installation gave way and plunged to the floor, injuring Bytensko, Dileep Vaman, Agency Manager for Sea Max Marine Services, Vizhinjam, told BusinessLine. The injured crew member needed to be disembarked at the nearest port for immediate medical care. The call for emergency assistance had come from Capt Santosh Kumar, the director of the steamer agency in Kochi.

The request was flashed to Immigration, Thiruvananthapuram; Vizhinjam port; Customs, Vizhinjam; and Port Health Organisation, Cochin. All the agencies collectively organised the emergency evacuation at the Outer Anchorage. The injured man was lowered to the port tug ‘Dhwani’, brought ashore and shifted to hospital. Ratheesh C Nair, Honorary Consul of the Russian Federation in Thiruvananthapuram, and Director, Russian Cultural Centre, called on Bytensko and offered all assistance.

The entire episode has served to turn the spotlight back on the now suspended crew change facility offered at Vizhinjam minor port to vessels sailing on the international route from Suez Canal to the Far East. The service was discontinued recently, following an order from the Directorate-General of Shipping, which provoked sharp criticism from shipping industry, the Kerala Maritime Board, and the State government.

Vessels that do not normally dock at Indian ports chose Vizhinjam for crew change due to its proximity to international shipping channels and its deep draft, especially during the Covid pandemic, yielding direct and indirect revenue to the Kerala government. But now, only previously scheduled crew changes are allowed, with the only exception being medical emergencies of the kind involving the Russian sailor, Vaman explained.