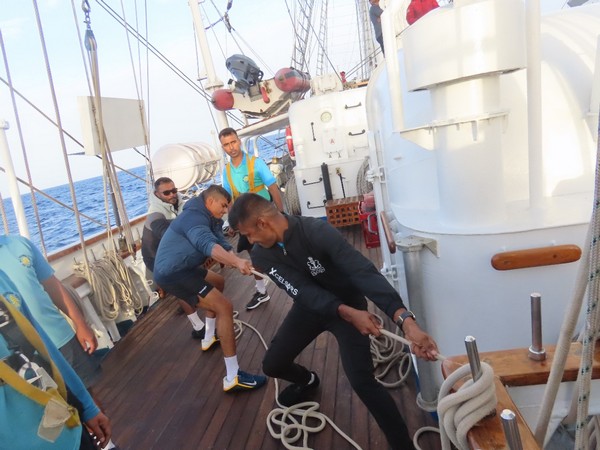 Cairo [Egypt], October 6 (ANI): INS Tarangini, the first Sail Training Ship of the Indian Navy made a port call at Port Said in Egypt on Wednesday as part of Lokayan 2022, a 14-nation voyage of the ship.
The ship was welcomed by officials of the Egyptian Navy and the Embassy of India.
During the port call, the ship will participate in various official and professional interactions and social engagements.
The ship will remain open for visitors during her stay. Indian and friendly foreign country sea trainees are embarked onboard for sail training.
INS Tarangini embarked for Lokayan 2022, a 14-nation voyage, on April 6 this year from the Naval Jetty at the Southern Naval Command in Kochi.
During her seven-month-long voyage, the ship will call on 17 ports covering a distance of 17,485 nautical miles. The voyage was flagged off by Rear Admiral Antony George, Chief of Staff, Southern Naval Command.
The voyage includes the main aspect of training under trainee officers that form a part of the first Training Squadron, as well as to participate in prestigious Tall Ship Race events in Harlingen, Antwerp and Aalborg.

“INS Tarangini, the sail training ship of Southern Naval Command is embarking for a seven-month long voyage for participating in tall ship races as well as to impart training to our sea training. The ship will touch 17 ports and visit 14 countries,” Rear Admiral Antony George had said earlier.
On the occasion of the 75th Independence Day as part of Azadi Ka Amrit Mahotsav, Indian Navy personnel onboard INS Tarangini hoist the national flag at sea in Europe, making it a highlight of the Tarangini’s voyage.
The ship will come back to Kochi in November this year.
INS Tarangini is a three-masted barque, commissioned in 1997 as a sail training ship for the Indian Navy. The ship was constructed in Goa to a design by the British naval architect Colin Mudie and launched on December 1, 1995.
She became the first Indian naval ship to circumnavigate the globe in 2003-04.
The year 2022 is of particular significance since it marks the 75th anniversary of diplomatic relations between India and Egypt.
Egypt and India also enjoy cordial defence relations. There was close cooperation between the Air Forces, with efforts at jointly developing a fighter aircraft in the 1960s. IAF pilots had also trained Egyptian pilots from the 1960s until 1984. In the recent past, since 2015, there have been several high-level exchanges of visits by defence delegations. (ANI)