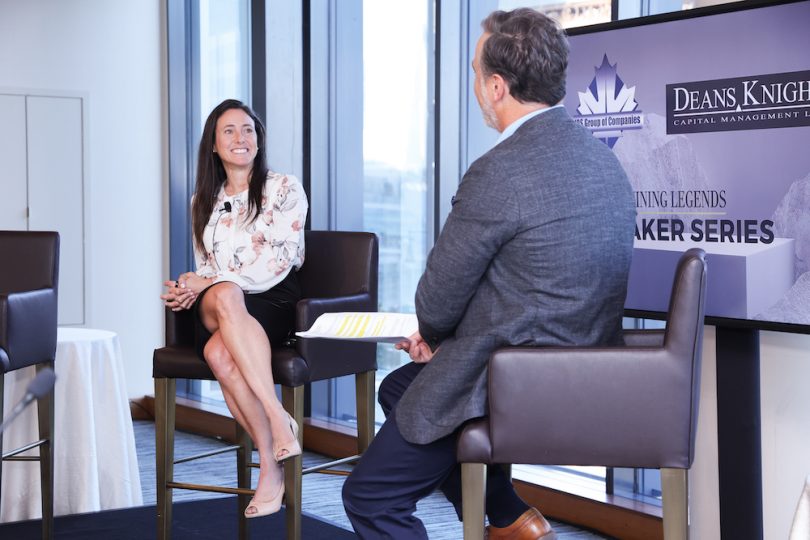 St-Germain holds an MBA in Finance from York University and began in investment banking at Dundee Capital markets, working with mining companies on M&A advisory and financing. In 2013 she joined Golden Queen Mining as CFO, and then moved to Integra Gold as CFO in early 2017 and helped oversee its sale to Eldorado Gold that same year for $590 million. She is also a director of Osisko Metals and an advisor at Wyloo Metals, which took over Ontario-focused Noront Resources (now Ring of Fire Metals) earlier this year after winning a bidding war with BHP.

St-Germain sat down in September with Anthony Vaccaro, president of The Northern Miner Group, to discuss her career so far.

Vaccaro: What are you enjoying about this phase of your career, and what are some of the challenges?

St-Germain: I’ve been on boards for the past five years – it’s a great experience because you are exposed to other companies – other management teams. You always learn from your experience with companies. It makes me a better CFO for Integra because you are connected in the industry. Every company has challenges – I think it’s the name of the game when you’re in mining. With all the developments – I think it will be exciting years.

Vaccaro:  When it came to Wyloo, what made you take on that specific challenge?

St-Germain: I think it was the team. It was a very young, dynamic team, and their vision focused on green metals. And that’s the big push to promote the industry.

Vaccaro: Why did you want to do an MBA in capital markets, and what made you specialize in mining?

St-Germain: During my MBA there were banking [recruiters] who came to the school — and I think that’s why outreach is so critical to the industry. And I think it was more following my guts.

Vaccaro: You started at Dundee [Precious Metals] with the late Ned Dundee, another Canadian Mining Hall of Fame member. Do you have any experiences with Ned you could share?

St-Germain: Over the years, I would bump into Ned in the hallways. He was on the top floor. I was at the bottom floor. He was always very kind. What I remember the most is my last day at Dundee — I was in Vancouver and flew back to Toronto just for the day and Ned said, “come see me in my office” and we sat down. He was very passionate about mining and shared some advice about the industry. I was very touched. It was just half an hour of his time, but it made a big impression on me.

Vaccaro: What was the transition like, coming out of the investment banking world to Golden Queen? What were some of the key challenges?

St-Germain: It was probably one of the scariest decisions of my life. I almost said no. I don’t want to generalize, but often women, we think about our credentials more than our potential. I’m not a CA, so I didn’t think I could be a CFO. I thought about it, and called my boss, and he said “Andree, you’re stupid if you say no. Just do it.” It was definitely a big switch. It came with challenges, the first one was my own insecurities. I think it’s normal to have insecurities, but they have to be short-lived.

Vaccaro: How did you overcome those?

St-Germain: Working hard. I’m a big believer in paying your dues. I kept my same banking hours at Golden Queen. Also, throughout my career I’ve had a lot of great champions who have supported me. In the case of Golden Queen, I had a lot of support from the board and from the CEO. So that gives you confidence as well. At Golden Queen it was a pretty lean team, so you wear a lot of hats — not just budgeting and accounting, but project financing, HR and IT compliance all falls on you. I think one thing that helps is you need to be humble and understand that you can’t do everything. You can’t be an expert at everything. You’re not expected to. I have my specific skill set, and the skills that I need help with — that’s where the team comes in. It’s about leveraging those resources.

Vaccaro: What about leaving Golden Queen? How did the Integra opportunity come about and why was it appealing?

St-Germain: George Salamis, the CEO approached me, and it was at the stage where the project was ready to be financed. The project was in Quebec, so it was perfect. They brought me in, and I didn’t have a day off in between — it was from one office to the other. We were about a week from signing a term sheet on the project financing when the bid from Eldorado came in. To be involved with an M&A (deal) from that perspective, the company side, was really good.  A lot of the work comes before the announcement — from the idea to the negotiation.

Vaccaro: Talk to us about some of the best advice you’ve received over your career?

St-Germain: Some of the best was to enjoy the highs because the lows are quite brutal. Professionally, some of the best advice I got was from a book by Sheryl Sandberg, Lean In, [Women, Work, and the Will to Lead] where she refers to how in the past, you had to climb the corporate ladder if you want to make it to the top. But now, you have to see the workplace more as a jungle gym, where you’ll do lateral moves. If you look back at my career – that’s really what happened.

Vaccaro: Given that the industry has been grappling with diversity in its history, how much progress has been made in the last five years? Has the pace changed fast enough?

St-Germain: I’m very impressed with the industry, genuinely. In my investment banking days, I didn’t meet too many women CEOs. CFOs, maybe. I went to countless board meetings and didn’t recall seeing many women. I would say the past five years have been a huge shift. Pretty much all boards I’m involved with have at least two women. Many companies are moving past the ‘just one woman’ on the board. And you see more women in the C-suite, which is great.

These changes take time. You need to have good retention plans in place, and training, and understand that women need a different type of mentorship sometimes, so have programs more tailored for women.