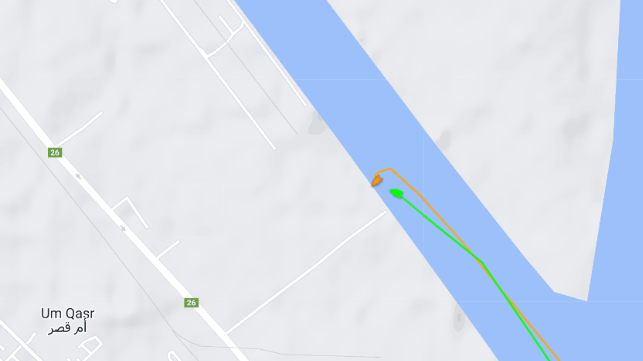 ESL Winner arrived at a small container terminal at Umm Qasr and moored at about 1230 GMT on December 24. The Baghdad arrived and approached on an apparent collision course at about 1340 hours, according to AIS data provided by Pole Star. Baghdad struck the stern of the ESL Winner at low speed, dislodging the moored vessel’s free-fall lifeboat, which landed on Baghdad’s bow, video obtained by Marritimi e Navi appears to show.

After the allision, the Baghdad moored at the same terminal, to the northeast of ESL Winner’s position. Both vessels shifted berths the next morning, then departed the port on the 26th, headed outbound across the Persian Gulf.

Baghdad is a container-capable general cargo ship owned and operated by the Iraqi government, and she has long been deployed on a regular feeder route between Dubai and Iraq.

ESL Winner is an 1,800 TEU feeder operated by Peter Doehle Schiffarts. She had recently taken up a similar rotation from Jebel Ali to Umm Qasr.