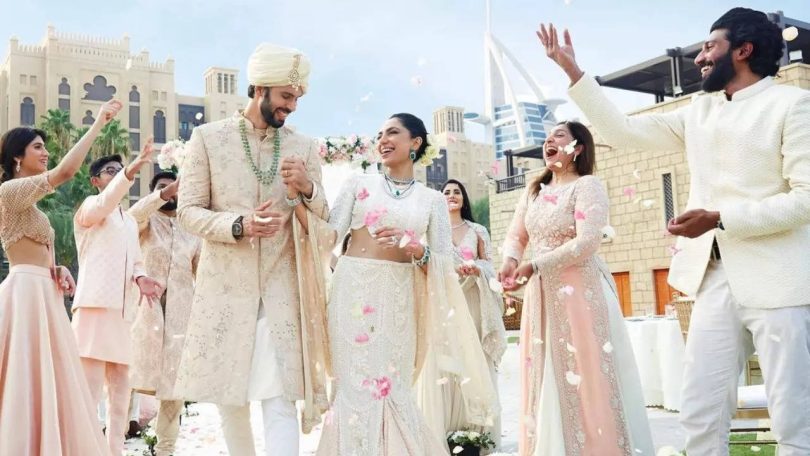 When Zoya Akhtar and Reema Kagti’s aired on the OTT platform, it caught our attention with a plot and believable performances. But, the show is incomplete without mentioning the actress Sobhita Dhulipala, who portrayed the role of an ambitious wedding planner.

Ever since then, she has been winning hearts with their strong performances and killer looks. Every time the actress graced her presence, our hearts skipped a beat.

Recently, on Monday (October 31), the Made In Heaven actress took to Instagram, dropped a carousel of pictures in the wedding attires and left everyone stunned.

Sharing the post, Sobhita penned down a long note, that reads, “Dynamic and refined, Dubai houses a tasteful tableau of escapades that delights one and all – Golden beaches, sun-soaked skylines, breathtaking venues and world-class service are just some of the reasons why this stunning city is perfect to commemorate everything from the last few days of your singlehood, the revered occasion of your nuptials, to your happily ever after.”

Soon after she shared the glimpses, fans couldn’t stop themselves from commenting on it when they saw the first picture of her walking down the aisle. One of the users wrote, “For a second, I thought your marriage images are here,” while others were relieved after reading the caption and commented, “I am still not ready for the first picture.” Some of the fans even penned down, “You can’t scare us like that sobhita please!”

Well, it seems Shobhita had us for a moment!

Besides this, the rumours mills have shared that the diva is in a relationship with Telugu actor Naga Chaitanya. Also, during the promotion of his Bollywood debut in Aamir Khan’s starrer Laal Singh Chaddha, Naga told RJ Siddharth Kannan on being asked about Shobhita, “I’m just gonna smile.”

Meanwhile, on the professional front, the actress was last seen in filmmaker and magician Mani Ratnam’s Ponniyin Selvan 1, the film also stars Aishwarya Rai, Vikram, Trisha Krishnan, Karthi, and Jayam Ravi. The film was a massive hit at the box office and was released in Hindi, Tamil, Telugu, Kannada and Malayalam.

Up next, Sobhita Dhulipala will be seen with Anil Kapoor and Aditya Roy Kapur in the remake of The Night Manager, an espionage thriller. The 2016 series features Tom Hiddleston, Hugh Laurie, and Elizabeth Debicki in the lead roles.