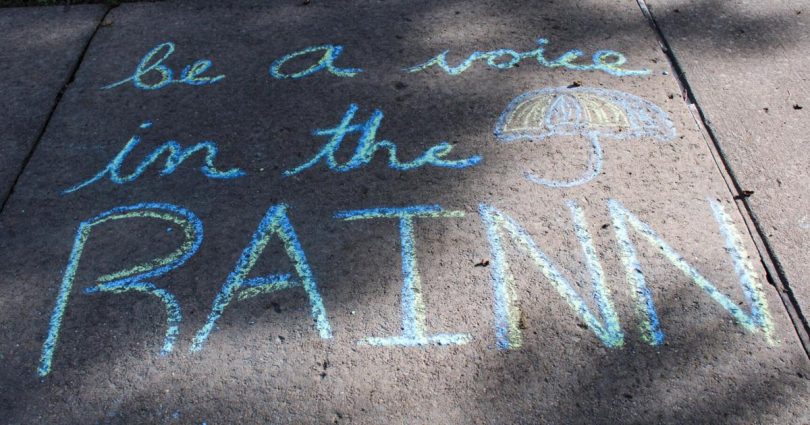 As suggested by its name, the purpose of the RAINN Day is to draw awareness to sexual violence, and to let survivors know that they are not alone.

The event consists of a setup of umbrellas all throughout the Oak Grove, in a reference to how “RAINN” is a homophone to the word rain, each umbrella having messages about sexual violence and survivors.

Some messages were comforting messages, addressing survivors, and letting them know that they are believed and that they are not alone, while others were aimed at the general public and had statistics surrounding sexual violence that many may just not be aware of.

“I think both types of messages are important,” Veronica Duran-Paramo (junior, early childhood education) said. “It’s important to comfort those who have been victims but it’s also important to educate people about it because the only way to fight a problem is by acknowledging it exists.”

While the event only took place today, preparations for RAINN Day began way earlier this month, when the Haven Project held an umbrella making workshop at Folger Student Center.

In the event, both students could make their own umbrellas to be displayed at the Oak Grove today alongside the others. Many students, including the ones who could not make it to the workshop, believe that it is important for everyone to take a stand against sexual violence.

“I think everyone should be taking a stand and raising awareness to the fact that [sexual violence] happens but especially raising awareness of what can be done about it,” Brandon Kimmel (junior, computer science) said. “Like, what are some organizations that can support survivors, that kind of thing is really important to promote.”

The Haven Project seems to share a same mindset as Kimmel, as members of the organization were handing out resources and engaging with students during the event. Many of the information pertained specifically about sexual violence against undergraduate and graduate students.

“Teaching [students] what is sexual violence and where they can turn to help if something does happen is very important,” Jenn McCroskey, sexual violence prevention educator for the IUP Haven Project, said.

“A lot of students don’t know who they can turn to if something happens, so [RAINN Day] is great a way to find connections on campus and know where they can turn for help if needed.”

RAINN statistics report that, among graduate and professional students, 9.7 percent of females and 2.5 percent of males experience rape or sexual assault through physical force, violence or incapacitation; and in general, every 68 seconds an American is sexually assaulted.

Other student organizations also had a chance to take a stand against sexual violence by making their own umbrellas to add to the Haven Project’s display.

Some organizations that had umbrellas on display at the event included multicultural organizations like the Latino Student Organization (LaSO), which had an umbrella with statistics in both English and Spanish; Greek life fraternities and sororities including but not limited to Delta Zeta, Kappa Sigma and Theta Chi; as well as other organizations such as the IUP Pride Alliance.

“It’s important to [have multiple organizations collaborating] to show that everyone is here to support one another and that organizations understand that this could happen to anyone and it’s just an opportunity for them to say, ‘hey we are here, and we are on your side,’” McCroskey said.

“It’s also important to get everyone in it because then it is more inclusive, it shows that different groups believe [in the survivors] and are here to support them,” McCroskey added.

Umbrellas were not the only thing on display at the Oak Grove during the event, as the sidewalk was still decorated with yesterday’s drawings for the “Chalk the Walk” event.

Deemed as “RAINN Day’s predecessor,” Chalk the Walk is another initiative sponsored by the Haven Project, in which students can decorate the sidewalk with messages to support survivors, similarly to what is done with the umbrellas on RAINN Day.

Traditionally both events are held back-to-back, with RAINN Day happening the immediate day after Chalk the Walk.

If you or someone you know is experiencing domestic or sexual violence, help is available.

The Office of Social Equity and Title IX has put together a list of resources which includes both how to reach out for help as well as how to file a report in the event any sexual misconduct takes place on campus. It can be found at https://www.iup.edu/socialequity/policies/sexual-discrimination-and-sexual-misconduct-resources/index.html