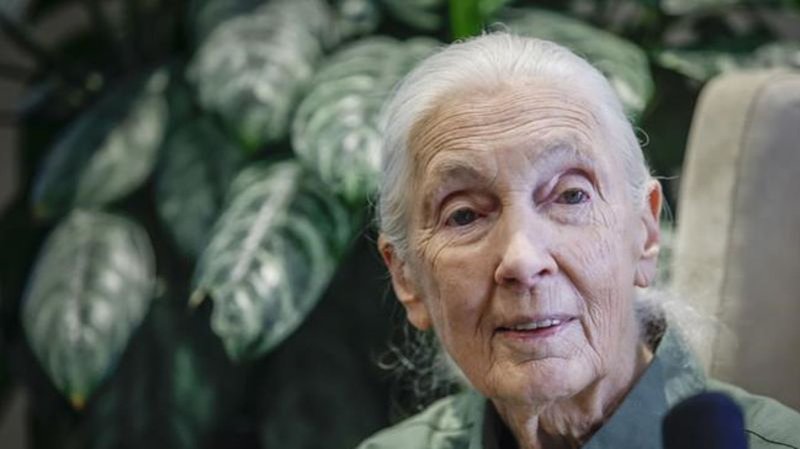 “It was a grind,” she said, “because we created virtual Jane and virtual Jane could do Zooms and Zoom interviews and attend conferences every day.”

Goodall, 88, said she keeps telling her story both online and in person to try to inspire others to find their own way to deal with threats such as climate change and the loss of biodiversity.

“We are at a critical juncture and it’s desperately important that people get together and actually take action.”

Climate change is altering the water cycle and has led to floods, droughts and wildfires. It has also driven biodiversity loss, with research suggesting that a million plant and animal species are at risk of extinction around the world.

Both have happened, Goodall said, because of a lack of respect for the natural world.

“We need to remember that we are part of the natural world and, in fact, we depend on it,” she said. “We depend on it for clean air, water, food, everything.”

Goodall said that means having a healthy ecosystem.

“I see an ecosystem as a beautiful tapestry and, within that tapestry, each species of plant and animal has a role to play,” she said. “As they become extinct from that ecosystem, it’s like pulling threads from the tapestry until it hangs in tatters and then the ecosystem will collapse.”

She said people need to learn to live with species such as wolves, which are an important part of the ecosystem, and people also need to do their part to help restore nature.

“I think we’ve somehow got to reach into people’s hearts,” she said.

“You’ve got to find stories to help them realize that this is a crisis, but I actually can do something.”

Some, she said, may feel as though they are just one person who picks up plastic trash each day and isn’t making much of a difference. “But, when you think that there are millions of people picking up bits of trash, you realize it is making a difference. Collectively, a big difference.”

Goodall said Roots and Shoots, a youth leadership program that’s part of the Jane Goodall Institute, helps young people figure out how they can help.

“If our young people lose hope, we’ve had it,” she said. “It’s not true that nothing can be done.

“We’ve got this window of time — I have no idea how big that window is, I know it’s still closing — and so Roots and Shoots is about giving young people hope by empowering them to take action, to choose themselves projects to make the world a better place.”

She said the program has members from kindergarten to university, and adult groups are also forming.

“This is my greatest hope for the future,” said Goodall.

“That, and our brain that is beginning to turn to finding ways to heal the harm we’ve inflicted and the resilience of nature — that places we have destroyed can once again support nature and animals on the brink of extinction have been rescued.”

This report by The Canadian Press was first published on June 24, 2022.