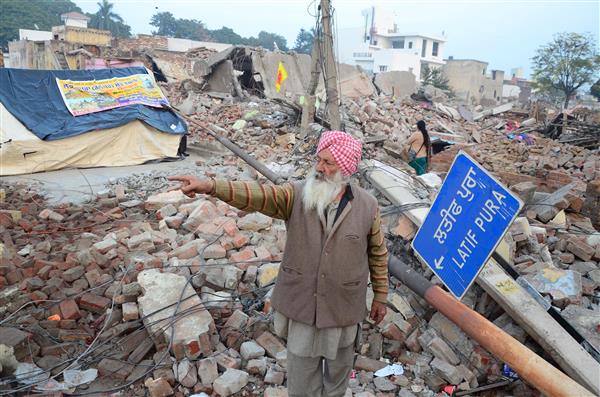 In yet another exercise to assess the claims of families whose houses were demolished by the Jalandhar Improvement Trust, the administration has come up with a list of electricity connections.

A total of 24 meters were removed by Punjab State Power Corporation Limited (PSPCL) from the site and the first meter was installed in 1997 in the name of Chanan Singh.

As many as 17 connections were installed after 2000, at a time when dairy owners were shifted to the Jamsher Dairy Complex. At least six meters were installed between 2016 and 2017 and some as recent as 2021.

A senior official said, “A power connection is a pre-requisite, which every dweller applies for as he settles down at a particular place. The fact that there were no connections listed with the PSPCL any time prior to 1997 clearly shows that they had no link with Partition as claimed by the families for garnering sympathy.”

Mohinder Singh Bajwa, who, along with his brother, had occupied 40 marlas at the site and has been on the forefront since the anti-encroachment drive, has a meter in the name of his wife Rajwinder Kaur, installed in August 2016.

The administration also found out that the names of connection holders were different from those of the litigants in the case.

The authorities claimed to have an affidavit of Gulshan Kumari, who stated that she was actually a resident of Rayya in Amritsar, but had a shop in Latifpura. In reality, there was no shop in Latifpura, said the administration.

The SDM and JIT officials said they were looking for more such evidence to be doubly sure of all claims and counterclaims as more than 60 families had started claiming compensation after getting to know of the special package being offered by the state government to the needy families.