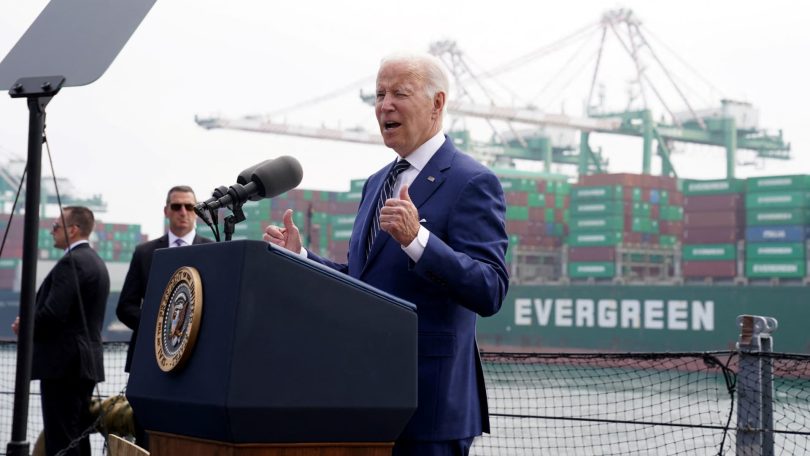 President Joe Biden slammed Exxon Mobil on Friday for what he described as the oil giant’s greedy reluctance to produce more petroleum, just hours after U.S. economists said inflation in May rose at levels not seen since the early 1980s.

Asked by a reporter if his administration has plans to “go after” oil company profits, Biden launched into a verbal attack on Exxon, one of the largest oil producers in the world. Gas prices have played a major role in rising costs for consumers.

“Why don’t you tell them what Exxon’s profits were this quarter?” Biden advised the reporter. “Exxon made more money than God this year.”

Biden, who spoke from Los Angeles, went on the offensive during a press conference designed to address the Labor Department’s monthly consumer inflation report that came out earlier Friday.

Government economists found that prices rose 1% between April and May. The jump last month pushed the national year-over-year price increase to 8.6%, the hottest rate since 1981.

Exxon objected to several of the president’s accusations.

“We have been in regular contact with the administration, informing them of our planned investments to increase production and expand refining capacity in the United States,” Exxon Mobil spokesperson Casey Norton told CNBC.

U.S. President Joe Biden speaks during a visit to the Port of Los Angeles, during the Ninth Summit of the Americas in Los Angeles, California, U.S., June 10, 2022.

Biden also spoke about the broader inflation trends and again blamed Russian President Vladimir Putin and Russia’s invasion of Ukraine for record-high gasoline prices. The national average price for a gallon of regular gasoline reached a new all-time high on Friday at $4.986.

The president pinned part of the blame for high fuel costs on Exxon and other oil producers for what he called a failure to increase supply to reduce prices.

“One thing I want to say about the oil companies: They have 9,000 permits to drill. They’re not drilling,” he continued. “Why aren’t they drilling? Cause they make more money not producing more oil — the price goes up.”

Exxon, the top U.S. oil producer, announced in April that it intends to triple the size of its stock buyback program and repurchase up to $30 billion in shares by the end of next year. The total compared with its earlier estimates for $10 billion in repurchases.

In the first three months of 2022, Exxon distributed $5.8 billion to shareholders, including $3.8 billion in dividends and $2.1 billion in stock buybacks.

The president wrapped up with a specific directive to the petroleum producer: “Exxon: Start investing, start paying your taxes.”

Industry officials say that Biden’s tough posture toward oil and gas during his 2020 campaign and his presidency have cooled relations between the White House and producers. They also deny the administration’s claim that they would take advantage of global crisis like the war in Ukraine to price gouge.

Exxon added that it plans to spend 50% more in capital expenditures in the petroleum-rich Permian Basin in 2022 compared to 2021 and is boosting refining capacity for U.S. light crude oil to process about 250,000 barrels more per day.

Biden’s comments on Friday stand in contrast to those made a day prior by his Treasury Secretary, Janet Yellen. Asked why energy producers have been hesitant to drill, Yellen replied: “I think they are beginning to do it now.”

Asked again if she believes corporate greed caused the current rash of inflation, she responded that she sees “demand and supply as largely driving inflation.”

“I do think it’s appropriate to have a strong anti-trust policy. But price-cost margins have gone up in many sectors, but I don’t think that’s what’s driving inflation.”

Biden has tried to show efforts to control inflation as the issue sits near the top of voters’ minds ahead of November’s midterm elections. Before he spoke in Los Angeles, Biden acknowledged the pain caused by inflation and pushed for several general policy fixes.

“Make no mistake about it: I understand inflation is a real challenge to American families. Today’s inflation report confirms what Americans already know: Putin’s Price Hike is hitting America hard,” Biden said in a statement. “My administration is going to continue to do everything it can to lower prices for the American people.”

Biden called upon Congress to pass legislation to cut shipping, prescription drug and energy prices, and touted efforts to ramp up U.S. oil and gas production. At the same time, he warned energy executives in a statement against abusing a contraction in global petroleum supplies “as a reason to make things worse for families with excessive profit taking or price hikes.”

Economists say that, while the president and his economic team are doing all they can to boost the supply of goods and services, everyday Americans will likely have to wait a while longer for price increases to slow down.

The Federal Reserve, the U.S. central bank in charge of managing inflation, has started to raise interest rates and pull back on Covid-19 stimulus in an effort to check consumer and corporate demand for loans.