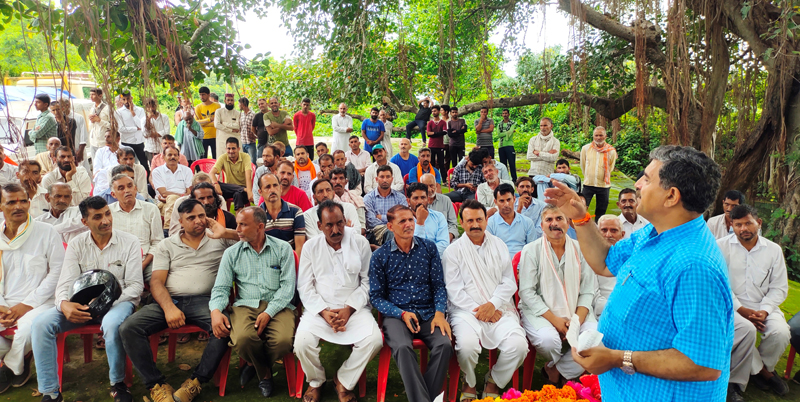 JAMMU, Aug 20: Jugal Kishore Sharma Member of Parliament BJP from Jammu -Poonch Lok Sabha constituency along with DDC Joginder Singh and senior leaders BJP Kali Dass,Ved Parkash today visited village Kool Padmi, Galali, Gorda-Lassu and adjoining areas of block Mathwar and laid foundation stones for two roads under NABARD in Block Mathwar Nagrota constituency.
Jugal Kishore Sharma, while speaking on the occasion said Kool, Kaintha, Keri Rabta, Gorda, Lassu, Tung are the far flung areas of block Mathwar and it was the burning demand of inhabitants to get better road connectivity. He said that mostly during the rainy seasons roads get washed away and also observe heavy landslides which disconnects the area for many days and people will not able to move easily for their day to day work .Member of Parliament said that road from Agore Rabta Kool-Padmi to Link Keri via Kool Kentha is stretched over the length of 4.3 Kilometers and get constructed with cost of Rupees 5.25 crore approximately will provide connectivity to the Kool, Garnai, Kaintha, Bhagatan Mohalla, Keri and connects it with village Sarote.
He said that in adjoining to it efforts were made to construct the road from Gorda Talab to Tung Lassu stretched over the length of 2 Kms will connect far flung area of Gorda Lassu under NABARD costing Rupees 2.63 crores. He said that both roads are very important as they connect a large area which is very thickly populated.
Jugal Kishore said that Bharatiya Janata Party is working on the agenda of “Sabka Sath Sabka Vishwaas” and to provide connectivity to rural and far flung area is our first priority. He said that under the stewardship of Prime Minister, Narendra Modi India is reaching to the great heights and tremendous development is observed in all the sectors and segments and many mega projects have been also initiated which will bring our country to the new era.
Joginder Singh Kaku DDC Member complimented Member of Parliament for visiting far flung villages of Mathwar Block and for laying foundations & kick starting construction of two important roads under NABARD.
BDC Sharifa Bibi,Mandal president, BJP Kali Dass, Prabhari Ved Parkash, AEE PWD Rahat Gupta and others also present at the occasion.