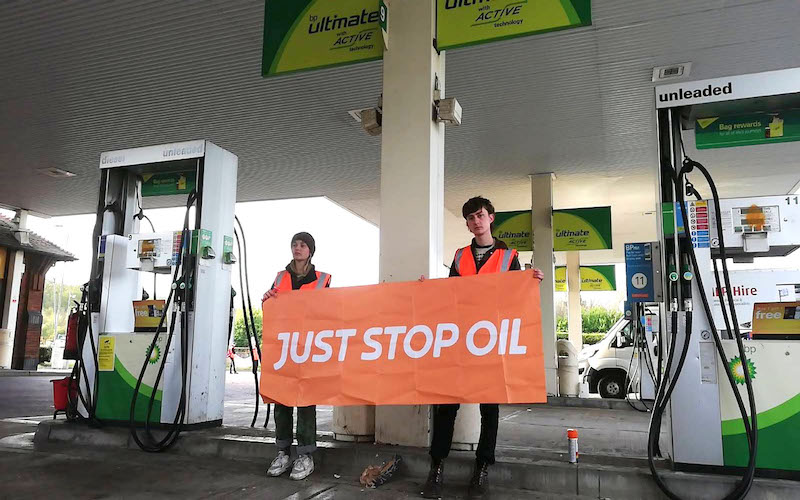 Activists part of the coalition of environemntal groups Just Stop Oil have been painting the town in orange as an act against the government.

Just Stop Oil groups are working together to ensure that the government commits to ending all new licences and consents for the exploration, development and production of fossil fuels in the UK.

For the past month, the groups have been going around London blocking roads, throwing soup and giving the city a fresh coat of orange paint.

One of their most notable acts was when two female supporters of the activist group threw soup over Vincent Van Gogh’s Sunflowers painting on their 14th day of demanding the UK government to halt oil and gas projects.

The women threw the contents of two Heinz Tomato Soup onto the painting which has an estimated value of $84.2 million in the National Gallery at Trafalgar Square.

Most recently on November 8 supporters have climbed onto motorway gantries around the M25 as part of their campaign.

From 7:00 approximately 15 supporters climbed up onto the gantries in multiple locations both clockwise and anti-clockwise causing police to halt traffic.

Edred Whittingham, 25, a student from Cambridge said: “Politics is broken in this country, and it’s up to everyday people to fix it.

“We are living in a time when millions of people are literally going hungry or freezing to death in their homes, while fossil fuel companies are making record profits.

“We can change this, but we need to resist. Climate change will destroy the global food system while displacing hundreds of millions of people from their homes, leading to starvation, war and social unrest.

“For our government to be still approving new fossil fuel projects is an act of genocide.”

Following four weeks of continuous disruption and civil disobedience by supporters, the police have made over 700 arrests, including 25 last Monday.

The movement is rapidly growing with the group holding 20-30 public meetings per week, online and in person, across the UK.

However, since the campaign began on April 1st, Just Stop Oil supporters have been arrested nearly 2,000 times, with 6 supporters currently in prison.